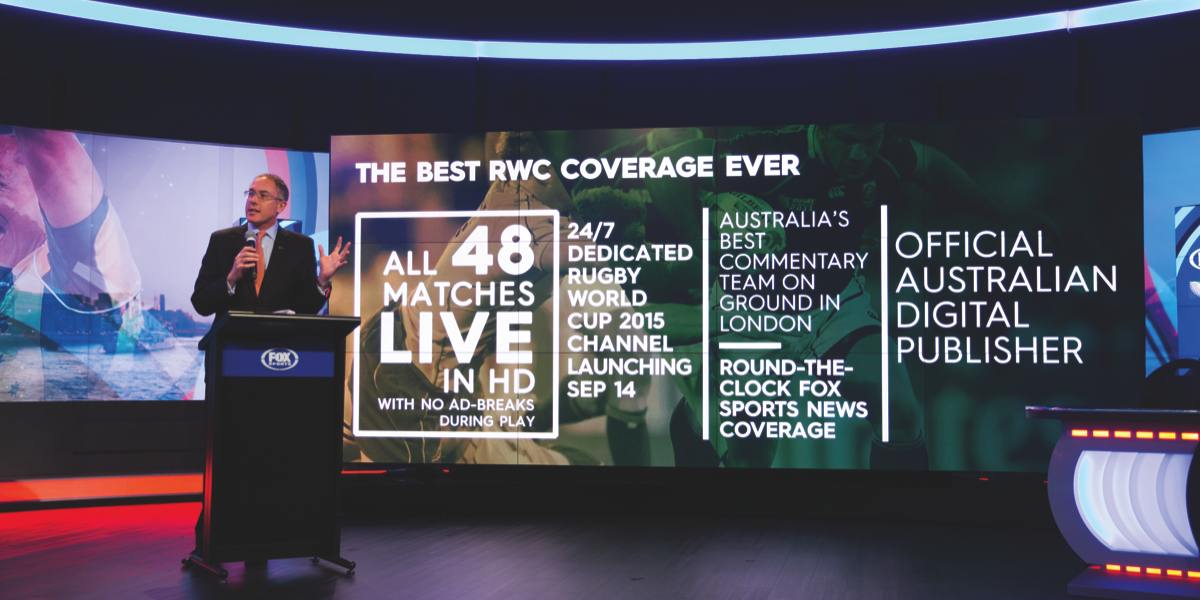 The expectation that it will be the best Rugby World Cup in history is very real, and the best place to see rugby’s showpiece event is on Fox Sports,” the network’s Nick McArdle said at the launch event for its coverage of the upcoming tournament. Kicking off next month, Fox Sports will launch a 24-hour dedicated channel showing each match between the world’s 20 best teams live and in HD with no ad breaks.

“They are the best in the business, and the stats are just extraordinary. We have five members of the 1999 [winning] World Cup Squad, and the best caller in the business, Greg Clark. We also have experienced rugby journalists McArdle and Maloney. Between them, our hosts have 62 Rugby World Cup Games and 393 Wallabies Tests, and our professional hosts will bring that out of them,” Fox Sports CEO Patrick Delany told the crowd sitting in makeshift bleachers inside Fox Sports’ Clive Churchill studio for the launch.

His enthusiasm wasn’t limited to the commentary team. “It’s Fox Sports’ best year of sports, and our best-ever Rugby World Cup presentation and probably one of the best things we’ve ever done. If you look not just at the presentation but across digital and TV as well, it’s very comprehensive. Join us in London! When I first took the reins at Fox Sports it was in New Zealand, and now it’s in one of the great cities of the world with some of the great rivalries of the world. Australia and England is a great rivalry – clearly, we have got something to make up for on the rugby pitch! When you throw in South Africa and New Zealand too, you really get some fantastic rivalry that goes across cricket and rugby,” he continued.

Delany said that the Rugby World Cup broadcast would represent a culmination of Fox Sports’ experience over the past 20 years of existence. “We’ve thrown every trick we’ve ever done at this, we’ve put it all in. It all starts with 48 live games, every one of which will be broadcast in HD and we will be ad-break free. We have the best team in the business, and the only Australian team on the ground. If we didn’t have the names that we do, we wouldn’t really be adding much. But when you add all those amazing guys who have played on the Rugby World Cup stage, they can tell you about it and take you closer. We will have round-the-clock coverage from Fox Sports News and our digital assets,” Delany said.

Fox Sports is also the official Australian digital publisher of the Rugby World Cup, allowing it to deliver extensive coverage and video highlights across all devices. “These rights are tightly held, and we have them all,” added Delany.

Although rugby union is less popular with Australian television audiences than NRL or AFL, Delany hopes to appeal to the general public with the coverage. “We call on all Australians! Let’s face it, our chips have been somewhat down. In 2011, we had such an amazing Super Rugby season, record ratings and it really built up the World Cup. The trophies have been a little bit harder to come by this year, so [when we created the promo] we thought about sport. Sport is very much about hope and faith and optimism, and having faith in your team, your players and your coach. That’s what we love as fans, so we’ve built a campaign calling on Aussies to believe in the Wallabies. Our proof point is this – never underestimate an Aussie, especially on the world stage!”

The network is also launching a host of new formats for the duration of the World Cup.

“When we did our Cricket World Cup channel, one of the really big hits was Cricket Legends which was hosted by Crash Craddock. Some of those guys, especially Doug Walters, were incredibly popular. The first time we showed it we had an audience of 50,000. And every subsequent time we showed it, we had 50,000 – it didn’t matter if we put it on at 1am! We thought we were certainly onto something, so this time around we’re doing Rugby Legends, with a seriously good set of legends,” said Delany.

Host Tim Sheridan: “There has been some amazing history and of course the best way to get that history is directly from the people who wrote it. We’ve had a wonderful time, not just talking about the World Cup but their whole careers and the context in which they’ve achieved everything. We talk to Ealesy about the influence of his 4ft 10in grandmother and turning his back on New Zealand doing the Haka. Timmy Horan talked to us about his time at Souths when Jason Little put a dead python in his match bag. We’re talking to players from South Africa and England. It’s a cavalcade of memories that any rugby fan will want to feast on. There’s a lot of World Cup stuff, a lot of Tri-Nations and Bledisloe stuff, and of course a lot of personal stuff. A lot of players are very open when you sit down with them. For anyone who loves the game, it’s a must-see.”

Fox Sports’ Sean Maloney will host the show, which Delany described as bringing a “very different angle” to the tournament. “To make sure that we pick up all of those characters and that colour of London, Cup Runneth Over is a live audience show,” he said.

“Only a Fox/Sky partnership could achieve this. We’ve teamed up with our counterparts in New Zealand and South Africa. It’s all about access to the stars of the World Cup.

“During this period, we’ll have NRL360 at 6.30 followed by Matty Johns at 7.30 during the league finals, and then this show. It’s a fabulous three hours of television,” said Delany.

“It’s on Friday nights at 7.30, and will be live from London,” said Delany. Also hosted by Nick McArdle, the show has been revamped to look comprehensively at the teams and players in the tournament. uBets from the Best

Fox Sports’ expert commentary panel members each made a prediction as to which team they thought would come out on top of the 2015 Rugby World Cup.

John Eales: “Australia’s chances are very good, but we do need to focus on each game of the pool. If we can get through that, we have a very good chance of going into the finals. The team to beat for us is England, then it’s the All Blacks.”

Tim Horan: “The All Blacks. I think the Wallabies will make the semis. I’m really confident about them beating Wales and then hopefully England at Twickenham too. They should have some really good momentum going in.

George Gregan: “All Blacks are the team to beat. What they’ve done since since 2011 is win 90% of their games. The Wallabies will be dangerous too. If they can get into the quarter finals then they’re away. I’m a believer – I’m even a believer in the Australian cricket team!”

Rod Kafer: “I’d love to find some really big blokes. I’m concerned by our scrum. I think we can hold on, but it’s all about injuries – especially in the front row.”