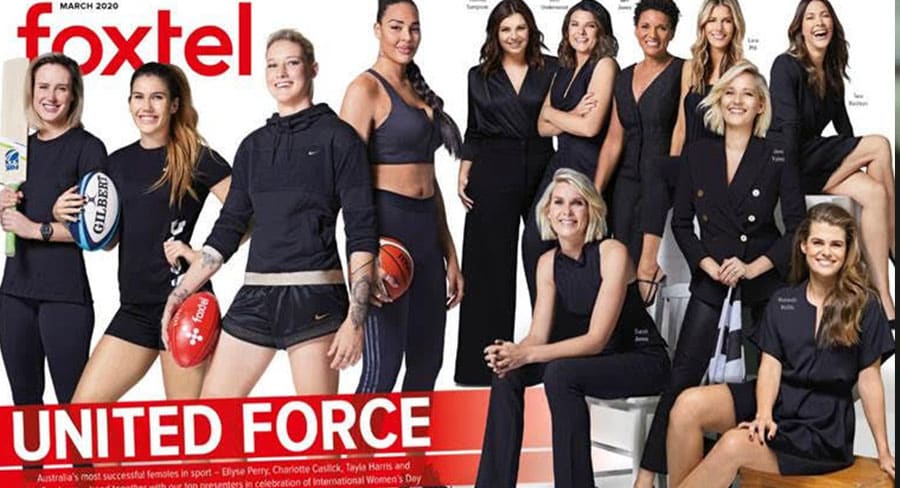 Call My Name, a six part interview series with some of Australia’s biggest female athletes, will have its world premiere on Monday March 2 at 8pm on the special pop-up channel FOXW, headlining a week-long showcase of women’s sports programming to mark International Women’s Day.

The interviews were conducted by Fox Sports female presenters, including Yvonne Sampson, Tara Ruston, Mel Jones, Kelli Underwood, Sarah Jones and Hannah Hollis with each episode dedicated to a particular athlete talking about their trail blazing career and their positive impact on the growth and popularity of women’s sport in Australia.

Call My Name will hero a week-long schedule of women’s sports programming on FOXW (Channel 507) from Monday, March 2 to Sunday, March 8 which will focus a spotlight on women’s sports, showing and celebrating the skill, excitement, courage and tenacity of our female athletes and how #herostartswithher.

FOXW will simulcast Fox Cricket’s broadcasts of the semi-finals and Final of the ICC T20 World Cup 2020 on Thursday, March 5 and Sunday, March 8 as well as game 2 of the WNBL Grand Final Series, six games of round 5 of AFLW and game 1 of the Hockeyroos in their series against Argentina.

The channel will also include a special women’s edition of The Back Page on Tuesday, March 3 at 6pm, which will be hosted by Tony Squires alongside Kelli Underwood, Australian netball captain Caitlin Bassett, Fox Cricket commentator Mel Jones, broadcaster Adam Spencer and special guest, Opals star Liz Cambage.

The first three episodes of Call My Name will air on Monday, March 2 from 8pm. Episode one will feature dual international footballer and cricketer Ellyse Perry, a key member of the Australian team hoping to win the ICC Women’s T20 World Cup on soil when the final is played on International Women’s Day.

Ellyse Perry’s on field performance demands our attention. The energy this record breaking, dual athlete puts into training is key to the results. She constantly works on improving, a trait she developed at the nets with her father. This strong base has fostered the rise of one of Australia’s most celebrated athletes – male or female.

Is there a name more recognizable in Women’s Football than superstar, Sam Kerr? The Western Australian, juggles her commitments as Matilda’s Captain striving for Gold in Tokyo and as newly signed striker for English powerhouse Chelsea in the Super League.

In Federation Square, there’s a statue of Tayla Harris celebrating a turning point in the representation of our female athletes. Dual athlete Tayla Harris (AFLW & Boxing) has embraced the recent increased support of women’s sport, and become by default a spokesperson for women who just want to compete on an equal playing field.

Mental toughness – for a golfer this could be one of the most valued attributes and Hannah Green has it in spades. Watch this and you’ll understand how in just her 2nd LPGA season, the Western Australian won a major championship and backed that up with a further tour win, before completing 2019 as the recipient of the prestigious Greg Norman medal.

If you’re looking for a warrior who embodies resilience through adversity then Tiana Penitani is that warrior… overcoming childhood tragedy and relentless injuries early in her career, Penitani has risen to the challenge and continues to make her mark on the rugby field.

Authentic – is the best way to describe, all 6 foot 8 inches of Liz Cambage, the often-divisive athlete who does it her way: as an Olympian, breaking records in the WNBA and posing nude for ESPN’s annual body Issue.

All Episodes of CALL MY NAME will also be available on demand and can be streamed on Foxtel Now and Foxtel Go.

The FOXW (Channel 507) will be available from 12.01am on Monday, March 2 and will run through to midnight on Sunday, March 8 to all Foxtel sports subscribers.