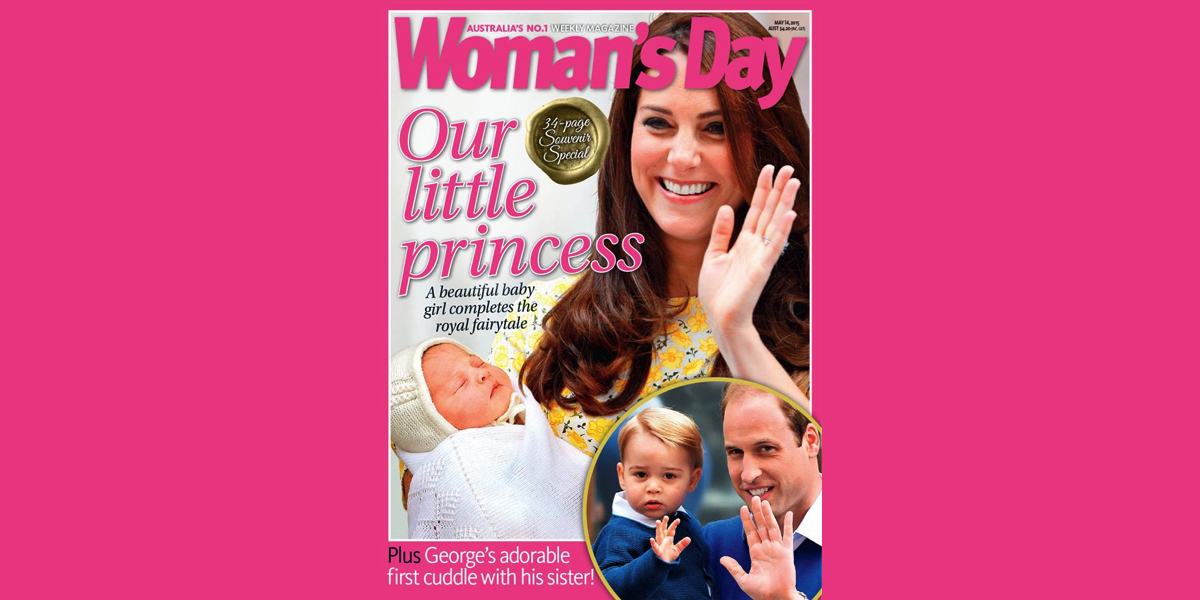 Woman’s Day dedicates a special issue for the Royal Baby

Although Woman’s Day normally comes out on a Monday, the birth of Princess Charlotte was enough for the title to squeeze an extra edition into the week – must be a hard-working team! The 84-page Royal Baby section has a number of great pics, including a sleeping Charlotte, Princes William and Harry in their army days and as children and very 90’s snaps of Princess Diana.

Karleigh Smith’s coverage of the baby goes over 10 pages – impressive! – and mentions how long it took Kate to give birth, her belief she would have a daughter because of her cravings for watermelon and Prince George’s reaction. Kate’s post-birth wardrobe, Prince Harry’s whereabouts and the decorative theme of her nursery are also examined closely. George himself then gets three pages, which are followed by a look back at royal history. The brotherly bond between William and Harry gets two pages, while the life of a young Queen Elizabeth is examined and interspersed with the lives of today’s young royals over five pages. The royal family tree and of course Princess Diana are then examined, with Royal Correspondent Gavin Grey’s three pages on Diana particularly nostalgic.

Outside of the Royals, Bauer’s challenger website Food To Love is plugged in a 15-page section of the same name featuring potato gnocchi, fish tagine and pork neck all based on the principles of eating in season. With winter well and truly on it’s way, two pages are devoted to apples, while four diverse breakfasts are also showcased. Continuing the Royal theme, food director Jenenne Plummer makes a pink cake titled “Fit for a Princess”.

Camel and denim are the order of the day across two pages of fashion, while Emma Markezic takes readers to Venice across two sun-soaked, colourful pages. Celebrity medium Mitchell Coombes also gets two pages, with an insert from Jenny Blume predicting Princess Charlotte’s life based on her horoscope. The always fun What the Frock section has a Logies special, where Dannii Minogue, Jen Hawkins and Chrissie Swan scoring highest of the black dresses. Of the more colourful dresses, Home and Away’s Ada Nicodemou scored the highest for her Paolo Sebastian dress, while House Rules’ Joh Griggs failed to impress. Carrie Bickmore and Asher Keddie were also singled out because of their slim, post-birth figues.