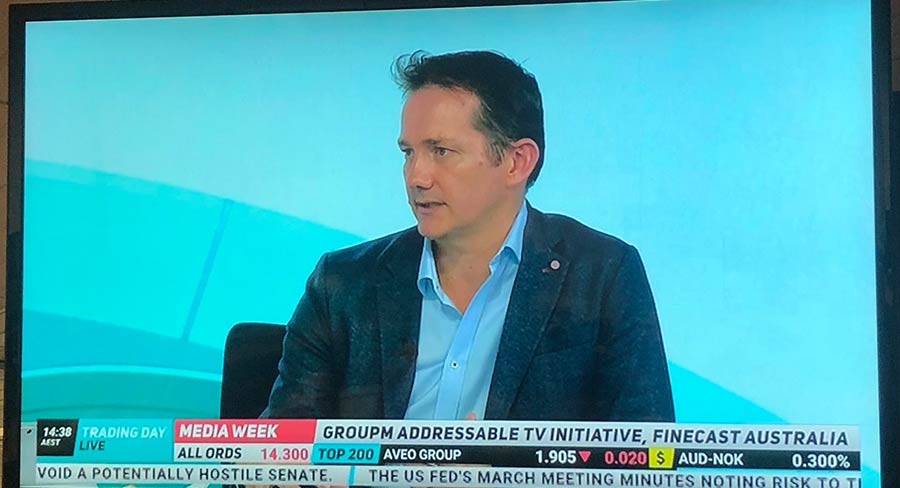 Finecast has partnered with broadcasters Seven, Nine, 10, SBS and Foxtel via MCN. To explain exactly what Addressable TV is how it works, Finecast managing director Brett Poole was a guest on Mediaweek’s weekly Your Money segment and spoke with James Manning, Ingrid Willinge and James Daggar-Nickson.

Here are some highlights from the interview.

What is addressable TV?

This is where advertisers can deliver different messages to different homes, unlike what you can do with broadcast TV where everybody sees the same ad at the same time.

It is a huge advance in TV advertising, which in the past has been used for reach. Now you can start segmenting audiences.

What makes it possible?

One of the changes in recent years has been the adoption of smart TVs, which enable broadcasters to get data. That allows information about who is watching that TV and broadcasters have invested a lot of money to develop catch-up apps, or OTT apps, which allows advertisers to have the data transfer when buying television. When a viewer is logged into their favourite app we know where that viewer and they can smartly deliver an ad.

Can you do it while watching live TV?

How big is the opportunity for advertisers?

It is not as big as broadcast TV, which is still the biggest and the best for reach buys. OzTAM though has measured as many as 12m different devices being connected in a month, which is also a big reach opportunity.

People say that TV is in decline, it is only the measurement that is in decline, TV has never been better than it is today. It is just not measured in the same way as people choose when they watch.

What are the ramifications for the cost for advertisers – will it cost more.

The base price for addressable TV will cost more because it is more targeted. But when you work out the efficiency of the buy it is always better than broad reach campaigns.

Will advertisers spend less to reach audiences, or more because it works better than reach?

I have never met a marketer who didn’t spend more when something worked. Because it works it will get more spend diverted to it on media plans.

Are we seeing changes in the way adspend is allocated?

Because we have been planning TV the same for decades it is now a challenge because every part of the delivery has changed – from planning to how we activate an ad to how interesting we make the creative to how we measure it.

How good are broadcasters with their data – are some better than others?

I love all broadcasters equally! They all have benefits and they all have a different strategy. They have all invested in the changing nature of TV and those experiences.

How big will on demand & live streaming become?

We are seeing way more programming being made available. Globally GroupM has forecast that up to half of all viewing could be addressable in some way.