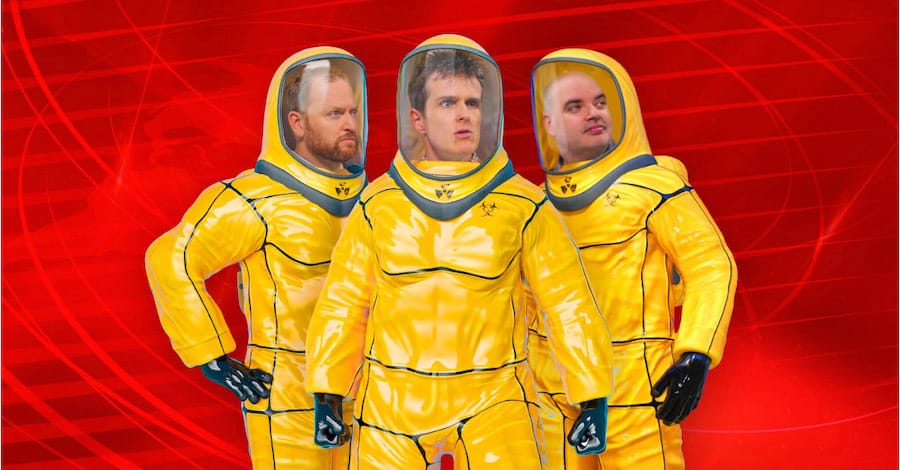 • The stunt was performed by newcomers Aleksa Vulovic and Alex Apollonov

The Chaser released a video this week taking the piss out of The Star Casino’s handling of Covid safety.

Proving again The Chaser should have its own regular TV show, the low-budget but hilarious prank has passed 600,000 views and is heading toward 1,000,000.

The stunt – performed by newcomers Aleksa Vulovic and Alex Apollonov – involves the Chaser comedians repeatedly attempting to get into The Star, while pretending to have Covid.

The duo tried their best to gain access to the Casino while looking like they should be turned away, from dressing in hospital gowns to giving themselves 48 degree fevers using a concealed heat-pack. Surprisingly they were still allowed entry to the casino. “My head was still really hot after I got inside,” said Alex. “I must have drunk 3 or 4 of their complimentary water bottles. They’re obviously very used to catering for sick customers.”

Aleksa reckons that The Star staff seemed more interested in how much he was prepared to lose at the Casino than his health: “When I rocked up with my hospital gown and drip, the first thing they asked me was whether I had a star casino gold membership card.”

The Star was fined $5000 in July for crowding too many people into its venue in breach of public safety rules. “One of the security guards had a missing button on his blazer. You could immediately see how much the casino has been suffering financially since they had to pay a whopping $5000 fine for their previous Covid offences,” said Aleksa.

Alex: “Next time we want to sneak drinks into the casino we’ll just put them in a hospital drip bag.”

The Chaser say they are not worried about retaliation from The Star. “There’s no point suing us, we already lost all our savings on big wheel during our filming breaks,” said Aleksa.

The shoot didn’t all go according to plan. “The cops arrived as we were preparing ourselves in the park, saying numerous bystanders had reported an escaped hospital patient,” said Aleksa.

The Chaser’s managing editor Charles Firth said: “The Star Casino doesn’t care about the well-being of its patrons under Covid. So it’s exactly the same as before Covid.”

There will be more revelations about the video shoot on the new Chaser Report podcast this week.