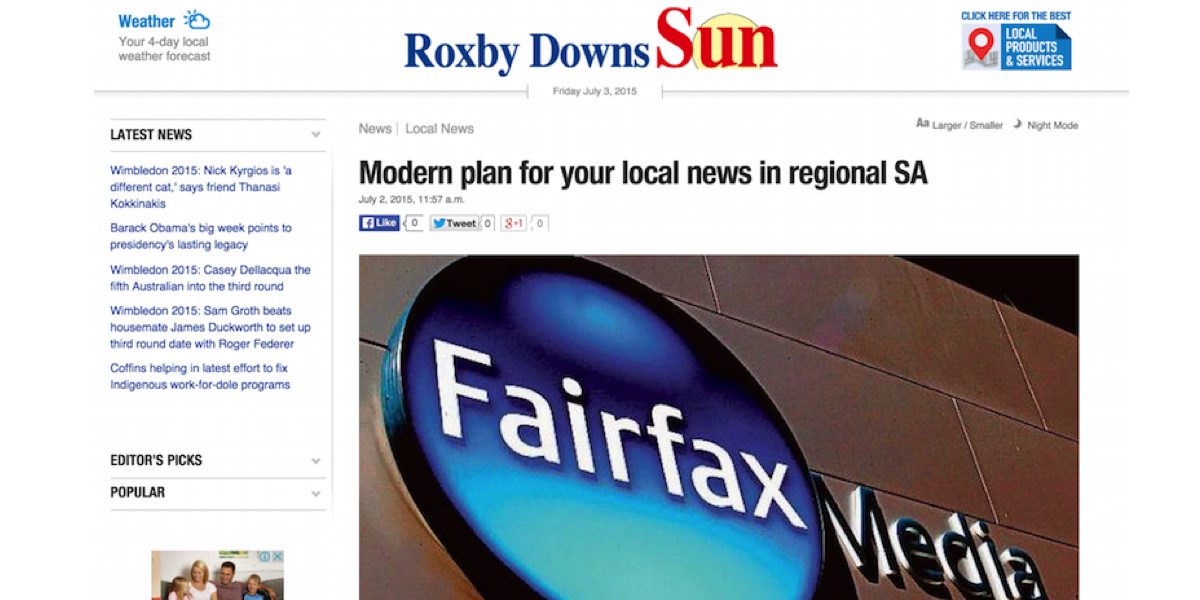 Fairfax Media yesterday revealed plans to restructure its regional operations in South Australia. The publisher noted the plan will involve revitalising its newspapers and websites, but the move will involve voluntary redundancies, perhaps as many as 35 across the state. Consultation with employees is now under way. Just over 20 of those roles will involve full-time editorial staff.

The proposal is part of an 18-month overhaul of Fairfax’s Australian Community Media (ACM) division.

Staff across South Australia were briefed on Thursday about the proposed changes at Stock Journal, Port Lincoln Times, Whyalla News, The Transcontinental at Port Augusta, The Times at Victor Harbor, Murray Valley Standard, Barossa and Light Herald, Northern Argus, The Recorder at Port Pirie, On the Coast, The Naracoorte Herald, The Islander, The Flinders News, Border Chronicle, Coastal Leader, Eyre Peninsula Tribune,  West Coast Sentinel and The Roxby Downs Sun.
Director of ACM John Angilley said the proposed changes followed a detailed assessment of the needs of the business.

“Our mastheads must embrace change to ensure they remain the most trusted source of news and information for years to come in the communities we serve,” Angilley said.

“We have developed a localised plan to sustain the important work we do across South Australia.”

Under the proposal, the Whyalla News will be published on Thursdays rather than twice a week and free weekly newspaper The Roxby Downs Sun will be discontinued.

Other proposed changes include closing the commercial printing business in Bordertown and relocating staff at some sites to new premises in their local areas.