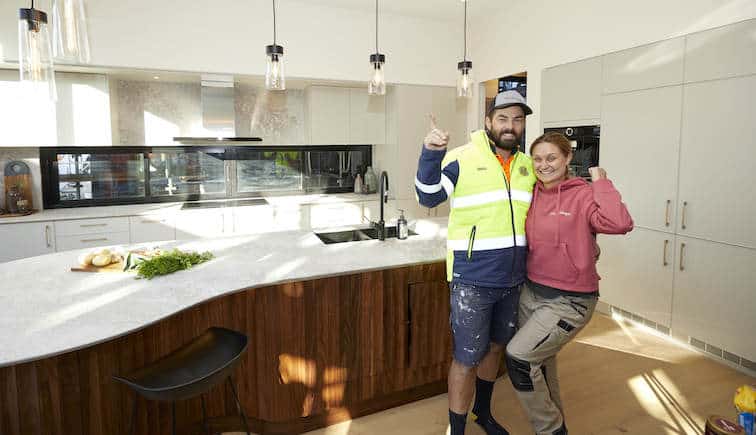 The Block shows off the best kitchens ever

Kitchen Week on The Block delivers Nine best Sunday in 20 weeks
As The Block hits 1m, Nine’s Sunday competition on just 400,000 or less

Seven: Cricket Australia and Seven seem to be on better terms as the season has started with some cracking women’s cricket over the past two weekends. The cricket organisation was the source of Seven’s primetime offering last night – a compile of the Amazon Prime series The Test. The two-hour special started at 7pm and had an audience of 346,000.

Crime Investigation Australia followed with an episode on Snowtown and the infamous bodies in the barrel case. It was gruesome viewing with 191,000 taking a peak.

Nine: “The best kitchens I have ever seen on The Block,” said Scott Cam at the start of the judging for Kitchen Week. Harry and Tash were judged first and Darren Palmer said it was almost perfect. There wasn’t a dud among them, but Jimmy and Tam did stand out, especially for their colour scheme and over $100,000 worth of Gaggenau goodies. “Today I am seeing kitchens I haven’t seen before, these kitchens are ahead of the curve,” said judge Neale Whitaker. But it was Daniel and Jade who managed to win after adding their bonus point they picked up during the week. On a night of little competition in the timeslot, The Block made it to 1.058m for the reveal with 981,000 watching the remainder of the episode.

60 Minutes was promoting Trump v Biden and the impact the President’s virus could have on the vote. The audience of 609,000 was up down from 699,000 last week.

It was downhill from there though with the return of The Graham Norton Show from its summer break on 202,000 despite the presence of an entertaining Dolly Parton.

The share should climb next week though with the launch of Junior MasterChef.

ABC: The final episode of The Murdoch Dynasty included a look at Roger Ailes and Fox News. Guests included Steve Bannon, the former head of Trump’s 2016 election campaign, who talked about how Trump admired Rupert Murdoch. The episode also looked at News Corp and Brexit and Murdoch’s influence. Former Sunday Times editor Andrew Neil said people listened to Murdoch in Canberra, London and Washington, not so much in Brussels. Former Sun editor David Yelland said however Brexit was Murdoch’s finest hour. “Without Rupert there would have been no Brexit,” said Yelland. The audience of 428,000 followed 548,000 and 433,000 for the first two episodes.

Episode three of the new season of Grantchester was then on 440,000.