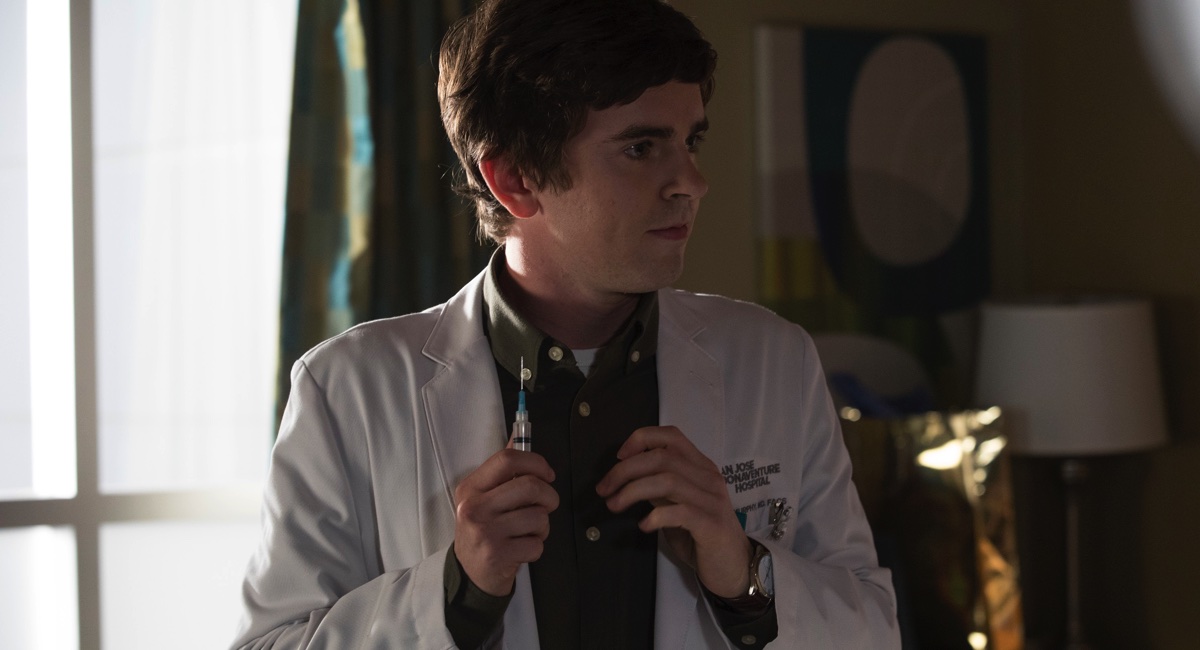 • Seven’s Melbourne Cup coverage sets new record for streaming
• Seven #1 Tuesday as The Good Doctor and Instant Hotel both win
• The first episode of The Good Doctor climbs 26% to 1.33m with timeshifting 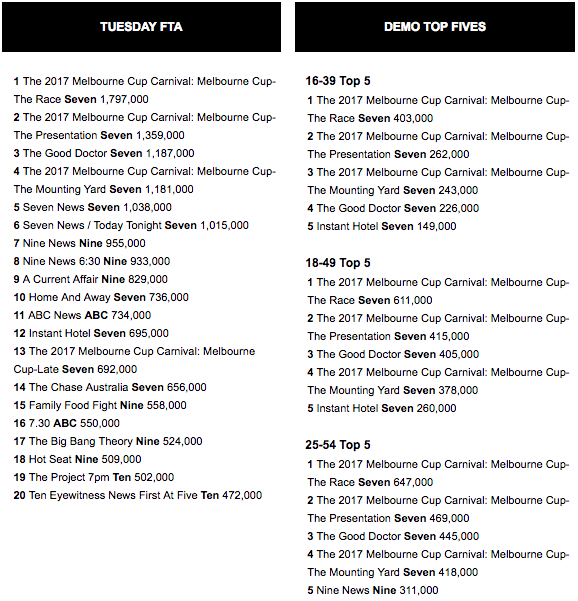 The network’s primary channel primetime share was again close to 25% for a second consecutive week.

Before we get to what happened in the evening, Seven was the only place to be during Tuesday afternoon with its coverage of the Melbourne Cup and supporting races. At 3pm in Sydney Seven had an audience of 381,000 with TEN its closest competitor where 24,000 were watching Judge Judy. In Melbourne at 3pm, Seven had an audience of 840,000 while Nine News was back in second spot with 28,000.

The Melbourne Cup day averaged 915,000 metro viewers across seven hours of broadcast and peaked at 2.7 million during The Race (1.9 million metro).

The first episode of Instant Hotel was a timeslot winner with just under 700,000 tuning in. The format looks like MKR meets Airbnb, but without cooking skills.

The Good Doctor has turned into a powerhouse performer for the channel just when it needed it most. After audiences of 1.06m on Tuesday and then 950,000 on Thursday last week, episode three has stormed the ratings with 1.18m, which is off the chart for a US drama. Seven was originally planning to launch The Secret Daughter’s second season last night, but that now moves to Wednesday.

Meanwhile Consolidated 7 timeshift numbers for the first episode of The Good Doctor show the metro audience climbing 26% to 1.33m. That is the second-biggest timeshift audience ever, and the biggest for Seven. 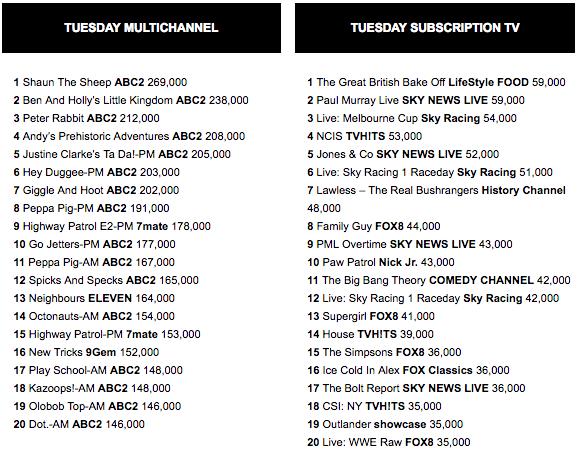 Leila McKinnon stepped in as A Current Affair’s Cup Day host and she got to intro one of the year’s viewing highlights for the program – Martin King‘s day with the punters at Flemington. King didn’t disappoint with a varied collection of winners and losers both drunk and sober. There seemed to be more microphone grabbers this year, many who thought they could do a better job than King. (They couldn’t.) The editors didn’t disappoint either with an accompanying soundtrack to King’s interviews that started with Game Of Thrones music and included Slade. The Cup Day episode did 829,000 after 746,000 on Monday.

Family Food Fight then managed to climb back above half a million with 558,000.

The Big Bang Theory stayed in that ballpark too with 524,000.

The Project had its own reporter at the Cup, former Fox FM breakfast host Dave Thornton. Meanwhile Thornton’s former Fox breakfast co-host Fifi Box was on the Tuesday panel. The episode did 502,000 at 7pm.

No record numbers here after a big Monday.

However, the best after 8pm was Screen Time on 334,000 followed by the new Keeping Australia Safe on 331,000. The scope of the latter is massive and it deserves a better audience than it had last night. The ITV Studios series covers 24 government and private institutions that granted privileged access for cameras to record their operations over the same 48-hour period. The entire six-part series was shot in two days.

The final episode of this season of Great American Railroad Journeys saw host Michael Portillo visiting Graceland. The episode did 327,000 and it could yet again be the channel’s most-watched program this week.