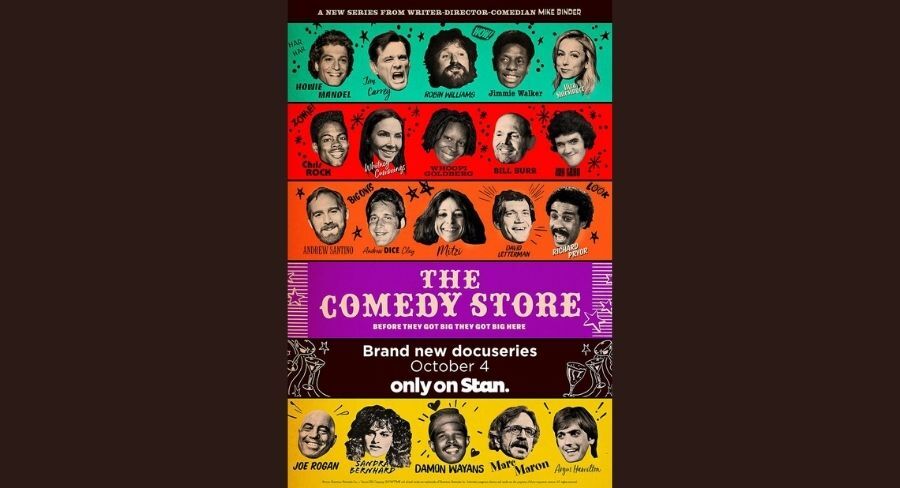 The five-part series chronicles the evolution of comedy from the L.A. club

Stan has today released the official trailer for the brand new docuseries The Comedy Store, a five-part series chronicling the evolution of comedy from within the walls of the L.A. comedy club. It is directed and executive produced by Mike Binder (The Upside of Anger, Reign Over Me), who started at the Store as a doorman before rising to main stage performer, and executive produced by Oscar nominee and Emmy winner Mike Tollin (The Last Dance). The series premieres on Sunday, 4 October on Stan.

The Comedy Store brings to life the history created at the club on the Sunset Strip. The series weaves never-seen-before footage of comedians such as Richard Pryor, Sam Kinison and Freddie Prinze together with interviews with David Letterman, Jay Leno, Chris Rock, Andrew Dice Clay, Joe Rogen, Whitney Cummings, Jimmy Walker, Michael Keaton, Jim Carrey, Whoopi Goldberg, Marc Maron, Damon Wayans, Bill Burr, Byron Allen and many more as they reflect on the ups and downs of The Store’s history.

As a Comedy Store alum, former stand-up comic Binder spotlights a part of pop culture that forever changed comedy and, for many, provided a launching pad to stardom in film and television. Legions of well-known performers practised stand-up at The Store on Sunset while being mentored by Mitzi Shore. Loved by most, hated by some, but always garnering their respect, Binder says Shore “…changed the way comedy was presented. The Store is her legacy. It’s the epicentre of stand-up comedy in the world.”

The Comedy Store premieres on Sunday 4 October, only on Stan and same day as U.S.