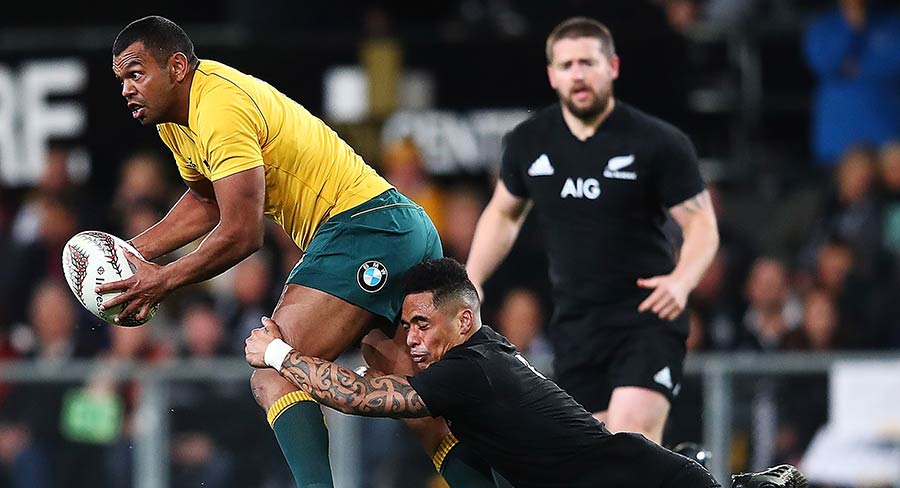 • Every match will be live on Fox Sports

The 2019 Rugby World Cup starts tonight with host nation Japan taking on Russia at 8.45pm, ahead of the Wallabies first match against Fiji tomorrow at 2.45pm on Fox Sports. Every match of the Rugby World Cup will be live and on two dedicated channels – Fox Sports 503 and RWC 4K Ultra HD – from the Opening Ceremony on Friday through to the Final on November 2.

Joining them will be world rugby journalist and former England International Stuart Barnes, to provide expert insight into the northern hemisphere’s best ahead of Sunday’s fixtures between Ireland vs Scotland, England vs Tonga and Italy vs Namibia.

Wallabies vs Fiji, 2.45pm: “For the Wallabies it is very important to start this World Cup well to build confidence and their first up opposition, Fiji, are a very dangerous side if they are given chances. The Wallabies need to be executing all of their set pieces with a traditional game that won’t allow Fiji to have a lot of opportunities for unstructured play – which they are very good at. They have two devastating wingers in Semi Radradra and Josua Tuisova that will be need to be contained well.

France vs Argentina, 5.15pm: “Argentina were disappointing in the Rugby Championship after what was quite a successful Super Rugby campaign for the Jaguares, who form the bulk of their national squad. Argentina usually play well in World Cup’s and have the potential to upset more fancied nations in Japan, a lot of the Argentinian players cut their teeth in the French national competition so they will have some good reference points for their opposition.

“France have made three World Cup Finals and never won, you just never know what you’re going to get from them and they have some really good young players with Antoine Dupont a developing world rugby star at halfback. The French have a dangerous back three and good kicking game who will chance their arm if they are given a sniff.”

South Africa vs New Zealand, 7.45pm: “South Africa are the best team in the southern hemisphere at the moment and the All Blacks will be wary of that, especially after the 16-all draw in New Zealand during the Rugby Championship.”

“The All Blacks under coach Steve Hansen are a team that learns very quickly from poor performances and will bring their best for this one. South Africa have had success against the All Blacks by not kicking the ball away too much and maintaining possession to make them tackle a lot, which ultimately tires them out – I believe this is their blueprint to success.”

FOX SPORTS dedicated RWC channel switched on overnight (channel 503) while Foxtel’s RWC 4K Ultra HD Channel (Channel 499) will commence tomorrow, September 20 at 6.00am forming the go-to destination for fans through to the Final on November 2. 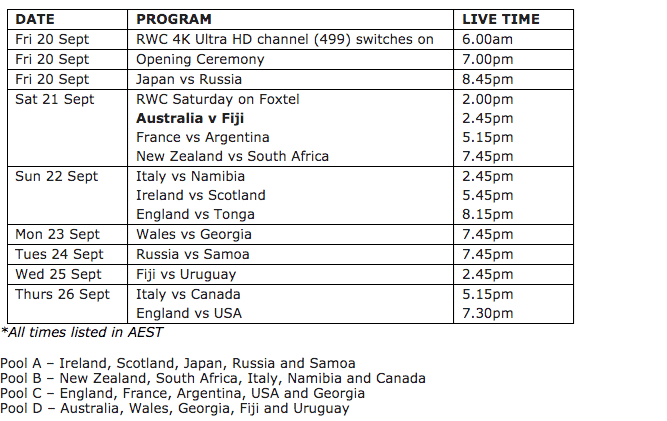