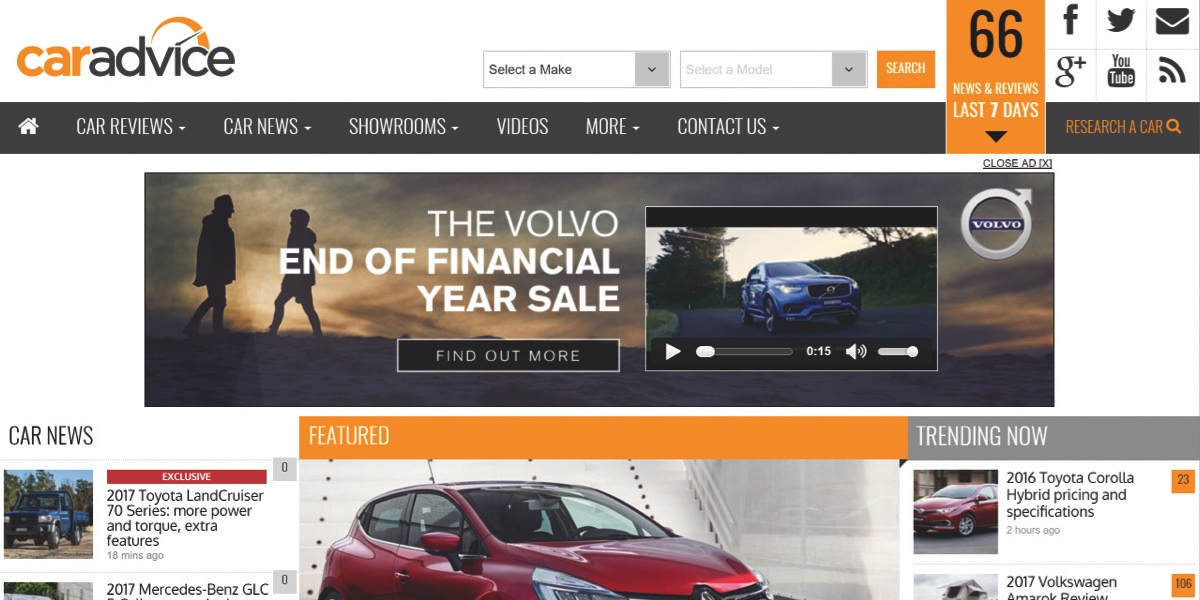 While the automotive media space is one of the most competitive verticals, CarAdvice is carving out its niche with a unique proposition – content.

“The difference between CarAdvice and our competitors is we’re the only site in the top ten, according to Nielsen, that focuses purely on content as opposed to classifieds. CarAdvice is the only player that pays journalists to write content and we drive our audience purely out of editorial and video,” explained CarAdvice chief Andrew Beecher.

CarAdvice has spent the past two years investing heavily in content to meet the seemingly insatiable appetite for motoring related content.

“If you look at the total number of uniques hitting all of the car sites each month, it is about a quarter of the internet population. And yet we’re only buying about 90,000 new cars a month. So cars, for Australians, are right up there with watching sport and buying property,” Beecher advised.

To deal with the demand in content, CarAdvice has a team of 18 creators across the country working full-time in offices in Melbourne, Sydney, and Perth, along with a reporter stationed in Brisbane. Eleven of the content creation team are journalists, with a further seven staff producing video content. Altogether, CarAdvice employs 36 people nationally.

Readers coming to the site are largely looking for information prior to making a car buying decision. The audience can’t buy a car through the site, like the rest of CarAdvice’s competition, but Beecher is insistent that the site wields considerable influence over purchasing decisions. Which isn’t to say that the site only focuses on the cars its readership might be looking to buy. CarAdvice also offers aspirational content, such as sports cars and luxury vehicles.

“We benchmark our content on two things,” Beecher explained, “the cars that are sold in Australia and content that resonates with our listeners. So, no surprise we over-skew in sports cars because sports cars tend to attract a particular type of readership. Apart from that, we benchmark pretty well with the rest of the industry with the cars that are sold. So, light commercial vehicles for example, dual cab utes, SUVs, and cars like the Tesla which we probably over-represent on compared to the few that they sell in Australia. The reason we over-represent on them is because we think they are the future of motoring.”

The changing face of car ownership is a focus for CarAdvice, with attitudinal changes impacting on its readership.

“Gen Ys are a disaster when it comes to cars as they are way more into public transport. But millennials are loving cars again. If you think about it, it’s because cars are one of the last true brand experiences that we have apart from fashion. When you are buying a new car, you are making a decision about your personal brand and that is a big part of what we do. We make sure we review cars with a whole variety of opinions about cars,” Beecher said.

Ride sharing platforms like Uber are also an area of focus for CarAdvice.

As with most digital media companies over the past 12 months, video has become an increasingly bigger part of the CarAdvice business. While readers over the age of 40 are still opting for text articles, the CarAdvice team has found that its under-40 audience has a strong predilection toward video.

“Since we’ve invested heavily in video, our audience has grown by a thousand percent. We’re now the most subscribed car video channel in Australia, so even though we’re maybe one- third of CarSales total unique traffic, we’re twice the number of its YouTube subscribers.

“And the beautiful thing about video is that it converts extremely well to mobile. Automotive is highly consumed by mobile devices and video tends to lend itself very well to that consumption,” reported Beecher.

The video content isn’t restricted just to video on the site, with video content being repurposed across other platforms like Facebook. Video has become so integral to the business operations that CarAdvice is currently migrating all of its video to Brightcove.

All of CarAdvice’s video production is handled internally, with all material shot to high definition broadcast standards. This enables the company to be nimble when it comes to delivering video content across a number of different platforms, each with their own format requirements.

In addition, CarAdvice also syndicates its content to other distributors, such as Microsoft and Seven West Media.

This month CarAdvice launched a weekly radio show on the Macquarie Radio network through the Nights with Steve Price program across Australia on 2GB Sydney, 3AW Melbourne, 4BC Brisbane, and a number of regional stations. This is in addition to CarAdvice’s own regular podcast.

“Our podcast is designed predominantly for CarAdvice loyalists, whereas the 3AW show is done in conjunction with 3AW production. It uses their host and our talent, whereas our podcast is only our own talent. Our business strategy is absolutely to be a multi-channel publisher and we do both. There’s different uptake. There will be a podcast of the Macquarie show for their listeners and there will probably be some crossover because the content will be different as well,” Beecher said.