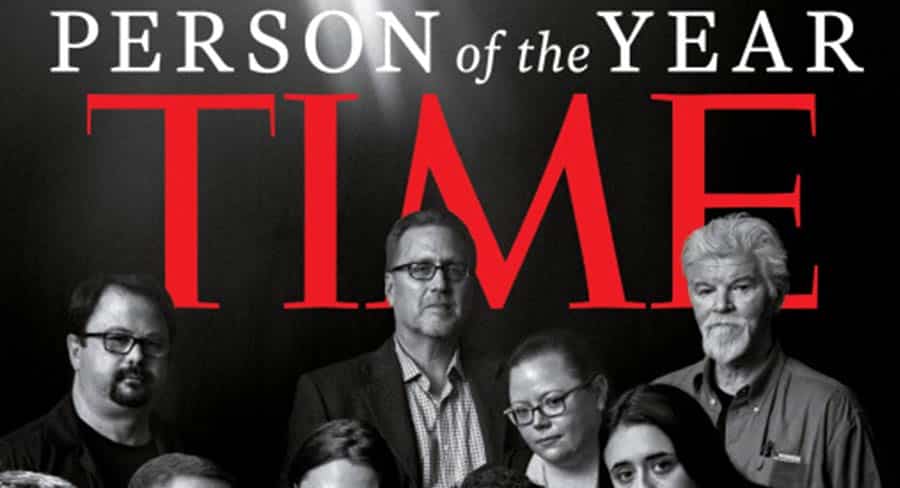 • This year we are recognising four journalists and one news organisation

Time magazine has announced its Person of the Year award and revealed the special magazine covers featuring them:

This year we are recognising four journalists and one news organisation who have paid a terrible price to seize the challenge of this moment: Jamal Khashoggi, Maria Ressa, Wa Lone and Kyaw Soe Oo and the Capital Gazette newspaper of Annapolis, Md. They are representative of a broader fight by countless others around the world – as of Dec. 10, at least 52 journalists have been murdered in 2018 – who risk all to tell the story of our time.

On the outskirts of Yangon, Myanmar’s largest city, two young reporters sit in a prison said to be “the darkest hellhole in Burma.” Millennials, we would call them in America—Wa Lone is 32 years old; Kyaw Soe Oo is 28. The genesis of their arrest, one year ago on Dec. 12, is their reporting for the Reuters news service that later exposed a mass execution of 10 Rohingya Muslims, part of a violent campaign against the minority group by Myanmar’s military. “I never expected he would be arrested,” says Kyaw Soe Oo’s wife Chit Su Win. “I was more concerned about him getting shot.” It has long been the first move in the authoritarian playbook: controlling the flow of information and debate that is freedom’s lifeblood. And in 2018, the playbook worked. Today, democracy around the world faces its biggest crisis in decades, its foundations undermined by invective from on high and toxins from below, by new technologies that power ancient impulses, by a poisonous cocktail of strongmen and weakening institutions. From Russia to Riyadh to Silicon Valley, manipulation and abuse of truth is the common thread in so many of this year’s major headlines, an insidious and growing threat to freedom. As Facebook faced an overdue reckoning on how to control the driverless car of social media, hazards to traditional sources of information continued to mount. On Nov. 28, owners of more than 400 media outlets in Hungary “donated” control to a pro-government conglomerate created by allies of its nativist Prime Minister. This spring, two journalists in India, the world’s largest democracy, were killed in separate, deliberate hit-and-run attacks in the span of 24 hours. In June, a subject of a local newspaper’s coverage was accused of having marched into its Maryland newsroom and killing five staffers. This fall, CNN has twice had to evacuate its New York offices because of bomb threats. In its highest forms, influence – the measure that has for nine decades been the focus of Time’s Person of the Year – derives from courage. Like all human gifts, courage comes to us at varying levels and at varying moments.