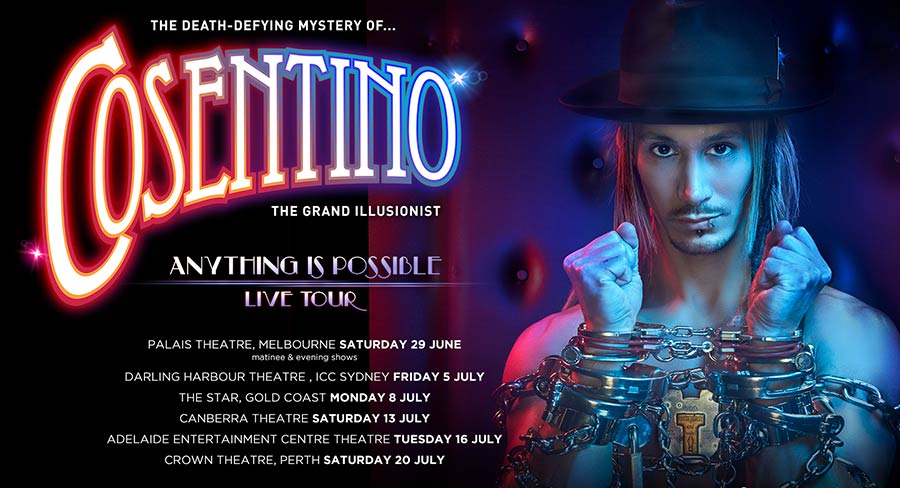 • Each piece in our show takes a minimum of three months to put together.

Before his new Australian tour mid-year, Cosentino has been busy in rehearsals. He reminded Mediaweek during an interview it has actually been three years since he did a live touring show in Australia.

The reason for his absence from concert arenas is two-fold. Firstly it takes a long time to develop a new show full of new elements. Secondly he’s built a sizeable fanbase across Asia and has been touring and making TV shows for that market too.

The most recent live shows in Asia have included stops in Vietnam, Indonesia and Singapore.

Before his mid-year Live Nation tour, Cosentino is doing a busy yet short season at Dreamworld across the Easter holiday period where he is doing 33 30-minute shows, two shows a day. “It is completely different to the live tour,” he told Mediaweek. As to creating content for his major new Anything Is Possible tour, Cosentino said: “It takes a long time to come up with new material. Each piece in our show takes a minimum of three months to put together. It is a lot of work to put a 90-minute show together.”

In each half of his new show, Cosentino has six new pieces. “To do that I need to develop an idea, sketch it up, then fabricate it [build it]. Then you try it out and modify what doesn’t work and start again. That is just the mechanics. Then you have to think about the presentation, what is the story we can build around each piece. Then you think about the kind of music to accompany it and then what sort of lighting and costuming works.

So where does an illusionist practice all that? “We have a purpose built facility where we have a stage that is 15 by 11 metres with proper lighting, curtains and sound equipment.

“We replicate the whole show as how we present it in front of audiences.”

Cosentino films the rehearsed pieces to watch back and then work on any improvements. “The show consists of illusions, close up magic and escapes plus interaction with the audiences.”

As to judging what his audiences want to see and then measuring reaction once he is on tour, Cosentino said that can be tough.

“After doing this for so many years and in so many countries, including many where they don’t speak English, I have a feel for what works and what engages audiences.

“But you genuinely don’t really know until you put it out there. As a magician you need to be a very good listener and hear whether the audience is responding the way you want them to. If it is a death defying escape, are they gasping? If they are not then you need to rethink it.” The climatic piece of the show is a death defying escape. “It is the most dramatic of the pieces and requires the most setup. I have to explain we are using real locks and real chains and a real saw that is connected to three wires, which hold a big buzz saw in place. I am strapped to it in a vertical position and each time a grinder goes through a wire it snaps and brings the buzz saw closer and closer to me.” Sounds dangerous!

The biggest shock he dropped on us: “The magician is really an actor who is playing the part of a magician. [He whispers] Secret revealed…I am not really magical. I pretend I am magical.”

Cosentino said the process for escaping from each lock is very methodical – about 10 to 12 seconds per lock. “It is always timed to perfection. With this particular new piece, which doesn’t even have a name yet, we are still figuring out how it will play out. We have to build in some drama, I don’t want to get out too soon. I need to know how far to push it.

“I know when I did my TV show I pushed it too far, mistimed it and got hit by a knife.” The children’s book deal Cosentino has with Scholastic looks set to spawn an animated TV series. “It’s taking some time because the funding cannot be done solely within Australia. We have already been to Nine and they have liked it and agreed. We need international funding which makes it a more difficult project. We have spent a lot of time speaking with animation houses and there is only a certain amount they will put in.”

Cosentino is also in talks with Sony Pictures Television International to produce what will be a second series of The Elements for Asia to feature the Aussie illusionist. “We need to fit that in around my touring schedule.”

China is one of the markets on the drawing board for Cosentino. “We now have representation there and we are sending in our products and also looking at doing live shows.” He explained there can be restrictions around what can and can’t be shown onscreen. “We managed to be the first foreign magician to be played on TV in China in 10 years. It can be a long process to achieve that. Hopefully the time and effort we are putting into it pays off.”

A show in Las Vegas is not high on his wish list. “There are some really great acts and there are also some really terrible acts. When I was there last time I felt like anyone could get a gig in Vegas as long as you could fund it yourself. It is almost like a race to the bottom.”

Performing in Macau is a much more enticing proposition.

“That feels like a growing market to me. We played Wynn Casino [in Macau], and it draws more gambling revenue than the entire Las Vegas strip.”