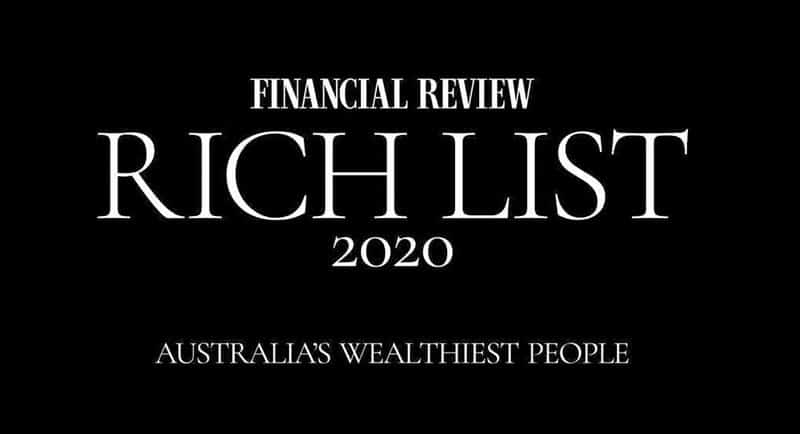 • The average age of Rich Listers is 66-years-old

Rinehart tops the 2020 Rich List, which has seen Australia’s 200 richest increase their collective wealth by 24%, to $424 billion. Australia now has a record 104 billionaires, and the cut-off to make the Rich List sits at an all-time high of $540 million.

Iron ore miners are the big winners, seeing 12 Rich Listers with direct exposure to Western Australia’s mines more than double their wealth to nearly $80 billion collectively. As Chinese demand for iron ore surges on the back of infrastructure projects, the explosion of wealth has given rise to the ‘ore-ligarch’.

Andrew Forrest – Australia’s No.2 Rich Lister – was at one stage adding $500 million per week to his fortune, seeing his wealth go from $7.99 billion last year to $23 billion this year.

2020 has been an unprecedented year with unforeseen changes, and this year’s Financial Review Rich List, which has been published since 1983, is a fascinating insight into which industries have suffered through the worst economic downturn since the 1930s, and those that have flourished.

The acceleration towards e-commerce due to COVID-19 has helped e-tailers such as Ruslan Kogan (who re-enters the Rich List with a net wealth of $575 million), as well as Gerry Harvey (up 35%, now worth $2.57 billion), one of the few bricks and mortar retailers to benefit. The stockmarket frenzy for buy now, pay later businesses like Afterpay has resulted in co-founder Nick Molnar becoming Australia’s youngest billionaire ranked 50th on the list (up 283%, now worth $1.86 billion). His competitor Zip also saw an impressive windfall with its co-founder Larry Diamond debuting on the Rich List with an estimated fortune of $552 million. As we all take up a new working and shopping from home culture, the need for essential technology has benefited e-commerce and tech companies – such as BigCommerce and Atlassian.

With international travel off the cards, luxury car dealer Nick Politis (up 6.75%, now worth $1.31 billion) benefited from a switch to cars with a surge in June sales. And with most of Australia now declared drought-free and cattle prices booming, the top end of the agricultural sector is performing strongly with beef baron Trevor Lee and Manildra Group’s Dick Honan becoming billionaires.

For travel, entertainment, education and hospitality, however, 2020 is an annus horribilis.

It’s a year Flight Centre owners Graham Turner, Bill James and Geoff Harris would prefer to forget with the trio not making the Rich List for the first time since the 1990s. Nepalese-born couple Shesh Ghale and Jamuna Gurung, whose tertiary education and commercial property empire spans the sectors hardest hit by COVID-19, are no longer billionaires. Meanwhile, Alan Rydge, whose Event Hospitality and Entertainment business operates Rydges, QT and Atura hotel chains, Event Cinemas and Thredbo Alpine Resort, has seen his wealth reduce by $1.3 billion.

Some entrepreneurs fell off the list after previous big valuations for their business, driven by venture capital, were not borne out when it came time to exit. These included Patrick Grove (Netflix competitor iflix) and Tim Kentley-Klay (driverless car hopeful Zoox, which sold to Amazon for $1.5 billion this year after being valued at more than $4 billion).

“Some of the blue sky has started to come out of the tech scale-up scene, which could be a harbinger for other sectors as cheap money dries up,” said Rich List co-editor Michael Bailey.

“It’s been one of the most turbulent years the Rich List team have ever encountered. At the start of the pandemic many of the fortunes of the nation’s wealthiest were crumbling, but they have proven to be exceptional business builders. They have taken advantage of shifting demands within the economy, driving overall wealth to new highs,” Rich List co-editor Julie-anne Sprague said.

The Financial Review Rich List is available on www.afr.com and a special Rich List edition of AFR Magazine, featuring profiles of our richest people and analysis of the trends that are making them even richer, is available nationally on Friday October 30. Tasmania has its first billionaire in 2020, with mining services magnate Dale Elphinstone increasing his wealth from $814 million to $1.08 billion.

The average age of Rich Listers is 66-years-old