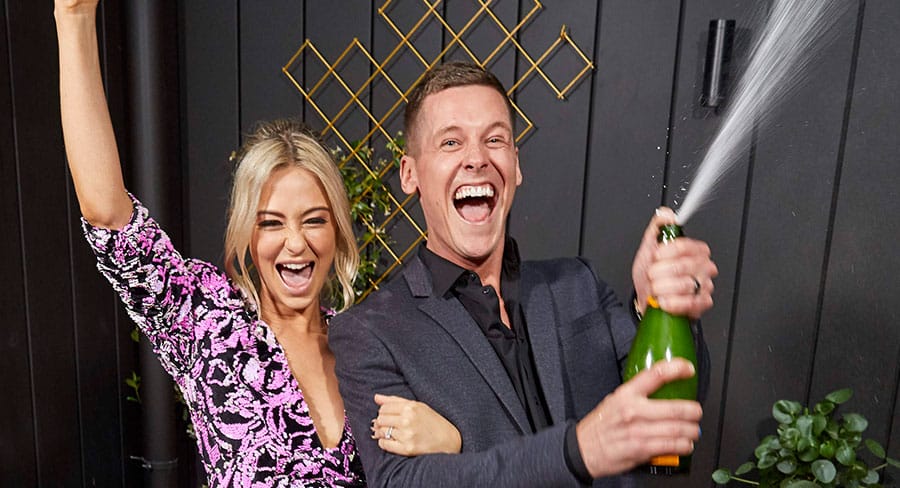 • Tess and her husband, Luke stunned the bookmakers by making the most money

The biggest Block ever reached a stunning conclusion tonight, celebrating a 100% clearance rate with all five houses selling in a night of incredible auctions. Cairns couple Tess & Luke took home the grand prize and were crowned the winners of The Block 2019.

After 14 gruelling weeks of renovation there was joy and relief for all couples, with each auction soaring above reserve and securing profits for all the Blockheads, who walked away with a massive total of $2.392 million between them – a fitting end to the series that saw the couples renovate grand old homes in Victoria’s goldrush.

In a Block first the reserves were set at $2.990 million for each of the five three-storey terraces. Experienced renovators, Mitch & Mark went first and started the day off well. The hammer came down on their house at $3.374 million, which was $384,000 over their reserve. Newlyweds Tess & Luke had passionate buyers in the room and managed to secure a whopping $3.620 million, an eyewatering $630,000 over reserve.

While everyone walked away with life-changing amounts, Tess and her husband, Luke stunned the bookmakers by making the most money over reserve and taking home an extra $100,000, delivering them a massive total of $730,000 in winnings.

“We are so thankful for the opportunity to be on The Block. Despite the rocky road it has been life-changing, and we have grown stronger together as a couple,” Tess and Luke said

“This win allows us to get started on a life together we could have only dreamed of before.”

The “kids from Cairns” had a rollercoaster year on The Block. After a shaky start when they were unable to produce a finished room for the first two weeks, they found their stride and confidence when they won main bathroom week and converted their studio space into a standalone apartment.

Budget issues caused them angst towards the end of the season, but they managed to pull it together and finish their house against all odds, creating one of the most loved homes on the show this year.

Host Scott Cam, along with Shelley Craft and the gang, will be back to challenge a fresh batch of Blockheads when the program returns for its 16th series in 2020 in Brighton.