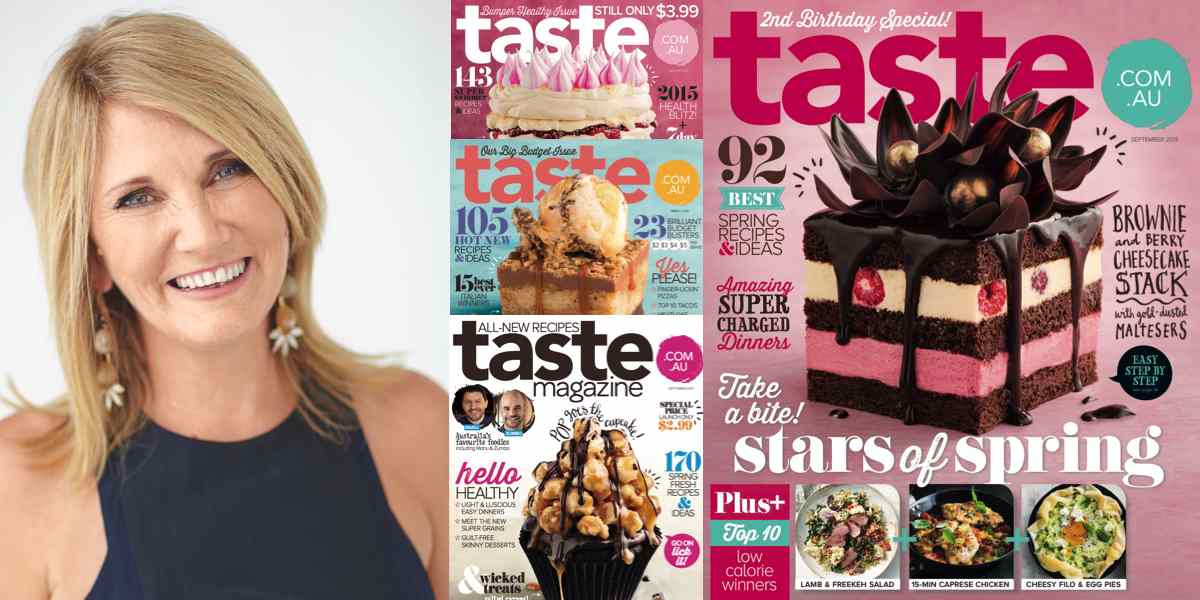 Taste.com.au magazine editor-in-chief Brodee Myers-Cooke: “You have to be different”

On stands now, the September issue of the Taste.com.au Magazine marks the NewsLifeMedia title’s second birthday. Since launching the offshoot of the incredibly successful website in September 2013, the masthead has gone from strength to strength. As well as landing in the Top 20 Most-Read titles in Australia, it has won a place in the Top 20 Biggest-Selling Titles list and managed to lift circulation by almost 1%.

According to editor-in-chief Brodee Myers-Cooke, who is editor-in-chief across the whole brand, the title has built a loyal audience. “They always say that the second year of a magazine is the hardest, because the launch budget has been spent and unfortunately a lot of that novelty, that shiny little edge that you had is gone. You’ve got a situation where everyone is trying to decide if they want to come back for more, and we’ve seen this year that they are. We’ve just made it into the Top 20 for readership, which shows how far we’ve come. We’ve also seen constant rises with each survey, in defiance of all the current trends – I’m not sure if anyone else has done that.”

Speaking to Mediaweek, Myers-Cooke had good news beyond the circulation and readership data. “Our cookbooks are going gangbusters. We’re well over all of our budget targets there and our print subscriptions are up 13% year-on-year.

Part of the title’s unique formula for success is what Myers-Cooke calls show-stopping covers. “We’ve gone with amazing cover images since launch. There’s a feeling that everyone’s seen everything in food already – people who look at food digitally see hundreds of images per week across Facebook, Pinterest and Instagram. We need to make people stop in their tracks when they see a cover.

“Taste.com.au is really
service journalism at the end of the day.“

“Over the two years, we’ve had some really memorable covers like the salted caramel popcorn cupcake, an Iced Vovo pavolva, a Golden Gaytime Slice – that was a total breakout sale. Last month we ran a Caramello cake. Each month, we try to up our own ante. Hopefully we won’t run out of ideas. Poor Michelle [Southan, the taste.com.au food director] will kill me someday – she’ll often have to test a recipe 20 times before she’ll put it in the mag.”

Despite the plethora of health and wellness bloggers, it’s hard to know which sources are trustworthy. “Over the past year, the credibility of some bloggers has been called into question in a highly visible way. I think it’s made people think carefully about where they get their health and food information from. That’s why, in the last month, we’ve launched taste healthy. Taste.com.au is really service journalism at the end of the day – it’s not just where to get a recipe for dinner, but also where to get the right information. We’re spending a lot of time looking at how to communicate academic information in a way that everybody gets. We only talk about healthy food that’s in supermarkets, that you don’t have to go to a whacky corner of the earth for. We’ve just recalibrated the content in the magazine to do a health feature each month, starting in October with a health myth-busters feature looking at things like whether kilojoules consumed at night are more fattening than those consumed at other times.

“When it comes to health and food we want to be the trusted voice out there that’s worth listening to, drawing on our newly enlisted team of health academics – the Taste.com.au Health Council. We’re nine years old as a brand in a few months, and we thought that it was time to take leadership in that area. We’ve got healthy recipes – and the key thing is that they’re tasty, affordable and easy!

As such, Taste.com.au launched its 30 Days of Healthy Dinners initiative for the month of August. “Since we launched, this has proved to be our most popular non-recipe content – it’s showing that there’s a real appetite for healthy eating information.”

As well as providing consumers healthy dinner suggestions for every day of the month, Myers-Cooke and her team rolled the promotion out across agencies. “We had a Taste-branded food truck rolling around to agencies. We cooked recipes from Taste.com.au for breakfast, morning tea, lunch and afternoon tea, and gave people vouchers for the food truck which had green smoothies, bliss balls and an amazing vegetarian salad. We shared it on social, and people were asking when it was coming to their suburb!”

When we asked Myers-Cooke about what the next two years and beyond held for the brand, she revealed that there were big plans in place across all the Taste.com.au platforms. “We’re looking at content across the board and developing some pillars that will really resonate with our readers. We know that people who love food will really get on board, and we’re hoping to build communities across them.

“By taking a 360 degree focus, we feel we can really spearhead cross-brand stuff. The main thing for the future will be that we don’t want to rest on our laurels in being #1, we want to always stay on the front foot. Even with a lead like ours, it’s important to stay hungry,” she continued.

“We are continuing to put the user at the middle of everything that we do, and making that experience a very personal one for them. It’s hard as a big brand to do that, because everyone has their own personal health thing whether it’s gluten-free or low-cal or vegetarian. We’re making sure that we customise what we do to each user, and that our database is red hot. The thing that we do quite well is look at a trend and rather than just reflect it we look at where it’s going. We try to predict the next step – that’s the fun part of it!”

Although Taste.com.au Magazine is read by an impressive 612,000 every month, does Myers-Cooke worry about competition from the likes of the free Coles and Woolworths Fresh – which have a reach of 2.863m and 3.423m respectively? “It does sharpen the mind,” she laughed. “But, we do thrive on competition! There are a lot of free recipes out there, not just the Coles and Woolworths ones. Even our own website offers tens of thousands of free recipes. It just makes you very conscious of everything that you do – you have to make it different, you can’t be everyday. We try to do something that elicits a reaction, and that’s hard work. But it’s hard work that we want to do. Plus we love what Coles [the major Taste.com.au partner] does with us, and we’ve got some great things – some quite surprising things – that we’re doing with Coles over the next couple of months that the readers are going to love.”

Switzer Publishing’s Russh has announced three more international contributing editors – Tilly Macalister-Smith, Bridie Gilbert and Ilona Hamer all join the title as of its August/September Global issue. The trio are based between London and New York.