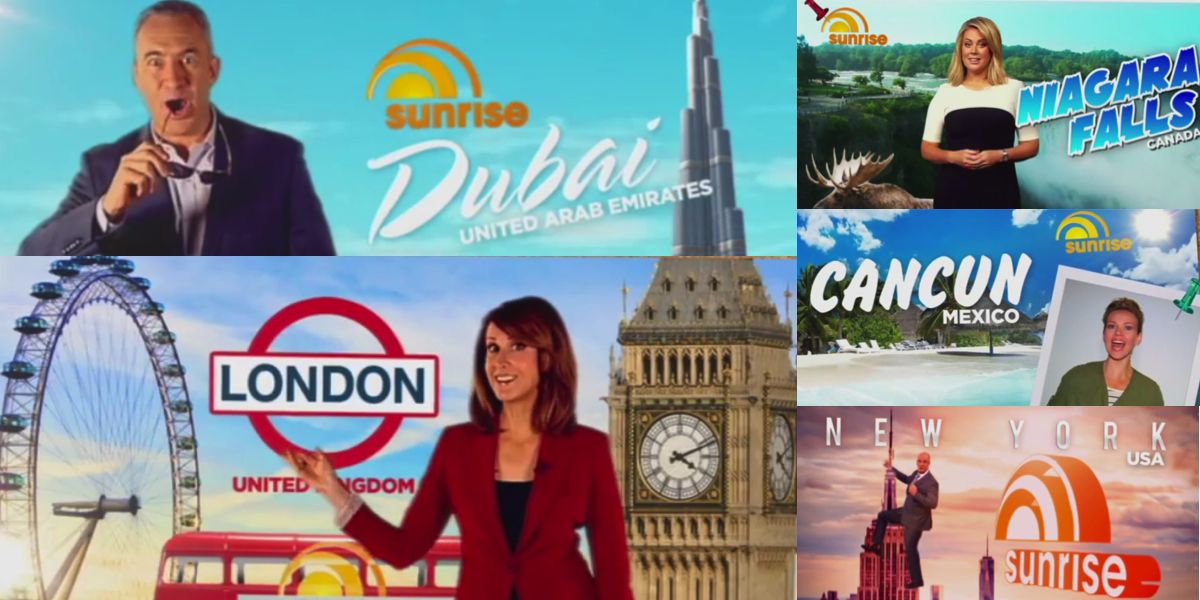 Starting next Monday, Sunrise is taking the show live around the world in just five days. It’s the trip of a lifetime never attempted by a TV program… because it’s almost impossible.
Get this – 39,686 km, 7 flights and a total flying time of 48h 22m!

Kochie, Sam, Nat, Beretts and Eddy will begin the week broadcasting on Monday in black tie from Dubai in the United Arab Emirates. The hosts and crew, totalling 25 all up, will hit the road when the show wraps each day.

Tuesday’s stop is London in the UK, where they will do the show from the banks of the Thames overlooking Tower Bridge.

On Wednesday Sunrise heads to the US for a whirlwind visit to the city that never sleeps, New York – a fitting destination for the one place they won’t even have time to check into a hotel!

Straight after that it’s on to the spectacular Niagara Falls in Canada for Thursday’s show.

Then Friday, for the final whistle stop on the Sunrise world tour – broadcasting from Cancun, Mexico.

“No other TV show has ever attempted this before, and there’s probably a reason,” said Sunrise executive producer Michael Pell. “Broadcasting three hours live from five countries in five days represents our biggest logistical challenge yet. If we can pull it off, it will make history and provide a spectacular week of viewing.”

On the biggest week in Sunrise history, the producers have assembled the biggest set of stars to take part in the adventure, including Ed Sheeran, Phil Collins, Adam Lambert and Seal.