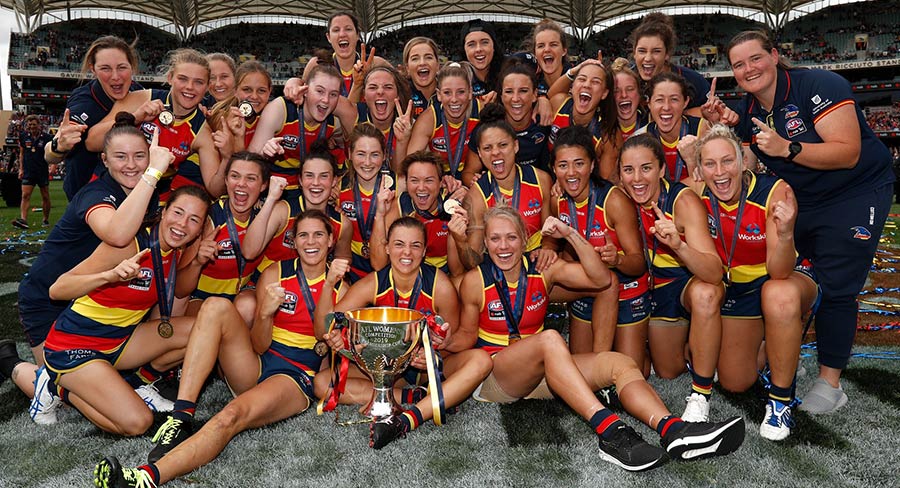 • AFLW was the big sports media story of the weekend

AFLW was the big sports media story of the weekend with 53,034 fans filling Adelaide Oval watching the home team Adelaide Crowes kick their way to victory in the AFLW Grand Final. The TV audience was up 71% YOY with a national FTA audience of 409,000 and a metro audience of 321,000. The streaming numbers were up 59%, but Seven didn’t supply a number.

Eddie McGuire stepped aside from his commentary duties for Saturday’s AFL clash between Essendon and St Kilda out of respect for double amputee Cynthia Banham after his criticism of her coin toss, reported the Herald Sun on the weekend.

But people hoping this might lead to disciplinary action the broadcaster, or maybe even worse, might be disappointed.

Prior to Sydney’s round 2 clash against Adelaide at the SCG, McGuire made what the newspaper labelled one of the biggest gaffes of his career and was subsequently slammed by the Swans and many AFL fans before issuing an on-air apology.

“Out of respect for Cynthia Banham and the Sydney Swans, I have requested not to call today’s game between Essendon and St Kilda,” McGuire said in a statement.

McGuire’s employer Fox Sports expressed its regret over the incident.

“We are disappointed with the comments made and we deeply apologise to Cynthia, her family and the Sydney Football Club.”

The debate about the size of McGuire’s gaffe raged all weekend in media and on social media.

Such was media interest this morning that Seven had a reporter outside the Triple M studios with live crosses at regular intervals.

On his Triple M show on Monday morning, McGuire delayed discussing the slip up until 7am when Wil Anderson joined the team.

There was brief a brief discussion about the incident with McGuire again explaining he was completely devastated and he again offered “sincere apologies”. He added he is solely to blame with no one else responsible for what he saw and then commented on during the Friday pre-game coverage on Fox Footy.

Wil Anderson asked McGuire this morning if he had thought about stopping something like this happening again. “Yes I have,” McGuire replied.

The Masters next week on Fox Sports

Fox Sports is promising Australian golf fans the most comprehensive coverage of the year’s first major tournament The Masters with live, ad-break free coverage on a dedicated channel.

The Masters will be staged at the Augusta National Golf Club from April 12 to 15 and will feature the world’s best golfers vying for the coveted Green Jacket.

Fox Sports will air all four tournament rounds of The Masters live and ad-break free.

Fox Sports 505 will become a dedicated 24 hour channel from Monday, April 8 creating a one stop destination to immerse fans in the historic tournament.

The Masters Channel will feature the Masters Films, a series of documentaries which look back on some of the biggest wins from across Masters history including Tiger Woods’ four victories, Phil Mickelson’s three triumphs and Aussie Adam Scott’s historic maiden win in 2013.

Masters – On The Range also returns in 2019 providing fans with analysis, interviews and previews from the practice range of Augusta National, including live analysis after each competition round.

The Masters Channel will also air the traditional Par 3 competition on Thursday morning, April 11, which brings out the greats in the game as well as some special guests, and will also air replays of each competition round.

Fox Sports’ golf expert and former professional Paul Gow will be on the ground to provide daily news reports from the event for Fox Sports News.

Fox Sports’ digital channels will continue to deliver multi-camera coverage of the tournament with fans able to watch Featured Groups, Amen Corner (holes 11, 12 and 13) and the 15th and 16th holes via the Fox Sports App or at Foxsports.com.au.

Writing in Nine’s The Sun-Herald yesterday, reporter Danny Weidler said television networks will determine the optimum number of NRL teams in the competition, and they believe that number is 16:

The NRL has already been forced to squeeze the eighth game of each round into the unpopular 6pm Friday slot when most people aren’t even home from work. Where they would put a ninth game if the competition was expanded to 18 teams is anyone’s guess. People are suggesting games in Perth would be a good idea.

The free-to-air networks would not support a game on Sunday night when they are airing premium shows.

And here is the kicker: the NRL would also have to come up with an additional $26 million a year to fund two teams, money that simply won’t be forthcoming in the next television deal. Many within the NRL fear the next TV deal will be smaller than the present one.

The expansion furphy was thrown up by Australian Rugby League Commission chairman Peter Beattie, who initially supported it, then said it was too hard, then put it back on the agenda.

Commissioners have confided that expansion has not been on their radar and are bemused by the public discussion. If it’s being pushed from within the NRL to get a reaction, it has worked. It has also stopped us talking about the tsunami of off-field drama.