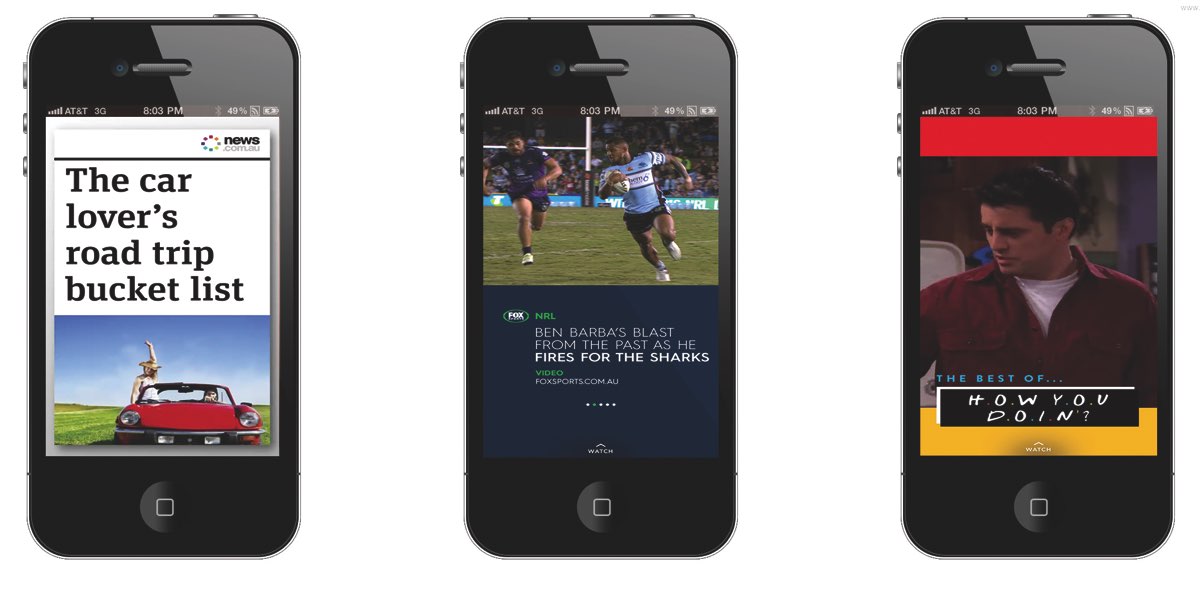 Just over a month into Snapchat Discover launching in Australia, the only local publishers pushing content on the platform remain cautious

Just over a month into Snapchat Discover launching in Australia, the only local publishers pushing Australian-produced content onto the platform are remaining cautious.

News Corp properties news.com.au and Fox Sports both appreciate the need to connect with Snapchat’s predominantly youth audience through the platform, but the traffic they have witnessed since its February 2016 launch has remained in the growth stage.

“There is a reasonable audience there. I think at the moment for us it’s all about forward potential,” explained NewsLifeMedia’s Julian Delany.

“It’s early days for us with regards to a mass audience. The Snapchat audience might be large, but the Discover channel is still at early stages. It’s a good place for us to be because it is a place for us to expose our brand to an audience who might not have usually thought to go to news.com.au for their news,” he said.

Snapchat Discover is the instant messaging application’s bid to evolve Snapchat into a communications platform that goes beyond its core messaging function. While it has only just launched here, overseas it has become a vital component of publishers’ online strategies.

It has been over a year since Discover launched in the US where it has gained considerable traction. Cosmopolitan receives an average of 20 million views per month from Snapchat Discover alone. BuzzFeed CEO Jonah Peretti has reported that Snapchat views now comprise 21% of his company’s total traffic.

For the uninitiated, a Snapchat user opening the app is immediately confronted with a camera to shoot a photo or short video to send to friends. Swipe left and you can see messages sent to you from your own friends. Swipe right and you’re in Snapchat Discover where brands such as CNN, Fusion, Vice, BuzzFeed, IGN, Cosmopolitan, Vox, MTV, Food Network, National Geographic, and Comedy Central all have channels filled with video, photos, and text articles.

The traffic from Snapchat is so valuable that featured brands are now employing dedicated staff to manage the channels. Female-focused site Refinery29 has ten employees working on the channel.

While Discover is a platform for official partners, there are also a number of media companies using private Snapchat channels as a distribution platform for content. Last month The Wall Street Journal reported on rumours that Playboy is looking to buy startup Arsenic, a media company that crowdsources Playboy-esque images of women. Meanwhile there are also content creators like Cyrene Quiamco, an artist who has had companies pay up to $30,000 for her to create content for her channel.

Back home in Australia, the use of Snapchat Discover is only just starting. While several international brands are just using content created overseas in the Australian market, news.com.au and Fox Sports are actively publishing to their channels. Unlike overseas, however, there hasn’t been the investment yet in dedicated teams to manage it.

“All of the content that goes into that Snapchat Discover channel is actually part of our overall offering on the desktop site. But we choose that content for that Snapchat audience, which is younger. So the content is selected for that particular audience,” revealed Delany.

In the early stages of being on the platform, NewsLifeMedia is waiting for the platform to mature more locally before investing in exclusive content for their news.com.au and Fox Sports channels. “Our additional resource investment into it will remain as is, which is reasonably solid. We’ve got someone on it doing that amongst other things in the multimedia storytelling space within
news.com.au. We would like to see it get a bit bigger before we start really investing in it.”

In the meantime, Delany is closely watching the metrics that they are recording through the platform. These metrics reveal the figures one expects, such as time spent, how many snaps are consumed, and which snaps are consumed more.

Delany and his team are also learning what sort of stories perform well on the channel. They quickly established that highly visual stories perform the best, in which a story can be understood through an image rather than with text. Also, the story needs to be relevant to the youthful Snapchat audience.

“Traditional stuff like entertainment content does work well. However, technology stuff also works well. Particularly stuff like hacks. We’ve got a story up there today about what is the story with the latest iPhone. Whereas news about what’s happening with the supposed election on 2 July, that sort of stuff isn’t going to fly. That’s just common sense,” he revealed.