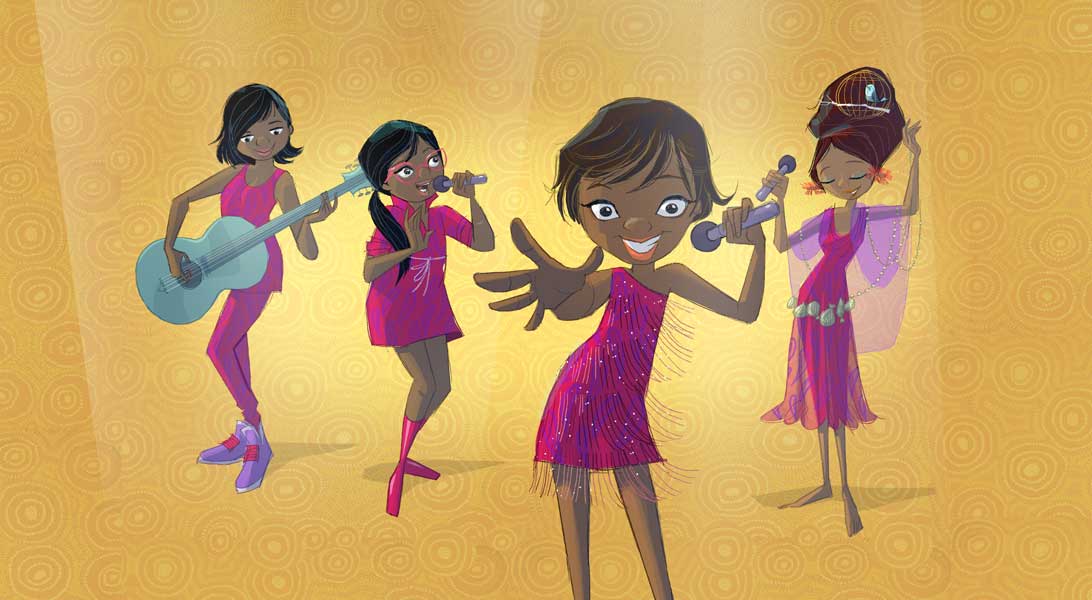 Australian box office smash The Sapphires has been adapted as a 26 episode animated musical comedy aimed at kids.

The 2012 Australian film The Sapphires is being adapted to television with a major twist – it will be an animated series.

Goalpost Pictures have teamed with kids production company Sticky Pictures to produce a 26 episode 22 minute series that will be aimed at older kids, with a broader family audience in mind. While the show will stay true to elements of the original film, which earned over $14 million at the local box office,  the new series will feature contemporary storylines as the series follows Aboriginal teenagers Gail, Cynthia, Julie and Kay on their musical misadventures in a fictional rural Australian town.

The Sapphires is now in the final stages of development.

Australia’s leading independent feature film and TV drama producers, Goalpost Pictures and Australian kids and comedy production powerhouse, Sticky Pictures, announced today they are in the final stages of development on “THE SAPPHIRES”, an animated series based on Goalpost Pictures’ successful feature film of the same name.

Developed with broadcaster ABC TV Australia as a 26 x 22 minute series, “THE SAPPHIRES” will be aimed at a kids (7-12 years) and family audience.  Blending comedy and character-driven drama with great musical elements, the series follows Aboriginal teenagers Gail, Cynthia, Julie and Kay on their musical misadventures in a fictional rural Australian town.

The animated series will capture all the fun, warmth, sass and sweetness of the top-grossing 2012 Australian feature which won 12 Australian Academy of Cinema and Television Arts Awards, premiered at Cannes Film Festival and was released in over 16 countries. The accompanying soundtrack album was a double platinum success for Sony Music.

“THE SAPPHIRES has been a wonderful journey and we are delighted Sticky Pictures is partnering with us to reach a brand new audience.  We are thrilled to be working again with writers Tony Briggs and Keith Thompson; the magic that was created on screen for the original movie looks certain to appear again with the TV series, which, like the movie, will have a phenomenal soundtrack.  The characters in THE SAPPHIRES are strong and inspiring role models and it is exciting for us to see the connection with a young audience” said Kylie du Fresne from Goalpost Pictures.

“We are thrilled to be in the final stages of development with Goalpost Pictures on “THE SAPPHIRES”.  Goalpost Pictures enjoyed incredible international success with THE SAPPHIRES feature film and we know this animated series will be a winner with local and international audiences.  The animated series will stay true to the award-winning elements of the feature film however with contemporary storylines, fresh soulful music and animation it will take on a whole new feel that will be enjoyed by lovers of the movie and will win itself a new generation of fans” said Sticky Pictures’ CEO and Executive Producer Donna Andrews.

Developed with support from ABC and Screen NSW

Goalpost Pictures are among Australia’s leading independent producers of feature films and TV drama. In 2013 they were the Screen Producers Australia (SPA) Production Company of the year.  Their new television drama series CLEVERMAN, produced with New Zealand’s Pukeko Pictures, and Red Arrow Entertainment will have its world premiere at the 2016 Berlin Film Festival, and will broadcast on ABC Television in Australia and SundanceTV in North America. A second season is in development.

Goalpost recently released to great critical and audience acclaim the feature film adaptation of HOLDING THE MAN, based on the much-loved memoir of the same name, directed by Neil Armfield and starring Ryan Corr, Anthony LaPaglia, Kerry Fox and Guy Pearce.  Other film credits include FELONY, written by Joel Edgerton and starring Tom Wilkinson, Joel Edgerton, Jai Courtney and Melissa George, released in Australian cinemas in 2014 and in North America in early 2015, and the 2012 smash-hit THE SAPPHIRES, which made over 25 million dollars worldwide.

Their extensive television drama credits include ABC TV’s AN ACCIDENTAL SOLDIER which was nominated for 2014 LOGIE and AACTA awards and the award-winning 52-part Tim Winton series LOCKIE LEONARD for Channel 9/BBC.

The company’s productions have sold around the world, have screened at international festivals including Cannes, Berlin, Sundance, Locarno and Toronto and garnered Rose d’Or, BAFTA, AFI/ AACTA, Crystal Bear and Logie awards and nominations.