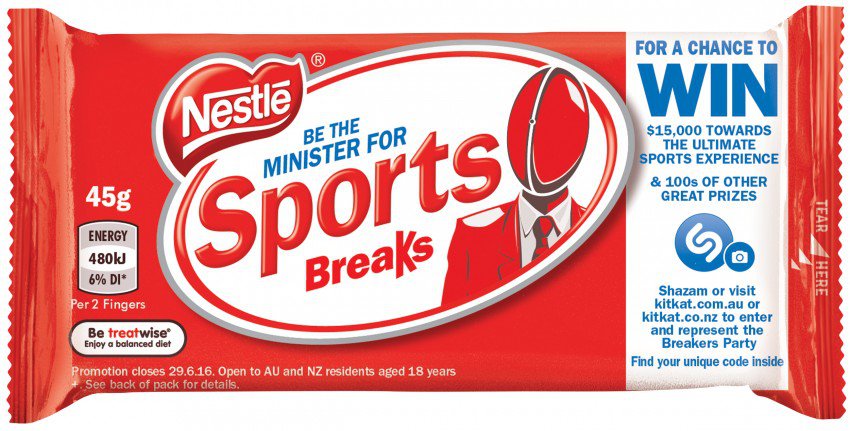 A recent campaign with Kitkat is part of an ongoing education process by Shazam to show users they are more than just audio recognition.

We can all agree that QR codes, while they have their uses, are also exceptionally dorky-looking.

Shazam, in an effort to reduce the friction for consumers and marketers, have launched visual recognition software to allow users to better connect digital experiences to the real world. This month it launched a partnership with Nestle chocolate brand Kit Kat to power a competition allowing Kit Kat consumers the opportunity to win prizes. Users simply direct their phone cameras at a Kit Kat bar and look at it through the Shazam app.

“The last thing a creative agency wants to do is slap a QR code onto lovely creative. We allow them to do that without that visual stigma that was always associated with QR codes,” explained Shazam VP Asia Pacific Steve Sos.

Visual recognition is the next logical step for Shazam, which built its brand familiarity on recognising audio clips. The Shazam app has become an oft-relied upon tool for many smartphone users identifying songs heard on the radio. Shazam soon extended its use to include audio recognition for promotional uses. “We’re obviously synonymous with audio recognition and that’s where the heritage lies,” Sos said.

Recognising a song or other audio clip was just a one-touch step for Shazam users, but will users think to use Shazam for visual recognition in the same way? Sos acknowledges that users familiar with Shazam may still need to be encouraged to rethink of it for visuals.

“Users are getting it, but without doubt there is an education job we have been doing and continue to do to get them to embrace both aspects of the technology. You will see a lot more ongoing education within the app and also potentially some external education pieces. One of the things we obviously benefit from is having great partners that we’re working with. Kit Kat and Nestle is a great example in this instance. When you put your branding out there jointly on a product, that’s helping the education and works for both parties in that sense,” he advised.

The partnership with Kit Kat developed out of a think-tank session held by Nestle last year. Multiple vendors were invited to demonstrate their respective technologies, with Shazam eventually chosen to work with them on a campaign.

Sos is clear on why he believes Shazam has been successful in establishing partnerships like the current Kit Kat campaign and another with KFC over the summer cricket season. “There’s a couple of things we have in our favour. More than anything, we’ve become a verb. People Google it. People Shazam it. That works heavily in our favour. The scale – the fact we can bring millions of smart phones to the party without people having to download another app. It differentiates us to a lot of the other technology players that are out there. They’re great and doing some very good things, but at the same time there’s more friction in the process for consumers because of the extra step in first download the app, then interact with it, and then understand what they’re doing”.