Over the past 49 years, the people of Western Australia have donated over $232 million to Telethon to support crucial child health research, provide much needed medical equipment, and drive social welfare programs within WA.

The marathon 26-hour TV broadcast went live across Channel 7 Perth and across WA on GWN7. It was streamed nationally via the telethon7.com and thewest.com.au websites. 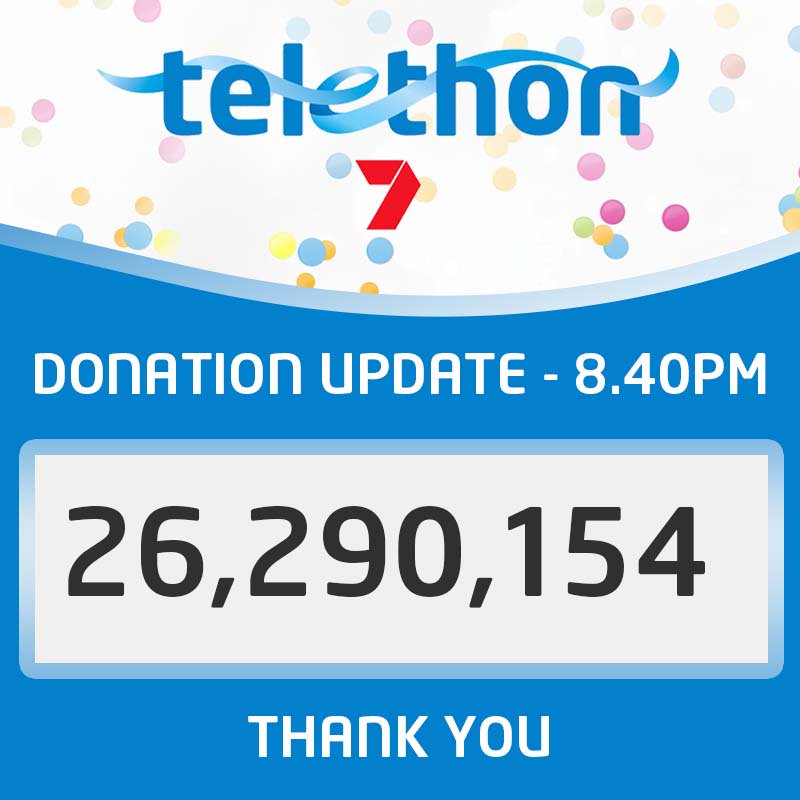 The team at Channel 7 Perth and The West Australian led an army of volunteers, plus more than 250 TV production crew, 600 entertainers and 1,000 volunteers to make this Telethon weekend the most successful ever.

BHP Billiton kicked off the weekend with a donation of $4 million dollars as part of a $20 million five-year commitment from them. Wesfarmers also continued to donate with a further $1.25m. Andrew and Nicola Forrest‘s Minderoo Foundation contributed $1 million, by matching all of the donations phoned through to The Sunday Times Call Centre in the first few hours of Telethon on Saturday night.

Minister for Foreign Affairs Julie Bishop donated $1.5 million from the Federal Government. The Lexus Ball raised an outstanding $1 million from the generosity of their guests, which included some massive donations from individuals totalling $336,000 to fund an important autism research project at The Telethon Kid’s Institute. Premier Colin Barnett handed over a cheque for $500,000 from the State Government on behalf of all West Australians.

The Telethon Adventurers raised over $500,000 during the year including a generous $250,000 from Bill Beament on behalf of Northern Star Resources.

Seven Network personalities from Home & Away, 800 Words, Sunrise, The Chase Australia and The Secret Daughter got into the spirit of Telethon with Mark Gibson. They competed in some very funny, and often very messy, live challenges to see how much money they could talk Crown Perth into donating. It ended up being a whopping $2.5 million. Crown has now donated over $13.1 million to Telethon.

The Flight Centre telethonauction.com.au which ran throughout the weekend raised an amazing $103 280.

In the closing stages of the broadcast, executive chairman of Seven Group Holdings and chairman of the Channel 7 Telethon Trust Kerry Stokes contributed $1.5 million on behalf of his private company Australian Capital Equity.

“W.A. is going through some very tough times economically, so we really appreciate the effort that people have made this year in digging deep, not only for this weekend, but right across the year in helping Telethon reach this special amount.  My thanks go out to all of the mums and dads and their kids, who have helped raise money for Telethon over the past 12 months.” he said.

Local West Australian My Kitchen Rules contestants Anna and Jordan plus Nev and Kell also joined in on the fun!

Social media again played a huge role in connecting celebrities with their fans across the Telethon weekend, with loads of personalities taking to the Telethon Twitter, Facebook and Instagram feeds to interact live with more than 2 million users.

This year #telethon7 also had massive support from around the world including from the United States, Canada, France, Morocco, Norway, Germany, Italy and South Africa. In the always competitive River competition, South this year defeated North for the area with the most donation.