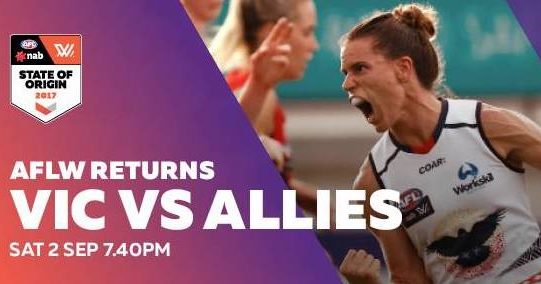 Hamish McLachlan will host the broadcast for Seven

Seven will broadcast the inaugural AFLW State of Origin showdown when the biggest names in women’s football come together to represent Victoria and the Allies on Saturday September 2.

Before the bounce, Seven’s coverage will feature some of the biggest and most inspirational players in women’s football. Docker Dana Hooker talks about being a mother and transitioning back into football. Sarah Perkins reflects on her stellar year with the Crows as the star full-forward. Erin Phillips reflects on winning the AFLW best and fairest award.

Hamish McLachlan will host the broadcast with Jason Bennett and Nigel Carmody calling the on-field action, alongside premiership player Abbey Holmes in expert commentary. Field commentator Sam Lane will interview the stars of the game.