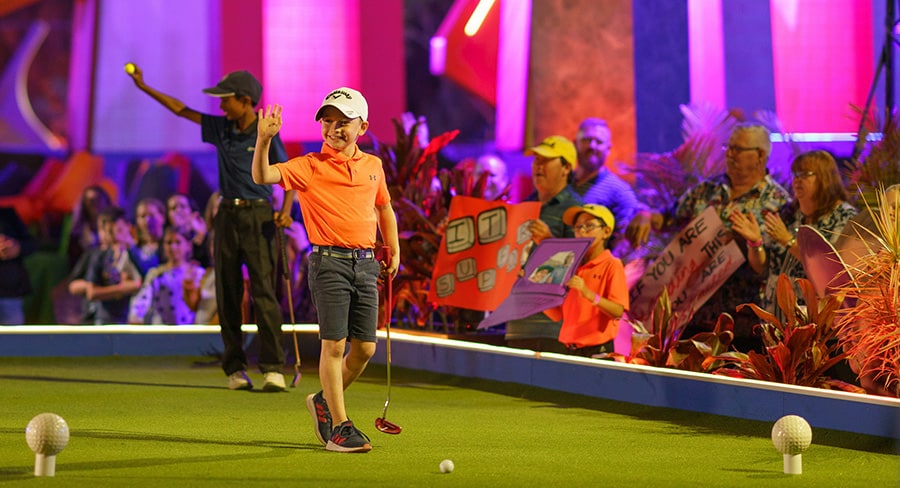 • While the kids take the putts, their adult caddies will take the hits on the course

Holey Moley Junior brings together eight of the country’s most talented junior mini golfers, ranging in age from eight to 10 years, to battle it out across three rounds. While they show off their skills on the most extreme mini golf course on the planet, these competitive kids are chasing the ultimate prize: the Holey Moley plaid jacket, golden putter, a $10,000 golf shopping spree, and the bragging rights that come with being crowned the world’s first-ever Holey Moley Junior Champion.

How will these golfing stars of tomorrow deal with the Holey Moley obstacles? That’s where their parents step in. While the kids take the putts, their adult caddies will take the hits on course favourites, including Putter Ducky, Dutch Courage, Putt the Plank any many more.

With hours of daily training and prior wins in junior golf tournaments, it’s an even pack heading into the competition.

Nine-year-old Oliver, who dreams of becoming a professional golfer, has his sights set on taking out the championship, “I love golf. I’ve been playing golf for as long as I can remember. I like the feeling of winning because all the hard work pays off.”

Teamwork is the key to success for nine-year-old Janie, “me and Dad are going to win because we are the best team,” said Janie, who has been playing golf for eight years. “Winning Holey Moley would be the best thing ever. I’m pumped!”

Eight-year-old Oscar has a clear strategy for the win, “getting a hole-in-one on the first one and dad getting through the obstacles.” Oscar’s dad, Jay, admits he’s feeling the pressure but is still confident, “he’s got the ability and I think I’ve got the agility!”

Standing by with words of wisdom for contestants and caddies will be host Sonia Kruger, Holey Moley’s resident golf pro Greg Norman and commentators Rob Riggle and Matt Shirvington.