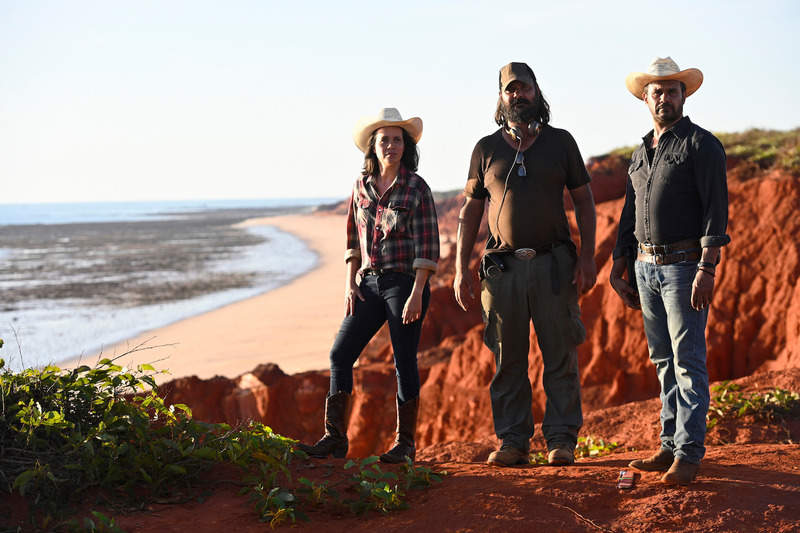 Screen Australia’s annual Drama Report released today shows expenditure in 2019/20 on drama production in Australia reached $991 million. This is 18% down on last year’s spend, largely due to the effects of the COVID-19 pandemic and the near total shutdown of large-scale drama production in March 2020.

The Drama Report uses data from industry to provide an overview of the production of local and foreign feature, television and online drama titles, as well as post, digital and visual effects (PDV) activity. All expenditure is allocated to the year in which principal photography began. PDV employs a secondary method of analysis, which is outlined in the PDV section below, and in the report. ‘Drama’ refers to scripted narratives of any genre.

Expenditure by Australian titles that started principal photography in 2019/20 accounted for 55% of the total expenditure, with $543 million generated by 74 Australian productions, down 32% on 2018/19’s record result. In total, 41 foreign projects (including PDV-only titles) generated $447 million in spend, an 8% increase in spend on 2018/19. 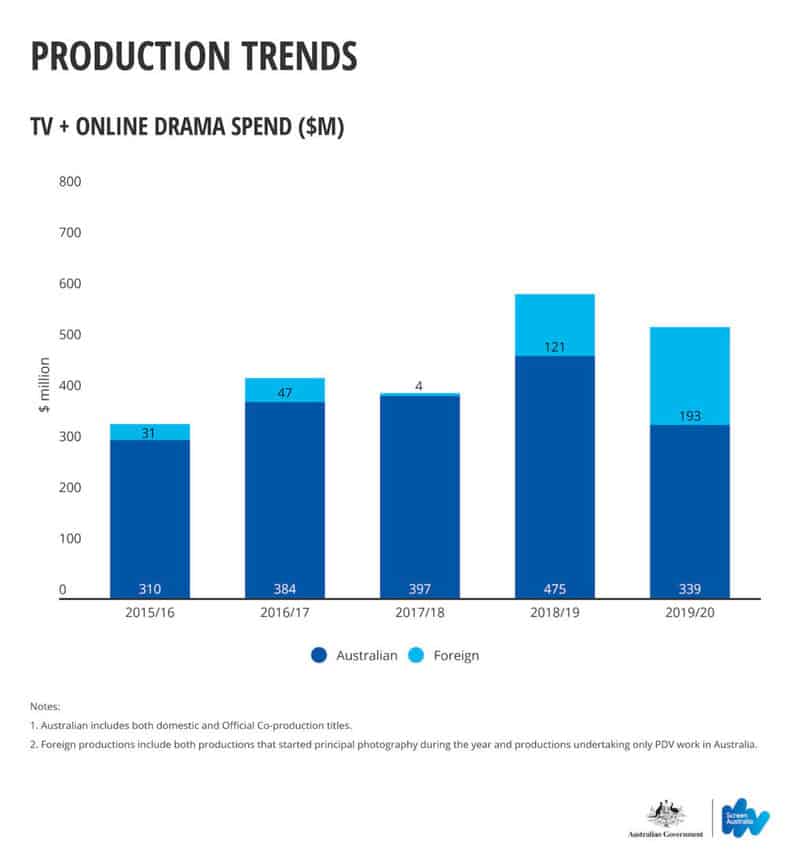 This year’s report provides an insight into the impact of the COVID-19 pandemic on the Australian screen industry, which resulted in the near total shutdown of large-scale drama production in March 2020, and continues to present significant challenges for production and the wider sector both in Australia and internationally.

Screen Australia’s Chief Executive Officer, Graeme Mason, said, “Never in the 30-year history of the Drama Report have we seen an event like the COVID-19 pandemic. While we looked on track to celebrate a record year in many areas of the industry, the pandemic is estimated to have postponed around 26 Australian drama titles with total budgets exceeding $325 million. This large scale impact is unprecedented.

“Several challenges remain with many projects reporting increases in costs as they make necessary adjustments to work in a COVID-safe environment, while others are yet to resume work or get started for a variety of COVID-related reasons. This will also have a flow on effect as some productions slated to commence work in 2020/21 have not been able to, with dramatic changes in production schedules impacting the availability of cast, crew and studio space. 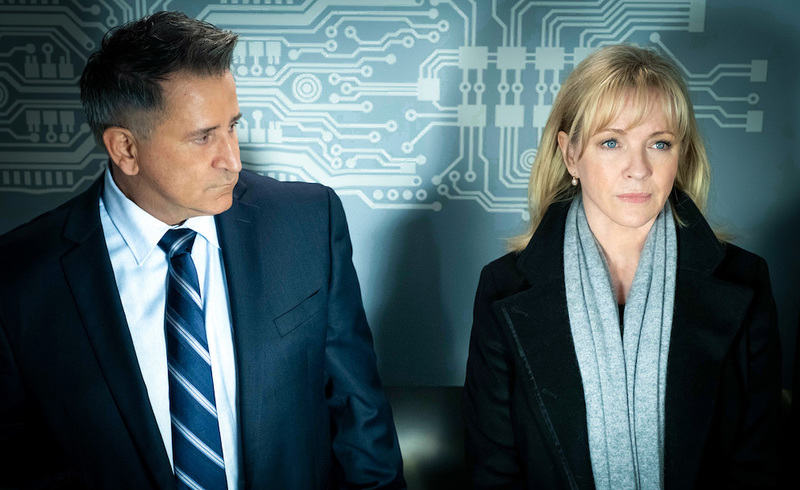 “Despite the hardships, I’m encouraged that our industry has been able to safely and markedly increase production activity and there are already positive signs that our sector will be able to bounce back. As a result of support from the Federal Government’s Temporary Interruption Fund (TIF) and Screen Australia’s direct COVID-19 funding we have supported a safe return to work on projects with combined production budgets of over $330 million. The TIF continues to fill a vital gap in getting productions back up and running and has now been replicated in many other countries.

“I commend everyone in the industry on their tenacity, resilience and ability to adapt and find ways to move forward in the midst of a global pandemic,” continued Mason. 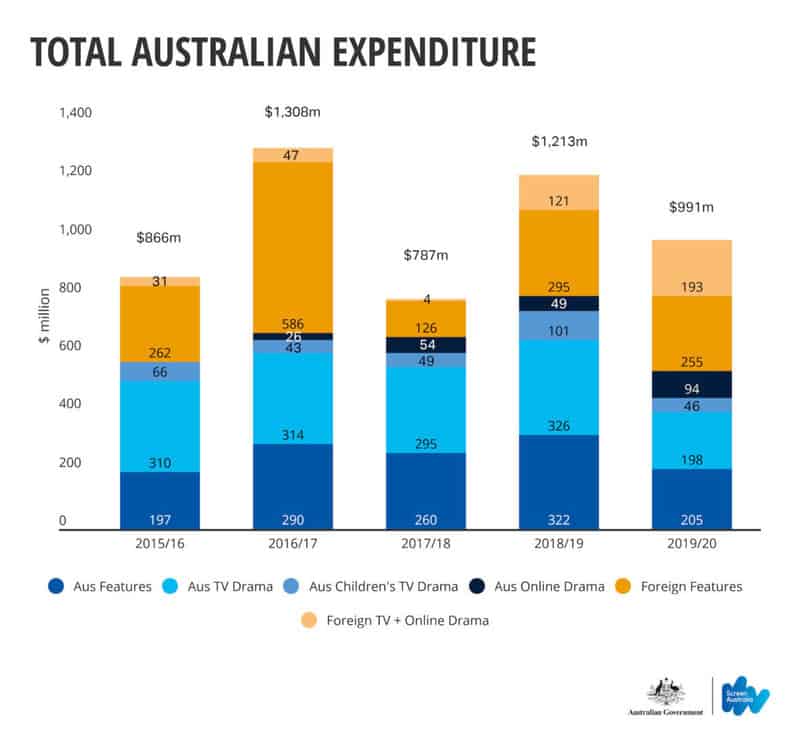 In 2019/20, $198 million was spent on 20 general Australian TV drama titles, with expenditure down 39% on last year’s record spend. 351 hours of content was generated and all titles had combined total budgets of $198 million. Series that entered production in 2019/20 included series 2 of ABC’s Mystery Road, Nine’s Halifax: Retribution, ABC’s Wakefield and series 2 of Network 10’s Five Bedrooms.

Twelve children’s dramas entered production in 2019/20, with a total spend of $46 million and generating 78 hours of content. This spend was 55% down on last year, with budgets also down by 52% and hours of content down by 51% on last year’s six-year high. One children’s TV drama that entered production in 2019/20 had its shoot interrupted due to COVID-19. Evidence suggests that two children’s TV drama titles, with budgets of more than $10 million, were postponed due to COVID-19.

ABC financed seven of the 12 titles in production, including animations Kangaroo Beach and Space Nova (which was also financed by Nine), and live action titles including First Day and the third series of Mustangs FC. NITV was the first-release broadcaster for the live-action series Thalu, which was also financed by the ABC. Five titles entered production that were financed by the commercial broadcasters including The Bureau of Magical Things series 2 (Network 10), The Gamers 2037 (Nine) and Kitty is Not a Cat series 3 and Tales of Aluna (both Seven). One title, Alphabet Street, was financed by Disney Junior.

The proportion of animated titles produced has declined over the last five years, with live-action titles accounting for around half of the yearly slate in the last two years.