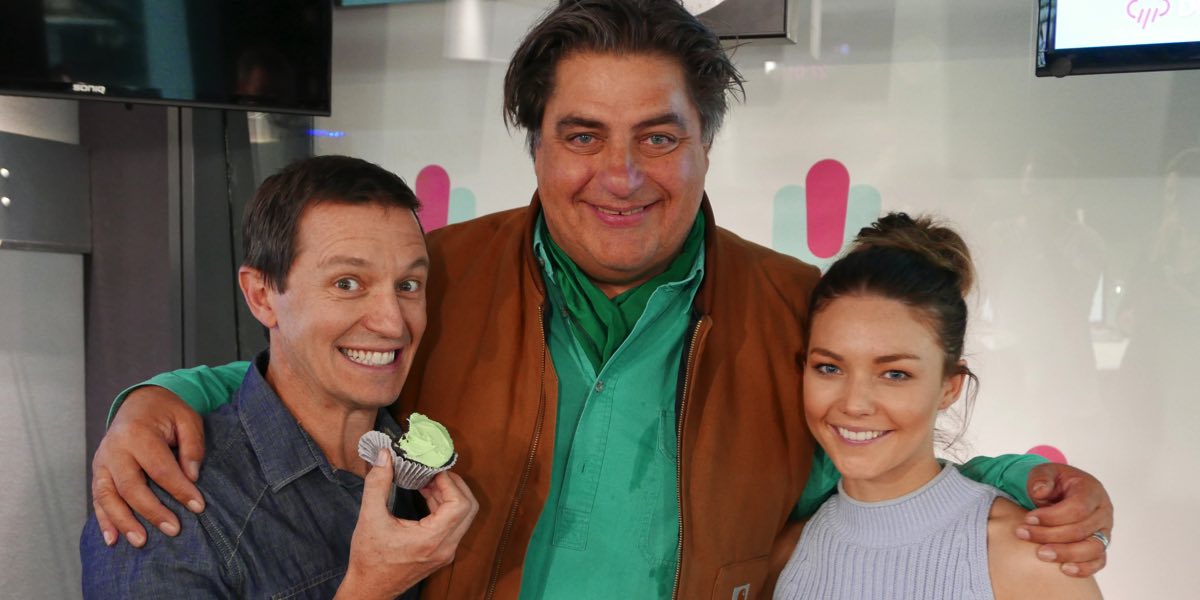 2DayFM’s Rove and Sam, an important show for the station and network: “We have to be dedicated and focused”

She is a super fast learner,” said Rove McManus about his breakfast radio co-host Sam Frost. “That sounds incredibly patronising but I sincerely mean it. I have been watching from the first day we brought Sam in for a test where we were told to bring three things – a news story, a personal story and an odd spot/kooky story. They put us in a studio together and it went really well. After that we said this girl is pretty good.”

McManus was sitting alongside Frost in the 2DayFM breakfast studio that has been the home to four separate radio shows in two years. The new tenants of this important piece of real estate are discussing with Mediaweek the selection process that resulted in them working together. Rove continued:

“We then did a callback audition. Sam then got notes asking her to do this, this and this. Wow – every note she took on board and executed it successfully. To the point that we said, ‘We think we are on to something here.’

“It is early days for both of us together, but where Sam is at now, at this early stage, is in some ways terrifying for where it could end up in the future. I better lift my game.”

Rove was first approached for a radio gig via an approach to his manager, Token Artists managing director Kevin Whyte. “I was back in the country and I had just finished a series for the Game Show Network,” said Rove. “I was back here with nothing much to do waiting to hear if there would be a second series.

“Kevin called, telling me this was something we would normally say no to. He asked me if this was something I would think about. My wife Tasma has been working here too and she has something on the ABC next year. The thought of putting some roots down in Sydney, which had been our Australian base, was a really appealing idea. Looking around it seemed that now was the time to do it with a spot here we could fit in to. Initially there was general talk about doing something for the network, not necessarily breakfast radio.”

Asked what Whyte warned Rove about before taking the 2Day job, Rove said: “The hours were the big one. He talked about how you would have to go about your day. Kevin’s main piece of advice was when he explained that even though it is one show in one city, it is a really important cornerstone to the station and the network as a whole. It really is very important what you do and you have to be dedicated and focused, which we are doing because we are working pretty hard.”

When asked about seeking other advice, Rove said he spoke with Pete Helliar. “But his experience in here wasn’t really the most positive one.” Helliar has worked in the past on 2Day breakfast with Judith Lucy and at Triple M Melbourne with Myf Warhurst. Helliar also guest-hosted one morning with McManus when Frost was off for a day.

Despite her success on two TV series with Network Ten, Frost said she never really thought she might have a career in the media until she signed the contract with Southern Cross Austereo.

“I have never had unreal expectations of where my career would go. I was very surprised when I found out I might get to work with Rove and I feel very honoured.”

Rove: “I was shocked that Sam was even available. Initially when put to me as an idea – via my wife Tasma – I was like she must be signed elsewhere for a couple of years. I got word back from my executive producer [Tim Dunlop]. He just emailed Sam to see what she said – we were very lucky.”

The strategy for how the show is set up each day is something Rove has been a part of. “It was important for me that the show has an open and a close. The show has a definite start and finish with produced pieces. At 6am you wonder if you really need it, but I have a really old school way of thinking that we should have a definite start and finish. Most people will join us for a small window some time during those three hours.”

Another Rove trademark are the pre-packaged intros for each interview.

Rove: “We are doing them on the fly at the moment. In time it would be nice to produce them up a little bit more. I like an introduction for a guest to remind people who the guests are.”

At 6pm each day prior to the show there is a conference call with producers that outlines the plan for the following morning.

The hosts are in at 5am and at 5.30am they start a briefing process.

Rove: “We have a meeting every week which is called the ‘no idea is too stupid’ meeting.”

“I did 10 years of my show in Australia, then two years in Los Angeles. At Ten when I was there it was never the #1 network and we were never the #1 show. We did really well though. It was a rollercoaster ride with some great years – the era of The Secret Life Of Us and Big Brother at its peak. There were other times when the network was struggling and we were struggling accordingly. It’s not like we were ever a #1 show on a #1 network. But we were successful and that led to longevity and acclaim. We do have a bunch of shiny statues at home from people who were watching who agree.

“All we are looking for here is to produce a show that we are proud of and enough like-minded individuals agree so that we keep our heads above water.

“I never worried too much about the numbers [ratings], only to the point that if you are doing terribly you know your days might be numbered.”

“I don’t like putting pictures of my child on Instagram because that is not her choice. If I do post a picture it might be a chubby little hand or something like that. I had to wonder that if by putting her voice on the show [during week one] was I crossing the line? I played the song for P!nk who we know quite well and she loves Ruby.”

“I gave him the thumbs up over the phone. He is sensational. I was in LA and he was in New Zealand. After an hour and 45 minutes on the phone we realised we were on the same page. He is a such a calming influence, no panicking whatsoever, which is exactly what I need.”

Some of the people the new 2DayFM breakfast co-host interviewed in week one were Chris Martin, Kylie Minogue and P!nk.

“I can’t wait to feel more confident. I still get very nervous. Even if I don’t know a lot about the person I’m interviewing, I still don’t have the confidence to execute it as well as I would like.”

“I had dinner with Andy Lee after the Melbourne Cup and he was amazing. He was all about backing yourself. He said they sometimes have worries but they also have a lot of fun. For me it was eye-opening and they are so inspirational for me.”

“I’m in between managers at the moment. [Rove: ‘Kev Whyte will come calling if you’re not careful.’]”

Rove: “Her life is already an open book and it’s up to Sam to choose how much of the rest of the story she wants to share.”

Sam: “I don’t have a filter at the best of times. I don’t mind having a laugh at myself. I get a bit funny about my family. Apart from my boyfriend…let’s exploit him.” [Laughs]