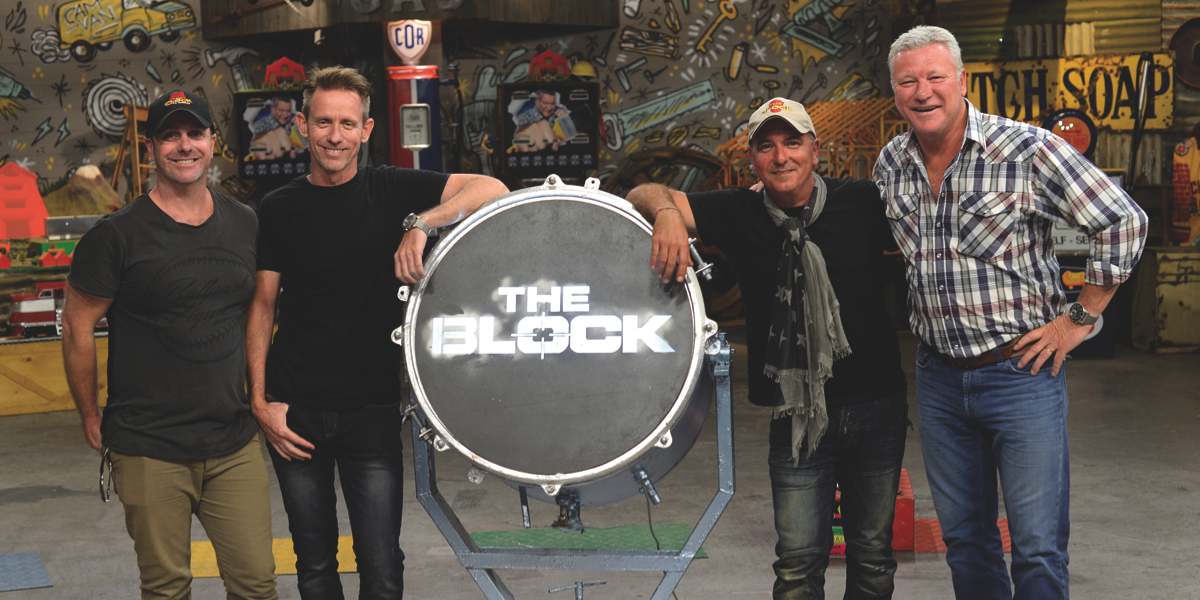 The Block EP Julian Cress talks competition from House Rules, no eliminations and the way that we consume television now

Australia’s longest-running reality format – and highest-rating series in television history – returns to our screen this month, with The Block set to kick off on Sunday 7 September on Nine.

Although this year’s The Block: Triple Threat delivered over $3 million in prize money to contestants, the audience of 2.027m tuning in to see the winner announced was a significant drop on the 3m+ Australians that saw Alisa and Lysandra win The Block: Sky High in 2013. We asked The Block co-creator Julian Cress if the back-to-basics approach that this season will take was in response to the ratings.

“We haven’t changed the format as such. The only thing that we’re doing differently with this series is that we are using a format that we used very successfully when we made The Block: Sky High and The Block: Glasshouse over the last couple of years. We cast characters who don’t have to go through an elimination process, which pretty much gives us the freedom to cast people that we want to be on the show from beginning to end. If you like, we’ve gone back to the original format of The Block, which we’ve repeated many times, and we’ve moved away from holding eliminations in the series,” he said.

The change is in response to audience demands, rather than ratings, Cress told Mediaweek. “People come to The Block because they want to meet the characters and see the rooms revealed. We did this version of the show, which is our favourite version, and the contestants were able to move straight into The Block and start doing rooms. That’s what the show’s always really been about. It gives people a really satisfying start to the series because they can look right into the characters and the renovations straight away. Our most successful series of the show throughout the history of the program’s 11 series have been the ones without eliminations,” Cress added.

“We’re always looking for property.
We don’t have one for the next series yet,
but we’re already on the hunt.”

As to the oft-cited idea that the audience is tired of renovation TV, Cress firmly denied it. “The ratings don’t add up to that. I can’t see any evidence in the ratings of that being the case. If you take Reno Rumble and House Rules for instance, both of those shows were on at the same time in the same timeslot. The combined ratings of those shows would have been around 1.5 or 1.7m people watching every night – that suggests to me that people aren’t over renovating.”

Cress acknowledged the changing nature of the television landscape, saying that a decline in audience for the format was to be expected in an age of streaming and video on demand. “The landscape is certainly fracturing in terms of a broadcast audience. When the first series of The Block was on, it was rating 2.4m every night. That’s massive – nobody gets that any more. If you’re asking what I’m hoping for, I’d like that 2.4m back. If you’re asking what I expect we’ll get, we’d be delighted with a million people watching the show every night. That would be a spectacular success in this day and age!”

Cress noted that although it would benefit the show if its entire audience watched it as it was broadcast, audiences no longer exclusively view linear TV. “If they watch in real time, it’s more engaging for the conversation around the show. If they can watch it and come together immediately afterwards or the next morning to talk about it, then it can certainly build the show. But having said that, I like most people choose to watch a lot of television on catch up because I simply don’t have time to watch everything that I want to. I understand why people view like that, and I respect it. I really don’t mind if people choose to watch The Block on an iPad at a café four days later – if that’s how they want to consume the program, that’s fine with me.”

The viewing metric that Nine applied to Married at First Sight – tallying initial overnight OzTAM ratings, encore screenings and time-shifted viewing – is fast becoming the industry standard, Cress said. “In a sense, if everyone chose to watch it at 7.30 on a weeknight, that’s certainly better for what is considered to be the success of the show, being the overnight ratings. But we all understand that people are choosing to watch in different ways now. Frankly, we do look at the total number of people who have watched the show and our advertisers do that as well. That contributes to the total success of the program. Even if the press doesn’t see it that way, the industry certainly does.”

While season 11 hasn’t yet gone to air, Cress said he and co-EP David Barbour were already hard at work on s12. “We’re always looking for property. We don’t have one for the next series yet, but we’re already on the hunt.”

>> “If shows have clear air, they do better”

Although Seven has already made a second series of House Rules for 2015, the network has yet to confirm if and when it will go to air. News of the cancellation of House Rules would clearly suit Cress, who noted that networks splitting the audience increased the challenge for both shows. “It would certainly give us a better run if they didn’t go ahead. But I don’t feel that House Rules is such a threat that it would kill us if they did run the show. It was a bit of a shame that Renovation Rumble and House Rules were on in the same timeslot. It hurts both shows in the same way that Restaurant Revolution has been so badly hurt by Seven putting it up against The Hotplate. If shows have clear air, they do better. We’re hopeful that they don’t run House Rules, but if they do then that’s on them.”

While Channel Nine is based in Sydney, The Block has been filmed in Melbourne since series four in 2011. While the Sydney property prices that Cress called “completely out of control” are partially to blame, he noted that Melbourne was attractive for a number of reasons. “We’ve made the series more in Melbourne [than Sydney], and it wasn’t a conscious thing at the beginning. But I must say that since we’ve been here, we’ve felt that the community in Melbourne really welcomes us. They’re always thrilled with us making over properties – this series, we’ve taken what was an incredibly iconic but ugly building in South Yarra that Melbourne has long had a love-hate relationship with. It’s a landmark, but a heinous one! We’re transforming it into something that will be world class, and the welcome and thanks that we’ve got from the community around us is one of the reasons we’ve continued the show here. It’s also generally an easier place to work, in terms of the dealings that we have with councils and neighbours.”

While Melbourne sounds pretty ideal, Cress that they would be open to other options. “We’d consider anywhere. We would take the show to Brisbane or Hobart if the right property presented itself and we thought that we could produce a successful season that would deliver a good result to our contestants.”