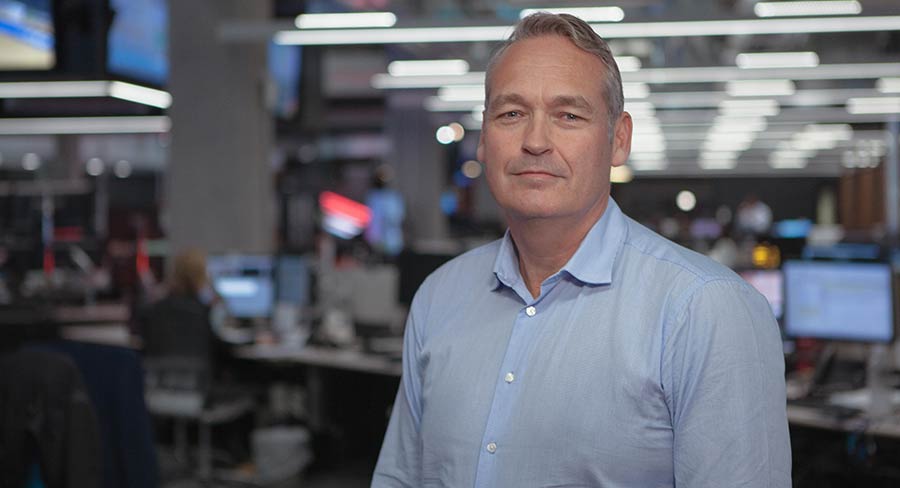 Meanwhile, John Gillespie has poached a star journalist John Campbell from TVNZ’s sister state broadcaster, Radio New Zealand. Starting next month he will take on a new role as a “roving reporter and presenter” working across platforms.

Both are significant changes for TVNZ, which has been seen as cautious and stable amidst earthquakes in the media landscape. “Steady as she goes” makes sense with a 6pm news bulletin that dominates the audience over five. On Tuesday, it had an audience of 700,000. Rival MediaWorks’ Newshub on Three has made some incursions into 18-39 demographic and 25-54s, especially on breakfast TV.

But the TVNZ news boss insists that he sees the wider media as the competition, not just Newshub.

Gillespie trained as a journalist at Mitchell College in Bathurst (now Charles Sturt University) after a period travelling. He later worked in New Zealand provincial TV, then breakfast in 1997. He ran the consumer show Fair Go, headed daily news shows and was head of current affairs. He replaced Australian Anthony Flannery as head of news and current affairs (HONCA) five years ago. TVNZ has been seen as more conservative than TV3 and the big print/digital players like Stuff and nzherald.co.nz.

Gillespie says change is inevitable with migration into social media and mobile devices. TVNZ – especially its digital news operations – is seen as more conservative by many.

A sober approach has been a conscious decision by TVNZ negotiating what Gillespie says is a “noisy” news landscape with fake news. TVNZ aims for ensuring a consistency across platforms.

“We are still high in people’s trust,” Gillespie told Mediaweek.

“Our news probably plays a straighter bat than some – we don’t edge toward the salacious as others do or entertainment stories that some believe are not news.”

Some in the industry detect a slightly more adventurous news agenda recently.

An earlier innovation at the end of 2017 was a shift to the third iteration of its 7pm magazine show Seven Sharp. The change coincided with the departure of popular presenters Toni Street and controversial right-wing broadcaster Mike Hosking.

Seven Sharp had faced incursions from the New Zealand version of MediaWorks’ The Project, which was aimed at a younger urban liberal audience. Gillespie insists The Project was not in his mind when he made the changes to Seven Sharp. Both shows, however, are a far cry from a decade ago when Paul Holmes on the TVNZ 7pm slot and John Campbell on TV3 competed as hard-nosed inquisitors for the news story of the day.

Gillespie poached high-profile RNZ’s John Campbell. Campbell has a strong loyal following on the left and on social media. Previously, TVNZ hired Paul Henry and Mike Hosking leaning to the right. At RNZ, Campbell has been pining to be back on TV. But how will he fit at TVNZ?

Gillespie: “He is one of the best broadcasters in the country and I think he is going to be brilliant.”

On Campbell Live and for the past two years he had licence to editorialise. Will that be the same at TVNZ?

“I think we work through the stories that John wants to do. I don’t have concerns,” Gillespie said.