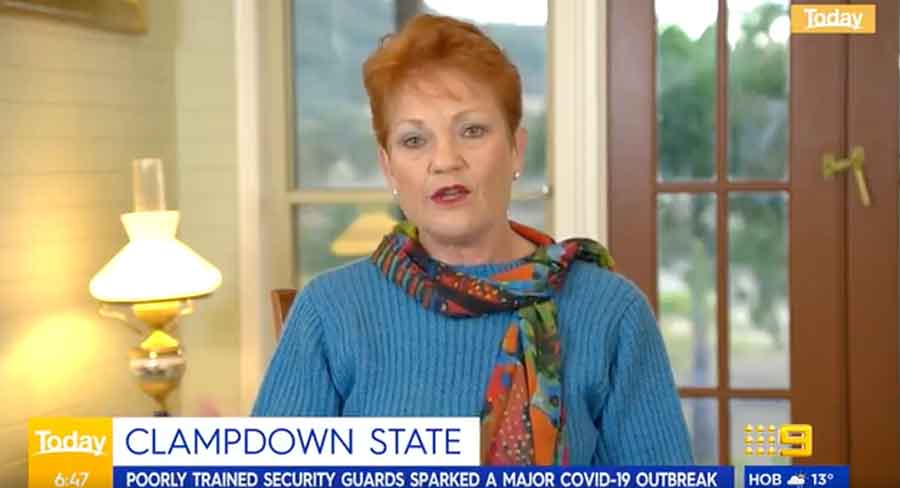 Channel 9 has confirmed that One Nation leader Pauline Hanson will no longer appear on The Today Show after comments made about Melbourne residents trapped inside nine housing commission towers.

Darren Wick, Nine’s director of news and current affairs said of the decision:

“The Today Show has advised Pauline Hanson that she will no longer be appearing on our programme as a regular contributor.

“We don’t shy away from diverse opinions and robust debate on the Today Show. But this morning’s accusations from Pauline Hanson were ill-informed and divisive. At a time of uncertainty in this national and global health crisis, Australians have to be united and supportive of one another. We need to get through this together.”

Pauline Hanson had responded to Co-host Ally Langdon after she discussed whether the residents were receiving adequate meals while in isolation.

“Ah come on Ally, we’ve seen food being delivered there,” she replied. “The fact is a lot of them are drug addicts as well, they are getting their medication, they are alcoholics so they’re being looked after in that way.

“A lot of these people are from non-English speaking back grounds, probably English is their second language who haven’t adhered to the rules of social distancing. They all used a lot of the same laundry,” she said.

You can read more on the Pauline Hanson story here.