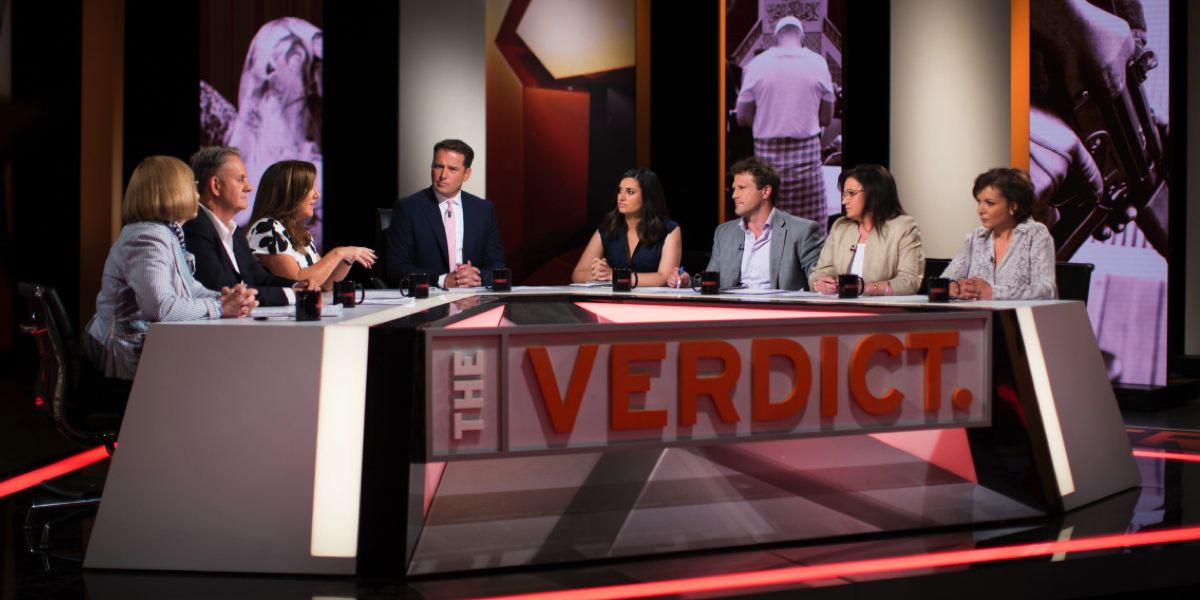 Nine last night launched its new panel show, The Verdict. Was it up to the standard already established by Q and A

Dismissing Nine’s new panel discussion show The Verdict as ‘Q&A for bogans’ is perhaps unfair. Nine has an opportunity with The Verdict to present a robust discussion of contemporary for an audience who are seeking a more passionate and glossy presentation style than the relatively pared down Q&A offers every Monday night. Whether Nine has nailed the format on their first night out is certainly up for debate.

A conversation at the very top of the show seemed to provide almost a mission statement for the show, which was quickly ignored. Segment guest Dr Anne Ally was seen calling out Mark Latham on his views regarding the radicalisation of young people insisting, “we cannot continue to rely on those one-liners that we were using 10 years ago”. What followed for almost the next hour was exactly that – a collection of smash-and-grab one-liners that made for interesting television moments, but failed to sustain strong engagement for a full-hour. It quickly became apparent that The Verdict is Q&A for the morning talkback radio crowd. The battle lines are clearly drawn – where Q&A is to RN’s Fran Kelly, The Verdict is to Alan Jones.

Just as with any morning talkback shows, it didn’t take long to suggest that what the youth need is the introduction of national service. Senator Jaquie Lambie was heard making the call just five minutes into the show.

An interesting point of difference between The Verdict and Q&A is the limited focus on Twitter throughout the program. Where tweets play an active role in the conversation surrounding the Q&A broadcast, Twitter on the Nine show served more as an adjunct to the proceedings. The first tweets were seen on screen almost 14 minutes into the show, during its second segment. The panelists are the absolute focus of the show.

As a host, Karl Stefanovic was amiable and facilitated the conversation to flow reasonably well. An early request to the panelists to stop talking over one another fell on deaf ears repeatedly throughout the hour, particularly when the bombastic Latham was fired up. At times, he overpowered the panel to the point of it feeling less like robust debate and more like verbal thuggery.

The Verdict walks a fine line in that it is clearly inspired by the desire to be involved in the national debate that Q&A routinely spurs on Monday nights, but needs to establish itself with a different voice and a different agenda. It cannot simply be Q&A on a different night. That said, the show needs to embrace some of the things Q&A does right every week and not fall into the traps of Ten’s recent failed panel chat series Can of Worms. Right now The Verdict feels pre-recorded and lacks immediacy. The segments breaking panelists out from the wider panel discussions are even more disruptive to the conversational flow than the ad breaks are to the show – the audience needs to be integrated better into the conversation.

For week one of a panel show, The Verdict was fine. It stumbled and was awkward at times, but with a few weeks on-air the show can fine tune what works for it and what doesn’t as it establishes its own unique voice. Once the kinks in the show are worked out, The Verdict has the potential to be a valued contribution to the national discussion.