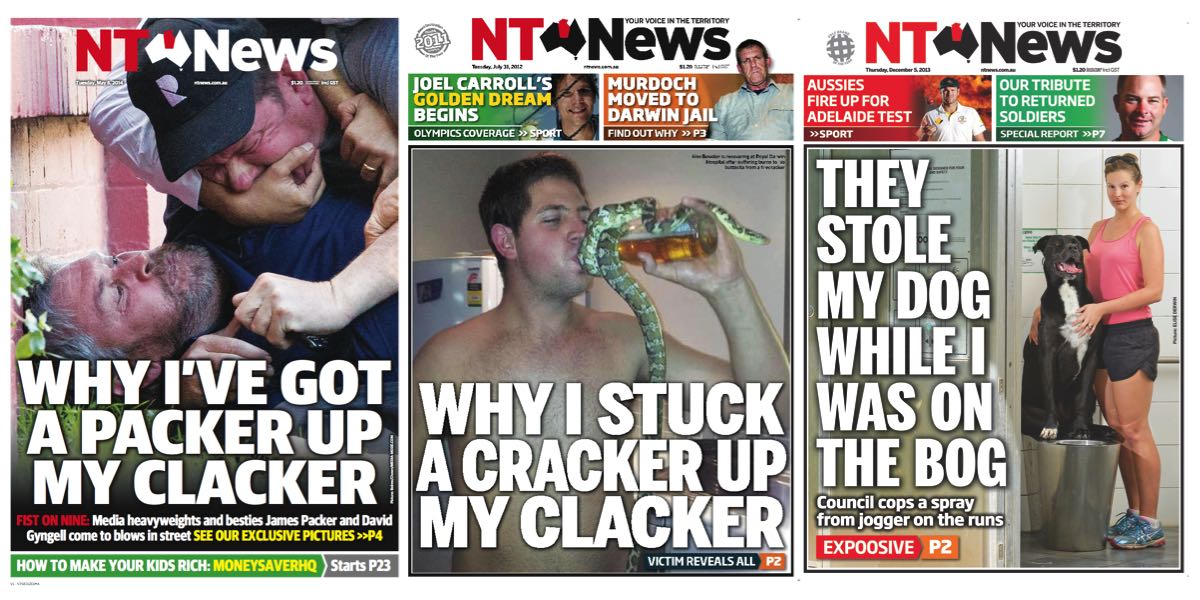 Famous for its unusual stories and wacky headlines, NT News is about having a laugh with the community.

The title’s 2012 front-page story headlined “Why I Stuck A Cracker Up My Clacker” garnered a lot of media attention and won a Walkley Award. The story, accompanied with a photo of then 23-year-old Alex Bowden drinking a beer with a snake wrapped around it, was about how he suffered serious burns when friends lit a firecracker in his bum.

Moving up to Darwin from Adelaide to edit the NT News in 2013, editor Rachel Hancock described her first editorial meeting as “very bizarre”.

“There was a very quirky story about a woman who went to the counter at McDonald’s. The guy behind the counter asked her if her breasts were real or fake. So we put that on the front page. When the chief of staff read it out, I was blushing and the rest of the news team was cheering. I think the headline was ‘Not a Happy Meal’,” Hancock told Mediaweek after returning to Darwin from her visit to Sydney.

“It was very different from what would go on the front of The Advertiser.

When she was first pitched the story, Hancock thought, “What do we do with this story? Surely it wouldn’t go on the front.

“Then you quickly learn that those are the types of stories that do really well,” she said. “It didn’t take long to get into the groove and figure out what takes the front page of NT News.” 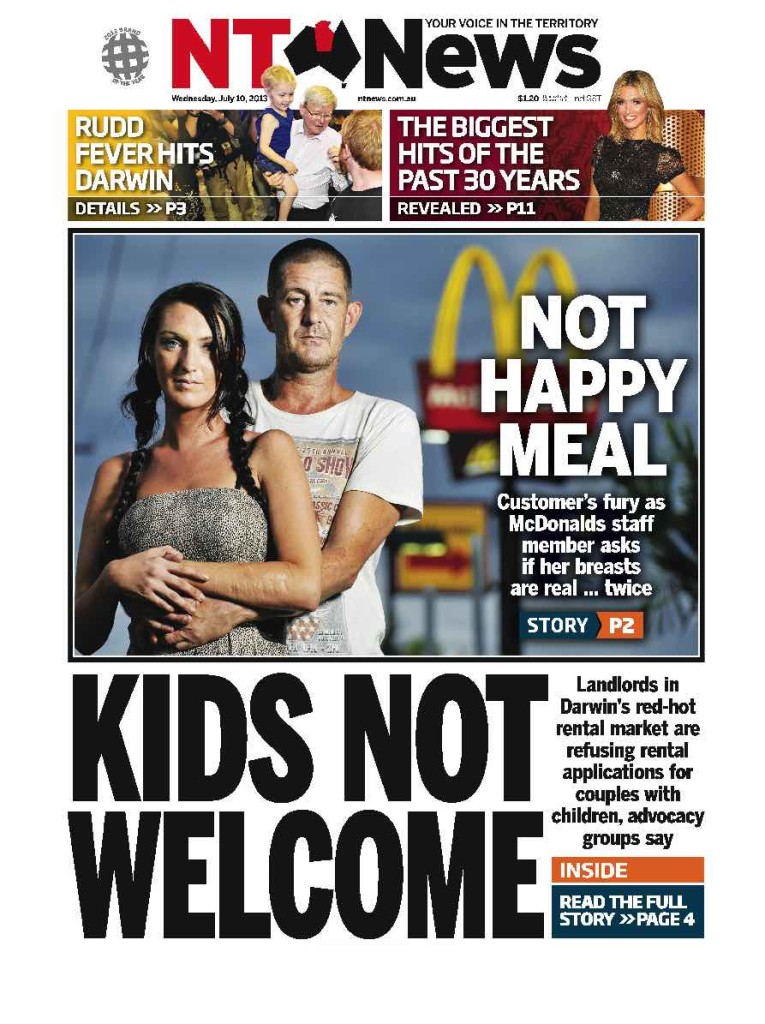 While being famous for its witty headlines and unusual stories, it’s a balancing act, Hancock admitted.

“It’s just about trying to avoid doing it all the time,” she stated. “The biggest misconception is that everyone down south thinks that we do it all the time, because they’ll see the funny covers on the likes of the Today show and Sunrise. When we do have the funny covers they’ll go quite hard on it so no one really sees the serious news that we do.

“We’ve done some really good investigative pieces particularly around the politics of NT.

“It’s not an easy balance.”

The funny stories will only make the front page “once every couple of weeks”, Hancock revealed. “It’s not as frequent as people may think.”

The readers play an integral role when it comes to delivering the quirky stories, Hancock said.

“We have fantastic photographers and we also have a lot of readers send in images. We’ll often have luck with pretty images of a croc, cane toad, and plenty of other creepy creatures and crawlies.”

Last year the News Corp title broke the record for having the most crocodile stories on the front page. The title celebrated the achievement with a special front page dedication and called the issue a “Croctastic edition”. 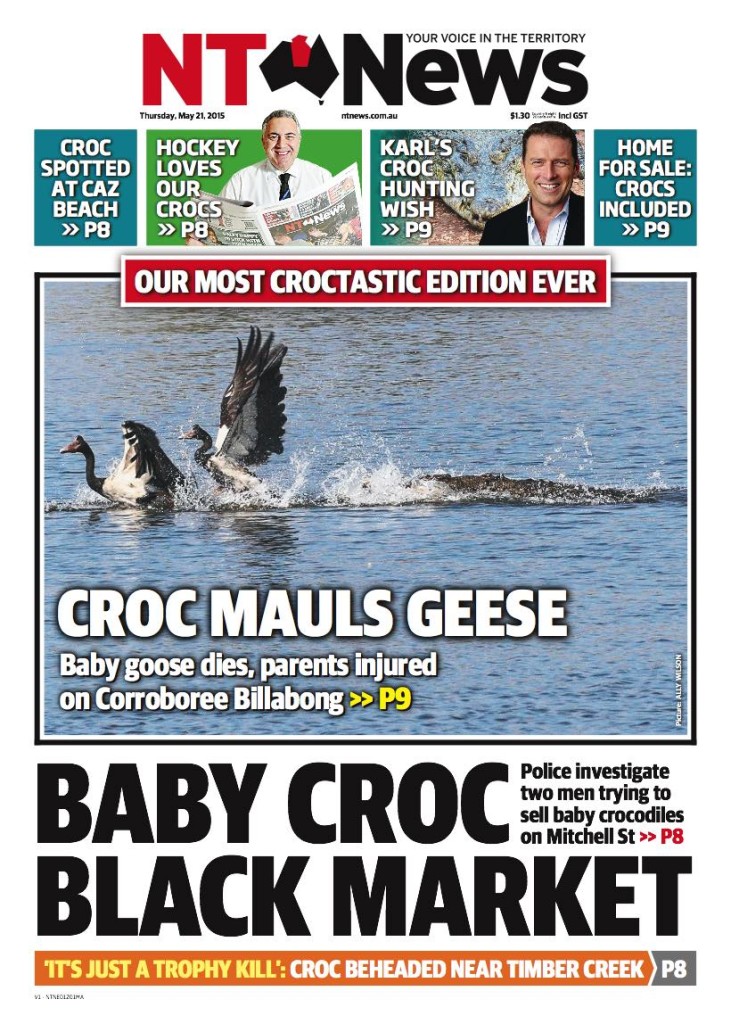 “I don’t think anyone else has tried to beat it. It was nine croc stories on the front,” Hancock recalled.

“I don’t think there is such a thing as croc fatigue in NT. There are more crocs than people apparently. They are everywhere,” Hancock laughed.

“We just don’t put a croc picture on the front page for the sake of it. It’s got to be a good picture and a good story that goes with it. There are a lot of people that forget about how dangerous crocs are. We tend to do a lot of those stories more as an awareness thing.”

Speaking about how staff changes at the paper impact on the tone of the title, Hancock said: “I had a couple of reporters who had really keen eyes for the unusual stories. I did notice when they moved on it was hard to find people willing to take a risk on those sorts of stories so I did notice a change in tone there. But then it’s up to the news desk to be finding them and pushing them out to reporters.”

With the colourful reputation of the title, do journalists have difficulties establishing serious credentials for themselves when they move to other jobs?

Hancock quickly said no, explaining, “Certainly, the reputation precedes them. I’ve heard from a few that have moved on. The first comment is, ‘Oh! I love that paper. It’s got such wacky front pages.’ There is a real love for it. There is a familiarity with it. That is more important.”

NT News now has more followers on Facebook (over 253,000) than the entire population of the Northern Territory, which was over 244,000 in June 2015 according to the Australian Bureau of Statistics.

“We have one of the strongest newspaper brands in the country,” Hancock summed up.

“The most memorable was “They Stole My Dog While I Was On The Bog”. This woman had gone running with her dog and she had to used the toilet. She tied her dog up to a pole, but because she was in there for longer than 15 minutes the council took the dog away. She came out of the toilet and the dog was missing. The best part was then that she and the dog posed for a photo. It was a massive dog. It sat proudly on the toilet. It was a very well-trained dog!

“It got a lot of coverage at the time.

“Another one that was quite unique for the NT News was the Packer and Gyngell fight. Normally we wouldn’t put a national story on the front unless it’s a massive one. But we knew everyone was doing it so we had to do something really clever. It was a hard one to do. We played on that famous ‘Why I Stuck A Cracker Up My Clacker’ but it was “Why I’ve Got A Packer Up My Clacker”. That got some coverage as well so it was really memorable.”