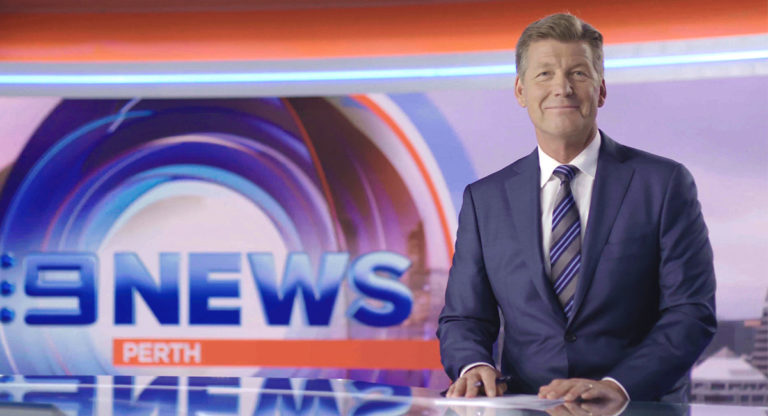 Nine News has changed the presentation style of its 6pm news bulletin in Perth in a bid to be more competitive with rival Seven News. The latter has dominated the timeslot in the market for some time.

Nine recently confirmed the appointment of Michael Thomson as the key presenter for the primetime news hour, replacing Emmy Kubainski and Tim McMillan. The bulletin has had two hosts in recent times, so the change to a single presenter is something that will take time for the viewers to get used to, Thomson told Mediaweek.

“The change is exciting, but it is a challenge – I am excited for it. The other Nine presenters in Melbourne and Sydney say they like it because they can get into a nice groove and rhythm.

“We will have to wait and see about how the audience will react.”

ABC and Ten both have single newsreaders for their primetime news bulletins in Perth. Meanwhile, the commercial market leader for the 6pm timeslot, Seven, has two newsreaders.

There is a pressure to win over more viewers for Nine’s evening bulletin from its competitors, Thomson acknowledged.

“There is no doubt that it is a tough challenge. Channel 7 has been dominant in the 6pm slot for sometime. It is a difficult assignment. From my experience and from speaking to people, I feel that I am qualified to have a go and really make it work.

“We do get some big audiences on some nights, but we need to do it consistently.”

Thomson has been with Nine for about three decades. He started with the organisation as crime reporter before focusing on sports. The experienced journalist was most recently the sports presenter on the 6pm news.

“I have been presenting for a long time. There is a difference between presenting sports and general news,” he said. “The content is very different.”

The 6pm news bulletin is one hour long in Perth. “So we cover a lot of ground,” Thomson said. “It’s important to have a good background about the story you are reading. In case something happens, you need to be on your feet and talk your way through it.

“News is a constantly evolving thing, it changes every day.”

Thomson has been in the media industry for nearly 40 years. He started his career in journalism in newspapers at The Daily News. He was in print media for seven years.

“When I started in 1980 there were six newspapers in Perth. This should give you an idea of how much things have changed,” Thomson said.

The West Australian capital currently has one daily newspaper, which is printed by Rupert Murdoch’s News Corp Australia.

“I am a journalist first,” Thomson said, looking back at his days of chasing news stories. However, he acknowledged that there won’t be much of that any more with his new presenter role. “I will still be chasing some news stories, but will mostly be doing more features and interviews.”

However, he said, this is something that he will enjoy and with such a long career in the industry, “It’s time that this happened”.

After days of rehearsals last week, Thomson will commence in his new role as the presenter of Nine News Perth at 6pm tonight.