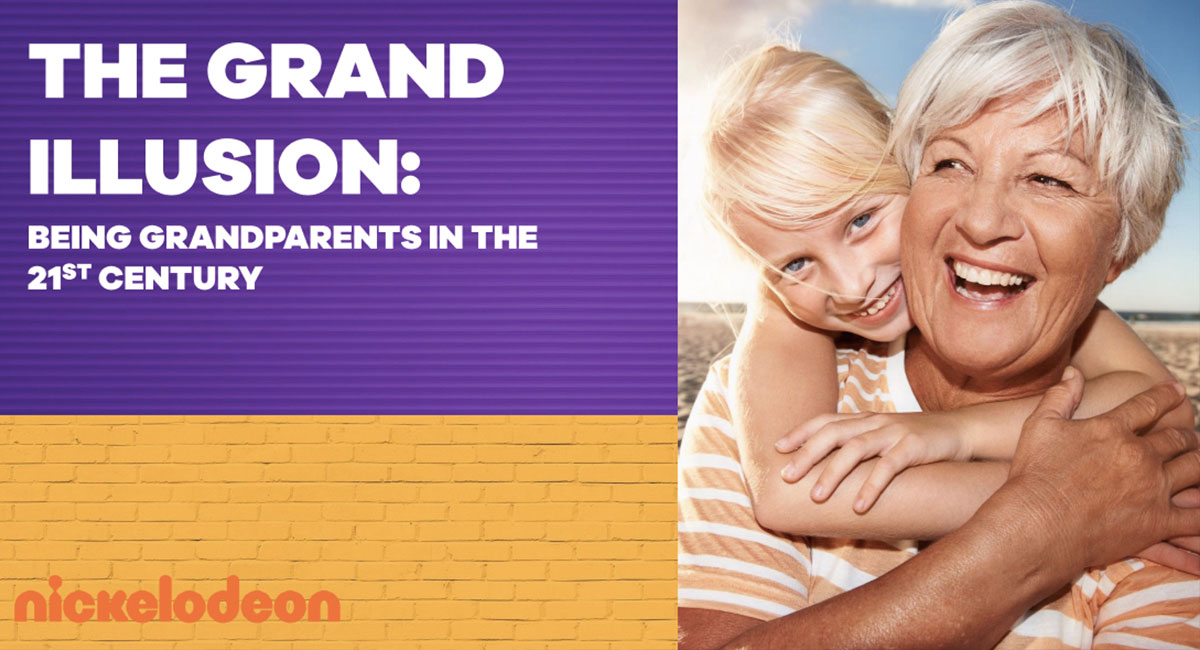 Nickelodeon Australia, a division of Viacom International Media Networks (VIMN), has unveiled the results of The Grand Illusion: Being Grandparents in the 21st Century, a new study exploring the expanding role grandparents play in today’s family.

With multi-generational households on the rise and the growing costs of childcare leading to more than 800,000 grandparents providing care for their grandchildren each week, Nickelodeon conducted a local quantitative study amongst 1,000 Australian 55- to 75-year-old grandparents with grandchildren aged 0-17 in April 2018.

The study shows that 88% of grandparents say family is their number one priority and overwhelmingly agree it’s important to provide support and guidance, pass down family and cultural traditions, and teach their grandchildren life skills. However, the support they provide comes at a cost. Of those surveyed, 88% say they enjoy being a grandparent and 42% say they enjoy being a grandparent more than they did being a parent. Of those caregiving on a regular basis, 71% say they are playing a larger role than their own grandparents did with them, they have a closer relationship with their grandchildren as a result, and agree that helping out is part of their role within the family. Eighty-two percent of Australian grandparents cite “doing fun things together” as the most important part of their role.

Children are well looked after by their grandparents, with 85% indicating that they give their full attention to their grandchildren when they are playing with them. The activities they do together vary depending upon the ages of the children and those with younger grandchildren are more likely to go on walks, play games or read. Pre-teens tend to talk, watch TV or go to shows or special events with their grandparents, while those with teenage grandchildren cited outings such as the cinema, music events, galleries or the beach as common activities.

Despite almost four in 10 having had disagreements or raised concerns regarding their grandchildren with their own children, two-thirds of grandparents surveyed think parenting has changed dramatically since they had children and almost half feel that expectation on parents is too high. Nearly 60% believe their grandchildren have so many more opportunities than their parents, but 57% say kids are under more stress than they should be. More than 60% of grandparents think kids are growing up with fewer rules and less discipline, and more than half feel kids are too protected. Perhaps unsurprisingly, 65% say that kids today are too spoiled but over half admit that they spoil their grandchildren themselves.

Overall, almost 80% of grandparents think they are doing a good job while more than a quarter say it is harder than they thought it would be. Over 80% also say being a grandparent has changed their lifestyle, a statistic that jumps to 90% amongst regular caregivers. More than half of those who provide regular care say that looking after their grandchildren can be physically demanding, and a third said it affected the time they have for themselves.

“Grandparents take their role and responsibilities in the family very seriously, particularly as more and more are caring for their grandchildren on a regular basis,” said Kirsty Bloore, vice president of research for Asia Pacific at Viacom International Media Networks. “This is resulting in stronger bonds between grandparents and grandchildren, but it also has an impact on grandparents’ time and money. Ultimately, the reward is more time spent together and, perhaps, the permission to indulge and spoil their grandkids.”