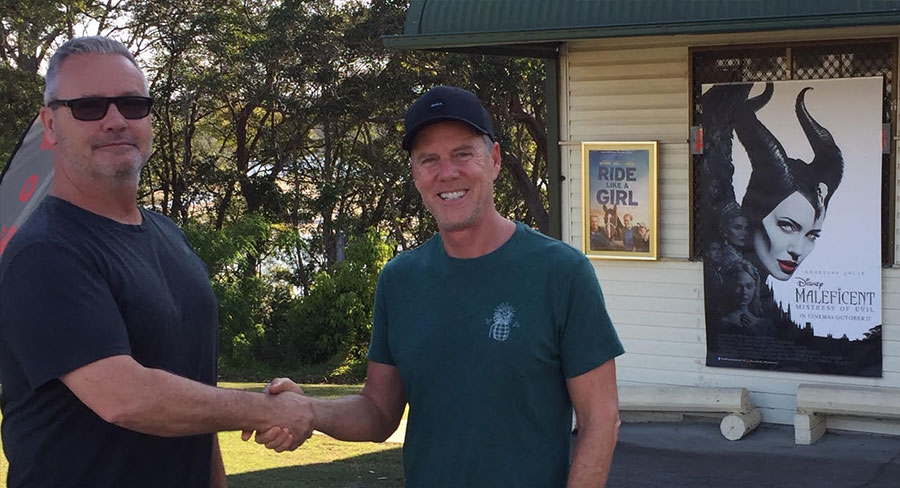 “What exciting times ahead for the Farrar family!”

Situated halfway between Sydney and Brisbane on the Mid North Coast, this historic beachside cinema has been Mercado’s home for the past two and a half years, but now he is handing over the reigns to Farrar.

Details of the transaction were not revealed.

“I am thrilled to have sold The Roxy to a work colleague I have known and admired for over 20 years,” said Mercado, who also worked with Farrar at Foxtel. “Garry has exciting plans to take it to the next level – and they might even bring me back for special guest appearances.”

“What exciting times ahead for the Farrar family!” said Farrar. “My passion for old cinema started years ago while consulting to Brian Walsh at Foxtel, and launching the new seasons of A Place to Call Home in an array of majestic old cinemas around Australia. I have been coming up to South West Rocks with Queenscliff Surf Club for many years, so to be able to combine my love of the ocean with my this beautiful cinema is a dream.”

South West Roxy is the longest running cinema in the region, screening movies continuously for nearly a hundred years. The country hall first began thanks to a visiting “picture show man” with needed to borrow a (noisy) generator to screen silent movies. Today it retains its old school charm, but is air-conditioned and shows the latest blockbusters in Digital 3D.

“While holidaymakers and tourists are great, this cinema is still pumping due to support from the wonderful locals,” Mercado said. “We have many regulars, often retirees, who come to the movies every week. And there is also a brand new generation of younger moviegoers coming up through the ranks – seeing little kids perched atop bean bags to watch their first ever movie on a big screen never gets old – I will miss that.”

Mercado is coy about his next move, insisting he is “open to offers” but we smell another reinvention coming. “I’ve worked in tourism, television and cinema, so there must be at least one more medium I can conquer,” he laughed.

Recently Farrar has worked as a consultant at Mediaweek in addition to a number of consultancies in the media and events space.

In the past he worked in marketing and PR at Seven Sydney. He was later one if the senior consultants at Brian Walsh’s The Promotions Department and also worked with Walsh at Network 10 and later Foxtel.

Farrar has taken over the cinema at a busy time – school holidays. He has been hands-on his first few days before sharing the workload with staff. He was at work early this morning setting up for six sessions today.