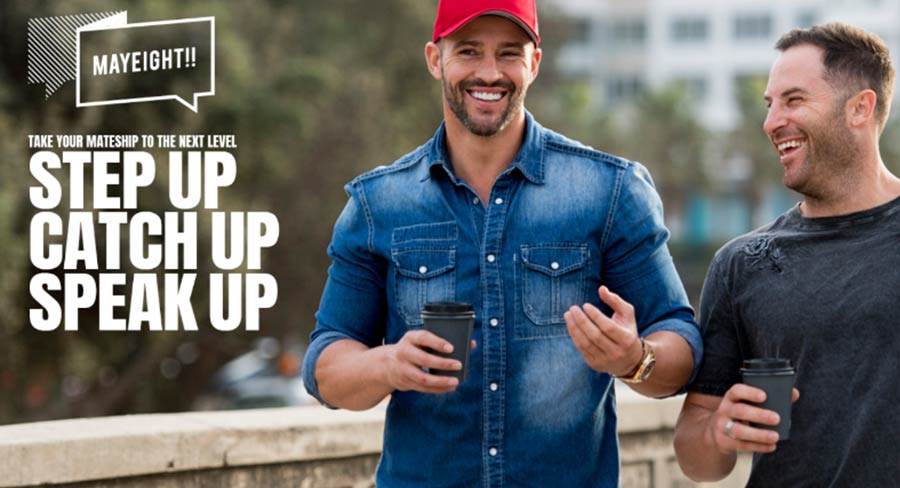 • Encouraging blokes to take part in an official day of mateship on Wednesday May 8, Movember’s MAYEIGHT!!

One in five 18-24 year-old men wouldn’t have anyone to turn to if they were going through a tough time, according to new research from leading men’s health charity, the Movember Foundation.

The study, which coincides with the launch of the Movember Foundation’s fourth annual MAYEIGHT!! campaign, also revealed around half of the 500 men surveyed wanted to spend more time with their current mates, while one third said they hadn’t made any new close mates in the past two years.

A graffiti mural of the much-loved comedy duo, Hamish Blake and Andy Lee, has sprung up overnight in Melbourne’s iconic Hosier Lane in celebration of MAYEIGHT!! 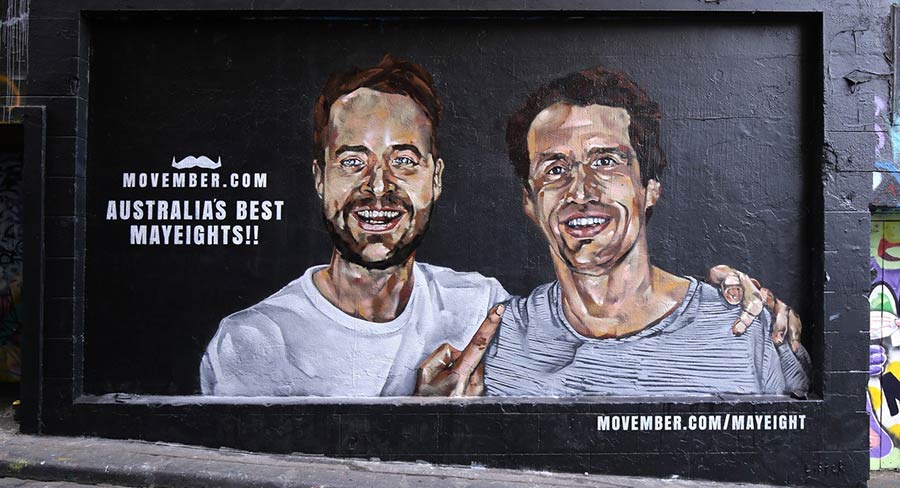 The artwork – which was created by street artist Ling (@lingerid) and took 17 hours to complete – was commissioned by men’s health charity the Movember Foundation to celebrate the launch of the fourth annual MAYEIGHT!! (May 8, maaaate) campaign.

Brendan Maher, Global Director of Mental Health & Suicide Prevention at the Movember Foundation said: “It’s not just older men who are at risk of becoming socially isolated or lonely. Even young men – who on the surface may appear to be more connected – can struggle to maintain relationships with their mates.”

By encouraging blokes to take part in an official day of mateship on Wednesday May 8, Movember’s MAYEIGHT!! campaign aims to tackle social isolation and improve mental health among Aussie men.

Originally the brainchild of Melbourne-based agency Cummins&Partners, this is the fourth year Movember has run MAYEIGHT!! This year the campaign feature celebrity best mates Kris Smith and Sasha Mielczarek in the creative urging guys to take their mateship to the next level, with the tagline Step Up. Catch Up. Speak Up.

The new study also highlighted that men most needed the support of their mates while going through a mental or physical health issue (27%). This was followed by major life changes like the breakdown of a relationship (21%), losing a loved one (9%), losing their job (8%) or becoming a dad (6%). Men aged 25-44 were most likely to need support from their mates during a breakup.

“Pressure points in men’s lives can have a flow-on effect to their social lives. This can include big changes like going through a breakup or becoming a dad, where you shoulder more family responsibilities and have less time for your mates,” Maher said.

“Going through these changes can be tough for guys, particularly as they tend to bond and connect over shared experiences and activities such as watching a sports match or going to a gig.

“Making time for these ‘shoulder to shoulder’ activities is crucial, not just on May 8 but year-round. Taking part in an activity with a mate, rather than a ‘face to face’ catch up allows guys to feel more comfortable, meaning they’re more likely to open up and have a meaningful conversation.”

• Step up – Reach out to your mates. There’s probably one who needs you
• Catch up – Get together. There’s no time like the most Aussie day of the year
• Speak up – Sense something’s up? Now’s your chance to let them know you’re there