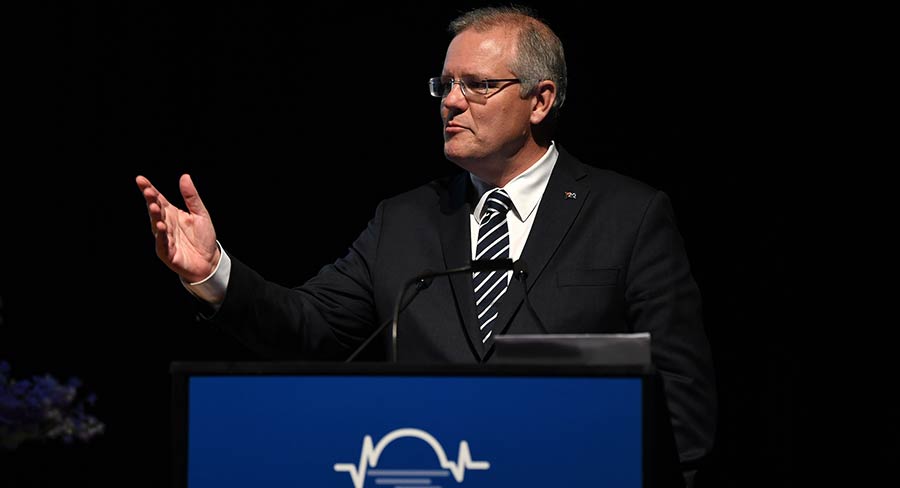 Australians are spending less time talking on their mobile phones and downloading substantially more data than they were even a year ago, the ACCC’s Communications Market Report for 2018-19 has found.

The rapid take-up of streaming services such as Netflix, Stan, Optus Sport and Kayo Sports contributed to a 47 per cent jump in data downloads over the year, with fixed broadband services accounting for 88 per cent of all data downloaded.

The report shows how Australians’ communication methods are changing, as minutes spent using traditional voice services on mobile phones dropped the first time over the year, reflecting the increasing use of social media and over-the-top services like Facebook Messenger, WhatsApp and Viber.

At the same time, the proportion of Australians who solely rely on mobile services for broadband is declining, dropping from 23 per cent in 2014 to 16 per cent in 2019, according to the Australian Communications and Media Authority (ACMA).

David Einhorn on Netflix “Narrative is finally coming to an end”

The US hedge fund manager David Einhorn, who has long been bearish on Netflix, argues that the company’s domestic subscriber picture will suffer with the wave of new competitors, reports The Hollywood Reporter.

Einhorn, who has long been bearish on Netflix, argues that the company’s domestic subscriber picture will suffer with the wave of new competitors from big entertainment companies, while the international expansion will be hurt by lower prices in developing countries.

“It appears to us that new subscriptions are slowing and cancellations are accelerating,” Einhorn wrote. “Competition is denting the Netflix domestic story, just as the platform loses its two most popular shows, Friends (in 2020) and The Office (in 2021), forcing management to spend aggressively to create and market binge-and-forget Netflix Originals and stand-up comedy specials, which lack staying power.”

The Australian Financial Review is the only traditional news masthead to increase both its print and digital readership over the past year as it makes further audience gains on its national rival, reports the Nine-owned nosiness newsbrand.

Australia’s first national newspaper increased its total monthly audience by 8 per cent, or 209,000, to 2.68 million readers over the year to October, according to the latest Enhanced Media Metrics Australia report.

In contrast to the Financial Review‘s audience gains, overall print and digital readership of national rival The Australian fell by 8 per cent in the year to October, according to the EMMA report.

Financial Review editor in chief Michael Stutchbury said the masthead’s readership growth was particularly pleasing for a business, finance and political publication that operated behind a premium online paywall.

Meanwhile News Corp’s national daily last week reported audience for The Australian is rapidly growing, with the national newspaper recording a dramatic 16.5 per cent lift in digital readers over the past 12 months.

The result is the second successive month The Australian has recorded an audience above 2 million.

Harry and Meghan threaten to sue over Canada paparazzi shot

Prince Harry and Meghan Markle have fired a warning shot at the world’s press in a salvo designed to discourage paparazzi from strangling their new life in Canada, reports The Sydney Morning Herald’s Bevan Shields.

Lawyers for the pair sent legal warnings to media outlets on Tuesday following the overnight publication of a photograph of Meghan taking eight-month-old son Archie for a hike in a public park on Vancouver Island.

The image highlights what the couple will be up against outside the protection of a ‘gentleman’s agreement’ in Britain – struck following the death of Princess Diana – that severely limits the ability for paparazzi to sell their work to newspaper editors.

Their UK legal team has claimed the image was obtained without the consent of the Duchess of Sussex and that the photographer was hiding in bushes when it was taken.

Scott Morrison’s mastery of TV means something has to change

Scott Morrison finishes every interview with a hearty “thank you”, usually addressed to the interviewer, writes The Age’s Craig Mathieson.

“Thanks a lot, Leila, it was good to be with you,” the Prime Minister will say, or “Thanks very much, Michael.” It’s a personalised touch that also serves as a sign of strength: the interview has gone well and Morrison wants to show that he’s the magnanimous victor.

Television audiences, who’ve been following the Prime Minister’s recent appearances with urgent interest amid the bushfire crisis, are often not nearly as grateful.

The media’s commentary on the Prime Minister has been good, but trying to turn it into queries he’ll simply never consider is failing. It also narrows the scope of interviews: it was frustrating to watch the question of Australia’s response to climate change being reduced to emissions targets from the Kyoto agreement, for which the Prime Minister had a set answer.

Brisbane radio presenter Ash Bradnam walked out of a nightclub when he feared his sobriety was being tested, reports News Corp’s Amy Price.

The Nova 106.9 breakfast show host, who is four years sober after a debilitating and public battle with alcohol addiction, opened up about overcoming a “big moment” surrounded by partygoers during his first visit to a nightclub in a decade.

Discussing the night on Ash, Kip, Luttsy & Susie on Tuesday morning, Bradnam explained he had taken his wife Jodie and their three boys – Levi, 16, Sid, 14, and Archie, 7 – to an all-ages Hilltop Hoods concert, which was held at a nightclub in Hawaii, over the holiday break.

I’m A Celeb: Why Nova’s Fitzy rejected offer to enter the jungle

An Aussie radio star has revealed why he rejected an offer to appear on this season of I’m A Celebrity … Get Me Out Of Here!

Fitzy, from Nova’s Fitzy and Wippa, told listeners Tuesday morning that he not only turned down an approach from the reality show’s producers but that he also suggested who they should call instead.

“I got a phone call saying, ‘Do you want to do the jungle?’” Fitzy said on Nova. “We (himself and co-host Wippa) get this every year.

Fitzy said that as soon as he got off the phone, he thought of a celebrity who would be “perfect” for the show and who had “a bit of time up his sleeve”.

“The ratings are bouncing around everywhere, it’s all over the place,’’ he said.

“At the start of the year we were clearly no.1.

“If you know that your show is good then you’re a chance. We don’t worry about that. I’ve been around too long, I’ve seen it all a thousand times.

“Melbourne is a very competitive market. It’s hard to say (this), because people think it’s a cop out, but you are going for specific demographics. For 25-54 (year-old) males that’s exactly what we’re going for, we’re no. 1 by a mile.”

And she says the move has nothing to do with her taking time off for exhaustion last year.

“It is completely unrelated,” Anasta told Confidential. “At the moment I am feeling happier, healthier and better than ever and just excited about change, a fresh new opportunity or discovering something else.”

Anasta, 34, took a three-week break from shooting Neighbours in June 2019, citing exhaustion as the reason for taking time off.

She has split her time between Sydney and Melbourne for the more than three years she has appeared as Elly on Channel 10’s Neighbours as she and ex-partner, Braith Anasta, share custody of their young daughter, Aleeia.