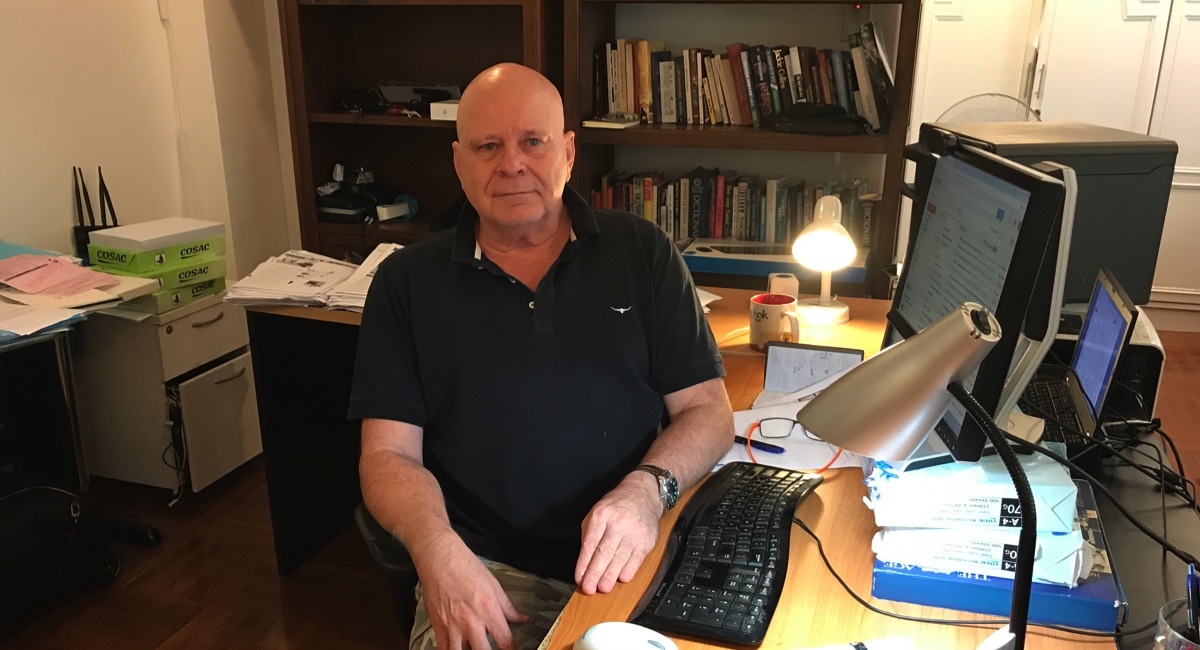 Fairfax’s Bangkok-based veteran print journalist Lindsay Murdoch has vigorously embraced the digital era, even though it means he now works longer hours than ever in what has been more than 44 years continuous service.

“Since joining The Age in 1977 I have never worked as hard as in the past few years,” he says. “The days of spending hours collecting information and then sitting down in the evening to write a story for the next day’s papers are long gone.

“In the new digital age I do video, file to online around the clock, as well as write stories for print in The Age, The Sydney Morning Herald and The Canberra Times.

“Surprisingly I have adapted well to the digital world and video.

“I use an iPhone 7 Plus to record interviews and take video relevant to my stories. I send the video to producers at Fairfax. They will sometimes add wire service video overlay with me doing a piece to camera or voice-over.

“On big breaking stories I hire a photographer/video person. Most photographers now also take videos and edit them.”

But Murdoch adds going digital has brought a big bonus: “The digital reach of Fairfax means that my stories are now read by hundreds of thousands more people compared to a decade ago when they only appeared in the newspapers.”

As a Victorian country boy aged 17, the young Murdoch left Warragul Technical School to work as a bank teller – but on the way to the bank, fate interceded.

His council-worker father George was a friend of Tony Pettit, the owner and editor of the Warragul Guardian, who was looking for a cadet journalist.

Dad put in a good word for his son and Lindsay takes up the narrative. “The Monday morning I was due to begin work as a teller I went instead to see Mr Pettit, who was sitting behind a desk piled high with council notice papers, which he tore into strips and wrote his copy on.”

Pettit gave Murdoch the job, and he worked for two years in Warragul before moving to a startup newspaper, The West Gippslander, which was then taken over by David Syme, then the group publisher of, among many other things, The Age.

From his 1977 start at The Age as police roundsman he graduated to chief police reporter and in 1984 co-authored “The Age Tapes”, which published material from tape recordings of telephone calls allegedly made without authority by the NSW police and which kicked off the Lionel Murphy affair.

In the mid-1980s he became chief of staff for The Age for two years and was then sent to the UK to do a journalism course at Regent’s College London.

Murdoch says, “When I returned to the paper my driving ambition was to be a foreign correspondent and I saw that the best way to do that was to kick goals writing and reporting.”

He got his wish in 1989, when then Age editor Creighton Burns gave Murdoch his first foreign posting, basing him in Singapore, assigned to report on 13 countries.

Murdoch was told that the deal was that, “I could go anywhere and do any stories in 13 countries that were then designated my beat, but if at any point he thought I was not where I should be, or on the right stories, he would bring me home. I backed myself.”

In August 2011, he was appointed South-East Asia correspondent, based in Bangkok, where he still lives today.

His work exploits, his stories and exclusives, and his numerous awards could, as they say, fill a book and hopefully will one day.

His long career is probably best summed in thumbnail bio fashion by The Sydney Morning Herald, which says, “Lindsay Murdoch is a three-time winner of the Walkley Award, Australia’s top award for journalistic excellence. Lindsay is a former correspondent based in Singapore, Jakarta and Darwin. In 1999 he covered the tumultuous events in East Timor, and in 2003 he covered the Iraq war while embedded with US Marines.”

And then of course he’s also had to live with the surname, Murdoch.  “Often the first question people ask me when I introduce myself as a journalist is whether I am related to the Rupert Murdoch,” he says, “I usually reply ‘Sadly, no, or else I would be based in Paris with a nice credit card.’”

But one news article did note that when Murdoch’s visa difficulties led to concern over the future of Indonesia’s press in 2002, he was sharing his Jakarta villa with a “contentedly chirping” black and yellow parrot named Rupert.

A shorter version of this article appeared in Peter Olszewski’s Mediaweek Asia column, which is published fortnightly in the Mediaweek Morning Report.