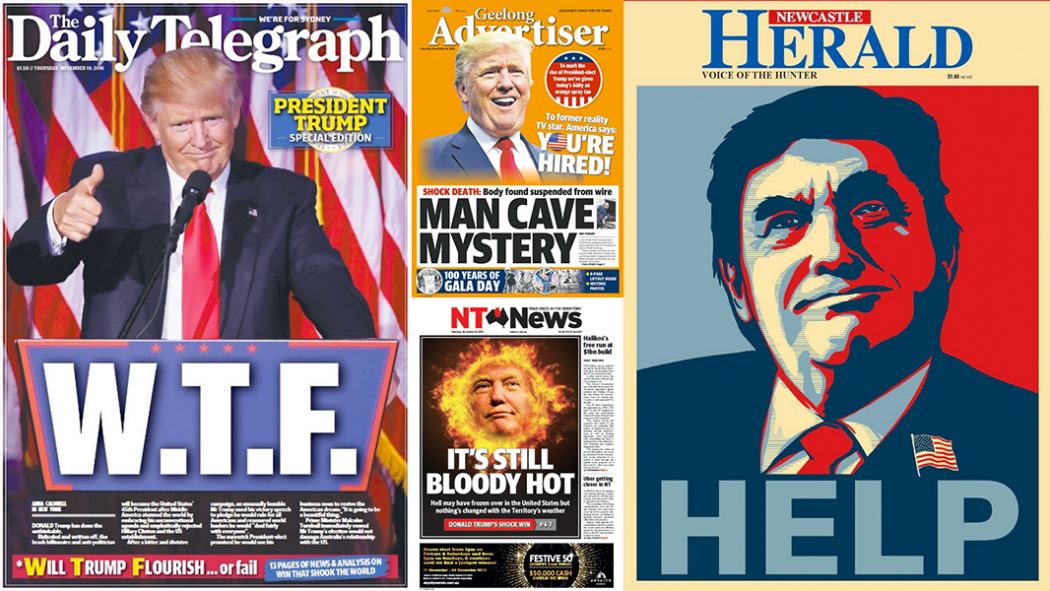 Trumped: Media coming to grips why so many of them got it so wrong in US election

As we wake up to news of the election of Donald Trump, the media is coming to grips with why so many of them got it so wrong.

ABC Breakfast presenter Vir­ginia Trioli has been caught live on air saying Donald Trump supporters should be “subjected to an IQ test” and that Trump must have been looking at his wife’s breasts while voting, reports The Australian’s Sam Buckingham-Jones.

On the live web feed of the ABC’s News 24 US election special yesterday morning, pictures of the then presidential candidate staring at his wife’s ballot paper as she voted in Manhattan were widely circulated.

It is understood Trioli believed the microphones had been switched off after a cross to a promotional message when she speculated Trump was “looking at (Melania Trump’s) tits”.

Trioli was then heard saying Twitter users who were public Trump supporters “should be subjected to an IQ test” before voting, while a member of the crew could be seen removing glasses of water from her desk.

Debate about the role the media played in the US election was featured again on Paul Murray Live last night. Host Paul Murray showed a collection of tweets from prominent Australian journalists who expressed dismay about the election of Trump as president and then called them “a pack of arseholes”.

The guests on the panel debating the media’s role included Ross Cameron, Rowan Dean, Mark Latham and Janine Perrett. Also a guest on the show last night was Pauline Hanson who expressed enthusiasm about the latest expression of what she called “people power”.

At the start of his 2GB/3AW show last night Steve Price reminded listeners that he had forecast Donald Trump would be the next president. Although telling listeners he wouldn’t make a big deal of telling them “I told you so”, he made the point to his early evening colleague Andrew Bolt, who predicted a Hillary Clinton victory. Bolt wrote this morning:

Donald Trump’s win is the biggest “f— you” to all his enemies – the media, the politicians and Wall Street. The whole world now – and our own political class – has been given a shock and a warning.

A computer model developed by an academic from a New York university, a right-wing media and political personality, and a fish in India have put the world’s media to shame in correctly predicting the outcome of the US presidential race, reports The Australian’s Sid Maher.

Chris Kenny in The Australian:

Journalists and commentators seem to tell us what they hope for rather than what they observe. Thus, as early results came in at midday yesterday, the ABC’s Barrie Cassidy tweeted: “Trump cannot win. The nightmare is over.”

Media are misreading voters and therefore misleading their audiences.

The exception that proves the rule is leftist filmmaker Michael Moore, who predicted a Trump win because he understood the “rust-belt” grievances and how the Republican candidate was providing “music to people’s ears”. Moore said most media couldn’t see this because they were “stuck in a bubble”. Quite.

Make no mistake. This is an epic fail. And although eating crow is never appealing, we’ll be digesting feathers and beaks in the next weeks and months – and maybe years.

The strange thing, of course, is that the media helped to give Trump his chance.

Did journalists create Trump? Of course not – they don’t have that kind of power. But they helped him tremendously, with huge amounts of early, unfiltered exposure in the months leading up to the Republican primary season.

The fact the media got it so wrong is proof of how incorrigibly out of touch the insider class is.

They got it wrong because they were scared to risk social death by admitting affinity with the “deplorables”.

The media was so busy vilifying Trump they didn’t see what was in front of their faces. The transparent hypocrisy of their mock outrage and sudden prudishness didn’t fool anyone with common sense.

Kyle Sandilands started the Kyle and Jackie O Show this morning with “I told yous”. Sandilands had predicted a Trump victory from the day he accepted the nomination from the Republican Party.

“Freakin’ hell,” said Jackie O, before noting she hoped people would be pleasantly surprised by a Trump presidency. “Many of us are a bit freaked out,” she added.

Sandilands, who is broadcasting from Los Angeles this week, noted how everyone on California supported Clinton, but he noted how the entertainment world was all in a “Hollywood bubble”.

From the day the billionaire businessman launched his candidacy by denigrating a generation of migrants as murderers, rapists and thieves, the mainstream press pack who had dutifully toddled into Trump Tower to take dictation from this brash-talking toupee seemed to drop its bundle.

Triple M’s Hot Breakfast is in the US this week on what now seems like an annual end-of-year visit. The show broadcast from Washington this morning. Hosts Eddie, Mick and Darce watched the results come in yesterday from the Australian Embassy with ambassador Joe Hockey.

The show, which reached as record high rating this week, tried to explain to listeners what happened. McGuire played clips from Michael Moore and then a clip from Peter Finch on Network. McGuire and EP Jay Mueller both stood outside the White House for part of election day to see the reactions of voters.

Just yesterday Jane Kennedy was on the show from Melbourne, wearing a Clinton t-shirt, explaining the significance of America’s first female president.

Nine’s decision to base its star [Karl Stefanovic] in the middle of the action, in a glass set bathed in the bright lights of Manhattan, delivered an insightful and well-paced take on events.

In contrast, Seven put recently poached gun Michael Usher in a studio in Sydney, alongside US bureau chief Mike Amor who’s been in town since last month.

Infrequent crosses to reporters in New York and Washington DC made it feel like Seven was watching an event unfold from outside with their noses pressed to the window.

The US presidential election delivered The Guardian its biggest day in unique browsers. The news outlet had 23 million UBs on the day, beating its previous best of 17.2 million, which was recorded during Brexit. The record influx of readers also resulted in the highest volume of member sign-ups in a single day to date.

Trump front pages from around Australia 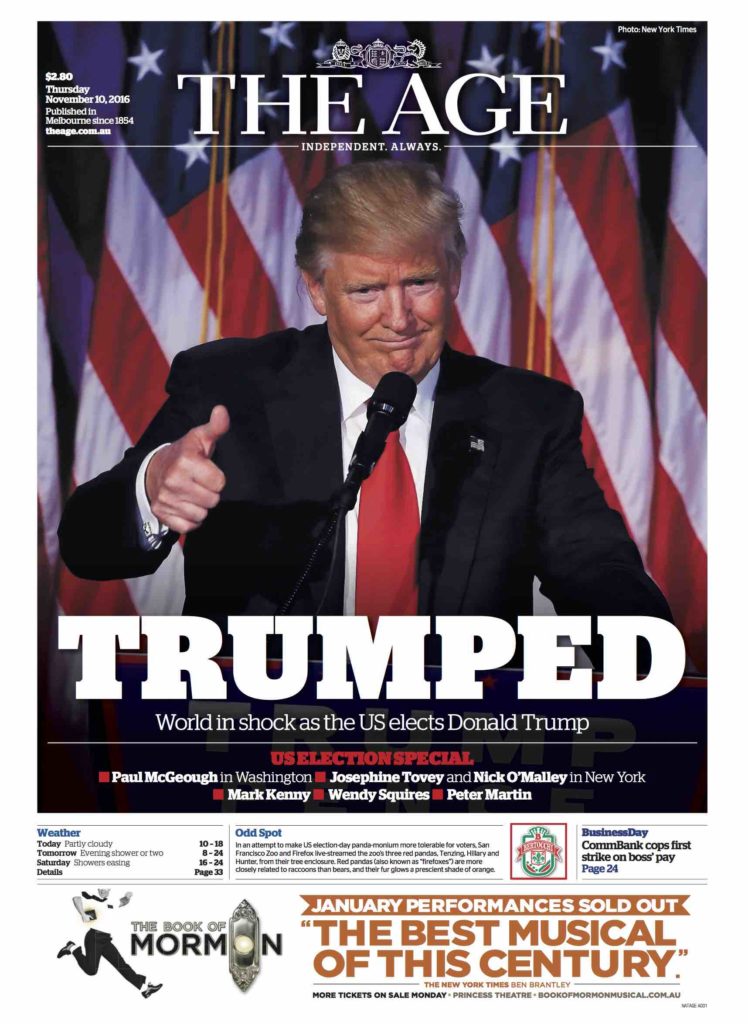 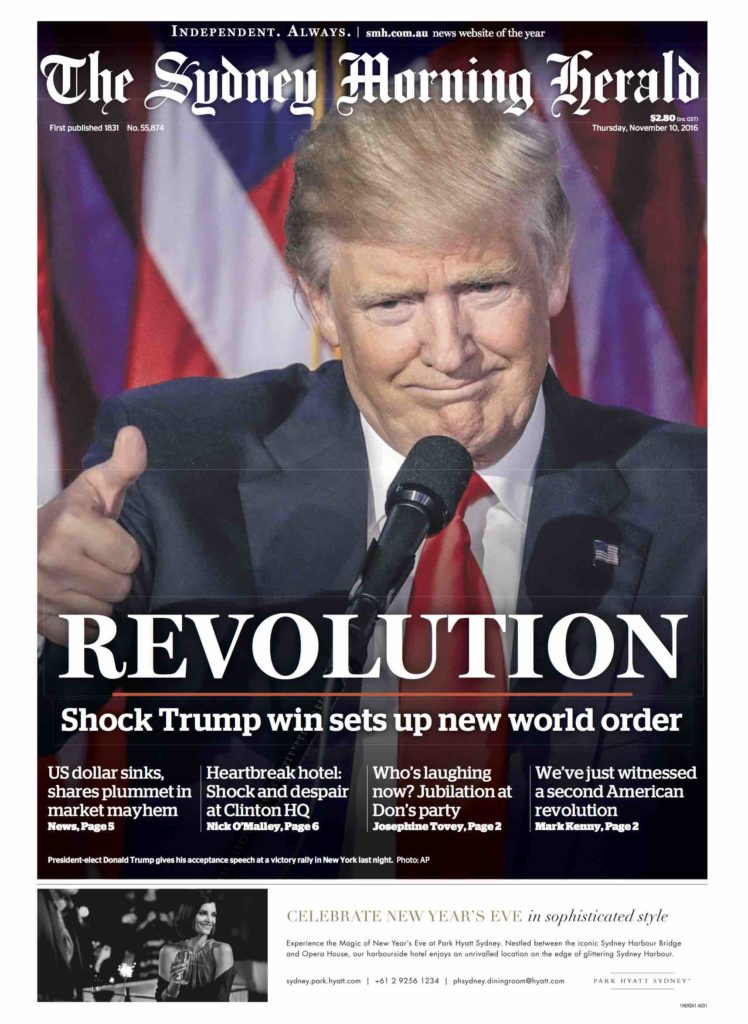 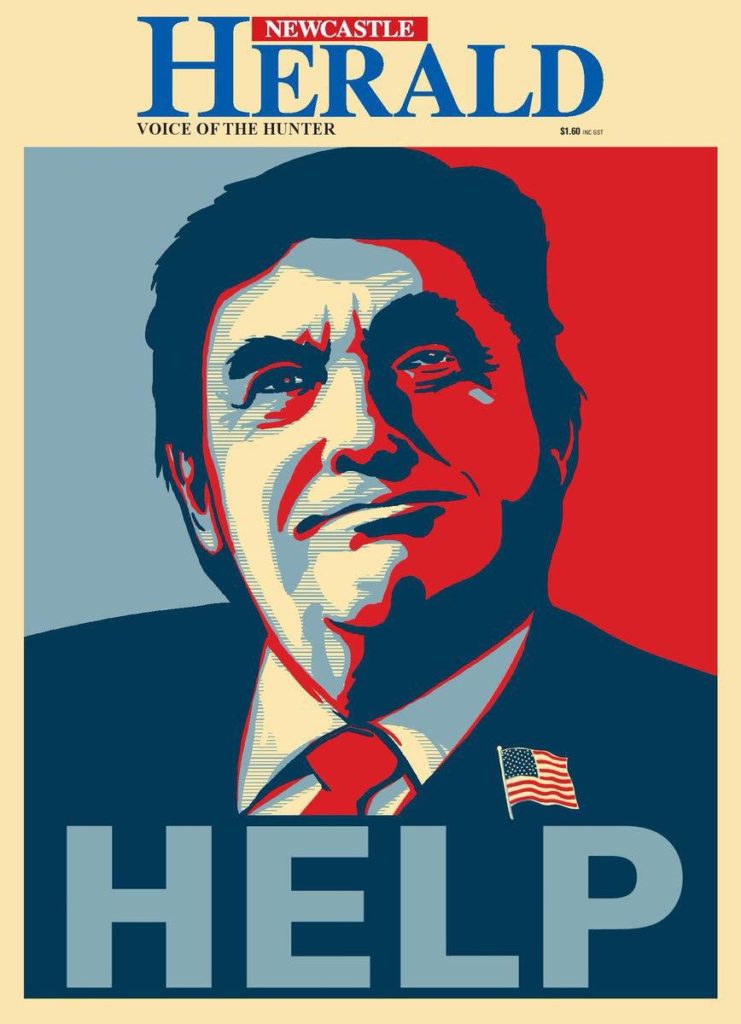 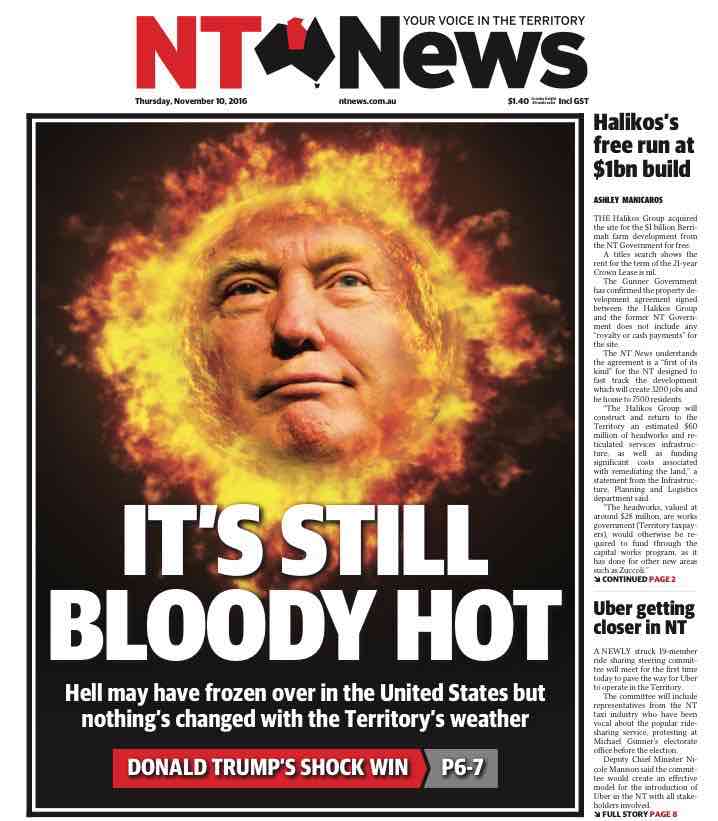 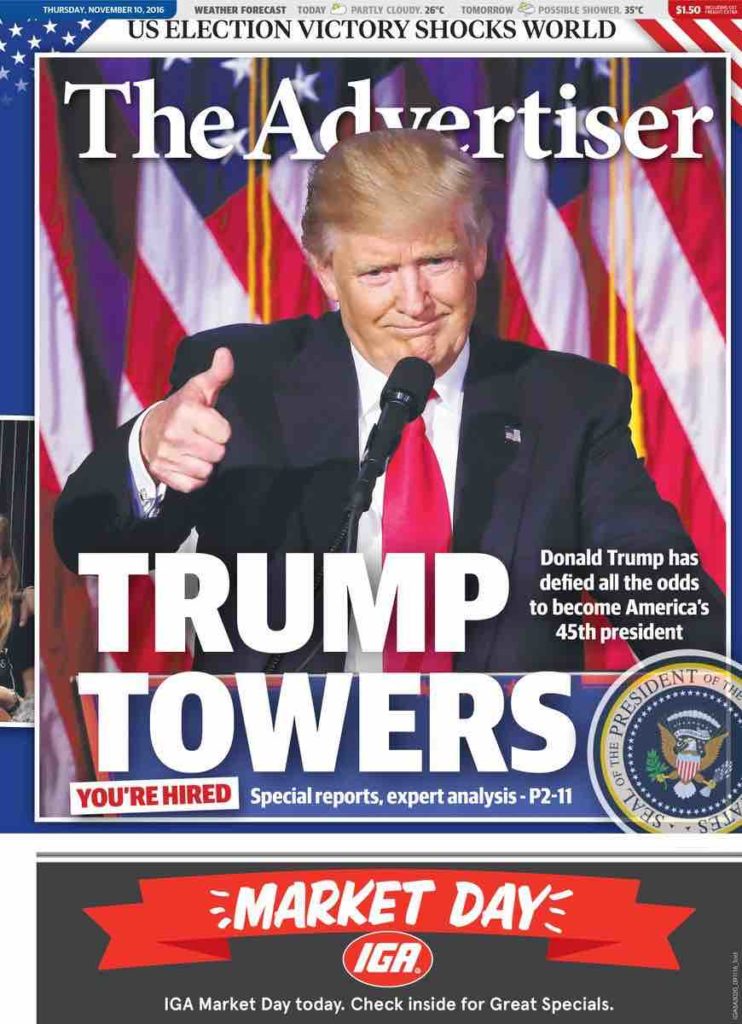 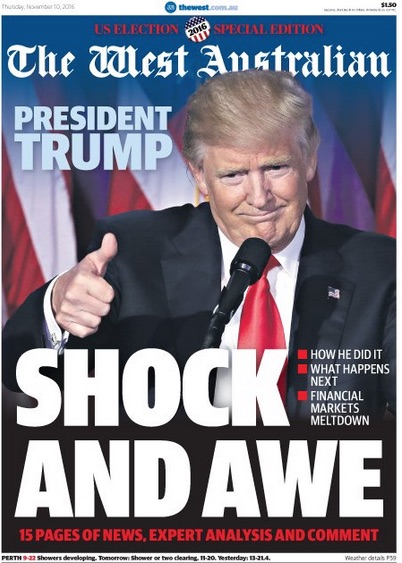 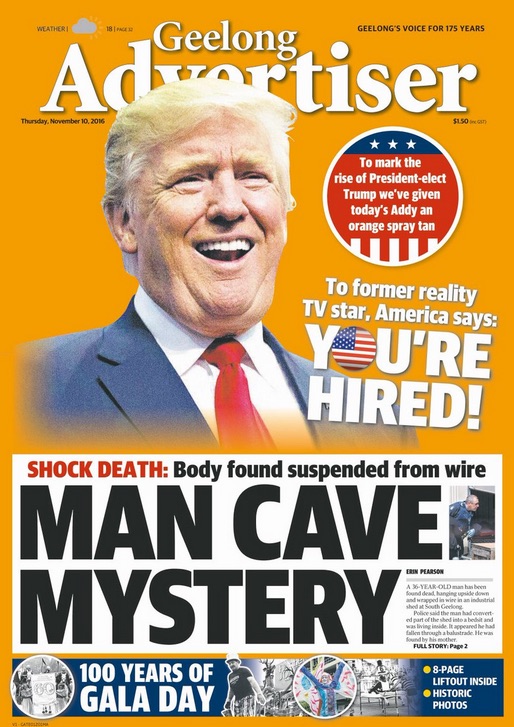 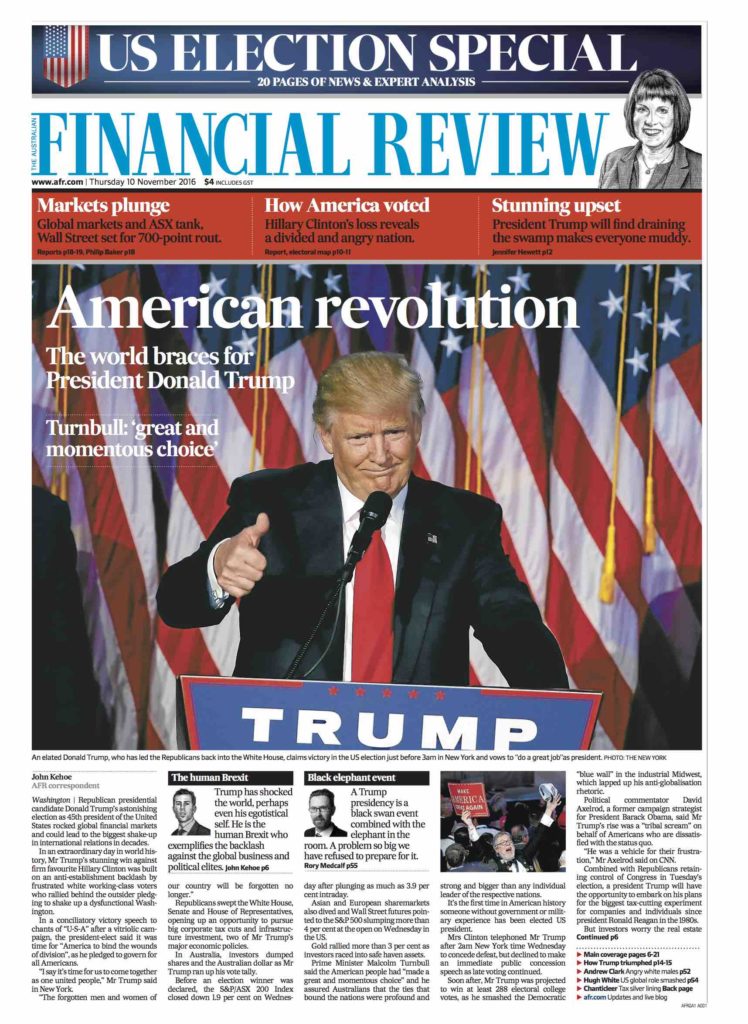 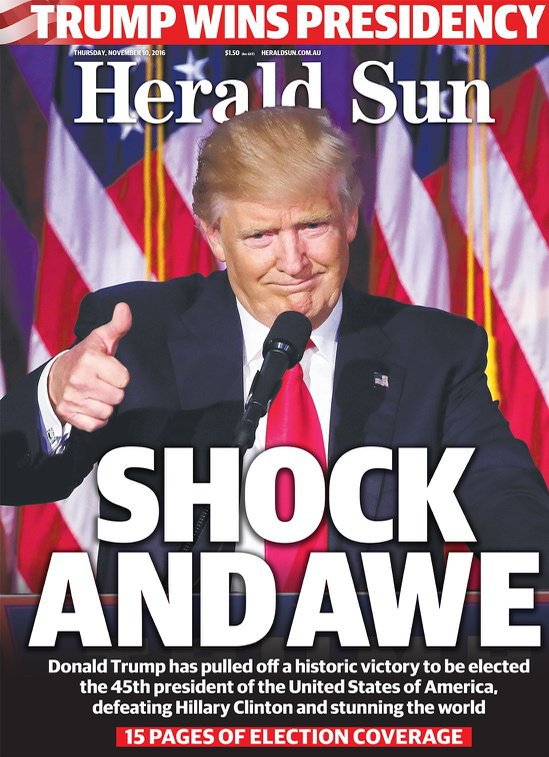 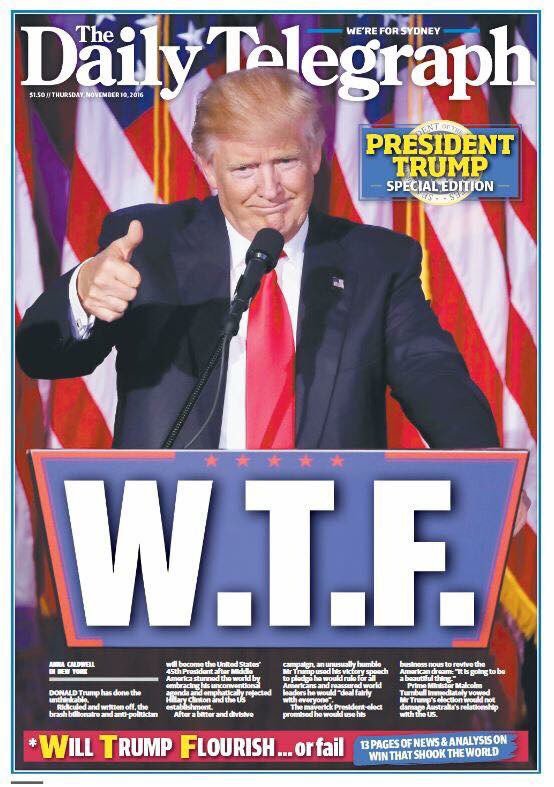 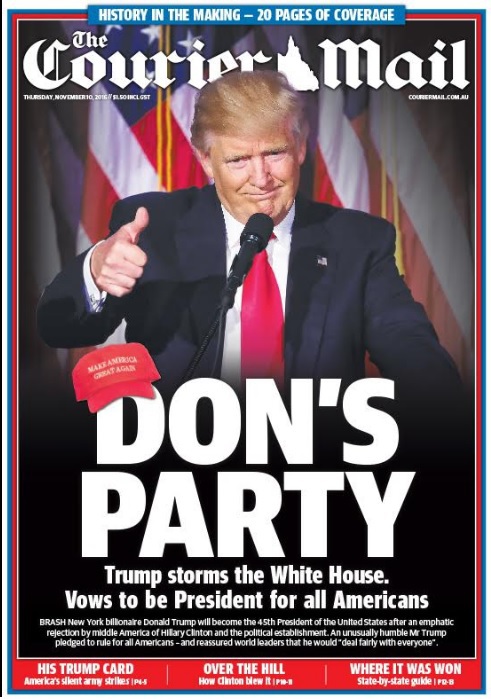