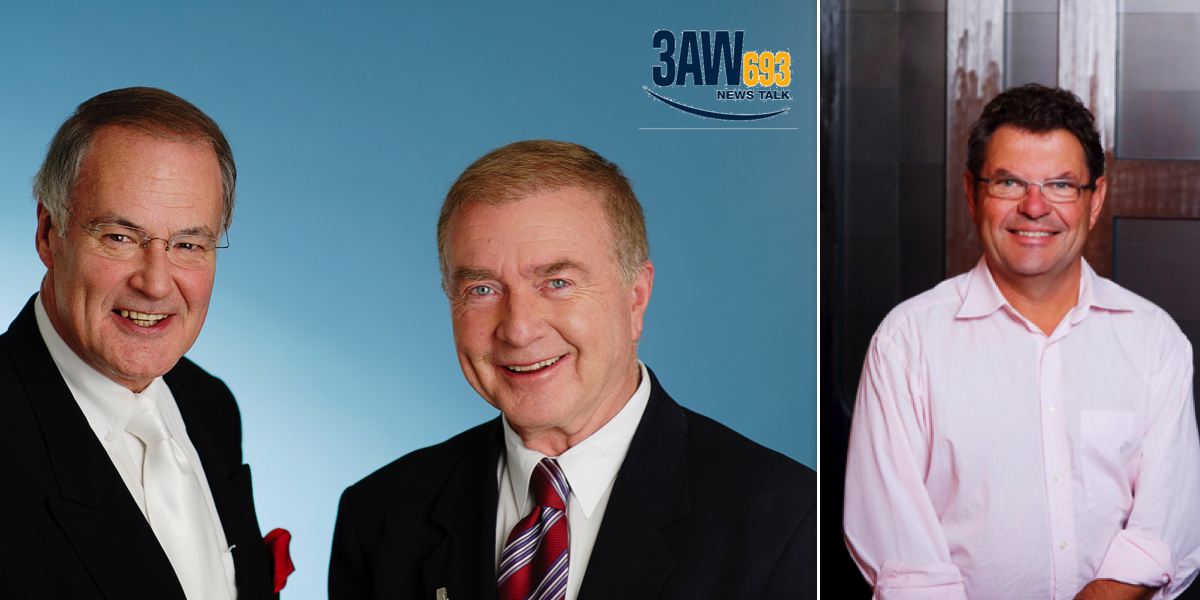 Melbourne’s Number 1 station 3AW can announce changes to our programming line up starting at the conclusion of the 2015 AFL season on October 5.
From Monday October 5, our strong-rating Sports Today program hosted by Gerard Healy and Dwayne Russell will broadcast in the new time slot of 6pm-7pm weekdays.
From 7-8pm, nationally renowned finance expert Ross Greenwood will present Money News. This program will keep our audience up to date on the latest finance news including the share market, superannuation and mortgage issues from one of Australia’s best.
Nightline with Bruce and Phil has provided 3AW listeners with more than 25 years of nightly companionship and entertainment. This tradition will continue from 10pm-midnight weekdays from October 5, as well as Remember When from 8pm-midnight Sundays. Phil Brady will continue to hold the fort in coming weeks while Bruce Mansfield is treated for prostate cancer. We hope to welcome Bruce back behind the microphone in November, but his health remains our main priority.
Steve Price couldn’t beat us, so he’s joining us. Pricey returns to 3AW from 8-10pm, Monday to Thursday. He will be joined each night by provocative columnist Andrew Bolt for an hour of hard-hitting radio from 8pm. There’s no doubt Bolt is one of Australia’s leading agenda-setters, and now Melburnians will have the opportunity to tell him what they think. Both Bolt and Price are locals who have worked in the Melbourne media industry for many years.
3AW’s director of operations Stephen Beers said the new line up enhances 3AW’s position as Melbourne’s home of News, Talk and Sport.
“We are constantly looking for ways to engage our audience with informative and entertaining content,” he said.
“The addition of Ross Greenwood, Andrew Bolt and Steve Price will add to 3AW’s stellar line up and ensure 3AW’s evening listening is not to be missed.”
Source: Macquarie Radio

Statement from 3AW’s Simon Owens, producer and sometime co-host of Nightline, on the programming changes from the show’s Facebook page:

I’m not one to “toe the company line”. I have spoken honestly when asked about the goings on at 3AW many times. I like to take the Derryn Hinch approach and just be honest. He has said, “Always tell the truth, then you don’t have to remember what lies you told.”
Am I happy about today’s announcement? Selfishly my answer is “No.”
We lose the wonderful Patti Newton, Doug Aiton, Andrew Maclaren and John Blackman segments.
However, I was employed by Steve Price when he ran 3AW and worked with him on drive in 2001 and I have always held him in high esteem as a broadcaster. A Melbourne-style broadcaster.
He was very successful here.
Steve knows better than anyone that if he tries that crap Sydney “bully boy” stuff here he will bomb. I am pretty sure that most of you will like what you hear.

History Lesson # 1
In 2000, Derryn Hinch hosted Nightline. By the end of the year ratings from 8-9pm were better than Bruce and Phil ever achieved. But ratings after 9pm bombed. At 8pm our roads are still busy and I reckon Pricey will be a good fit there. He is entertaining and a stirrer.
9-10pm I am not so sure.
But at 10pm, Companion radio is what rates its socks off. That’s Bruce and Phil at their best and that’s where they shine.
Am I happy? No. But do I think this is a bad decision? No.
Ultimately it is you who will decide. If Pricey is woeful, you won’t listen and he will be axed (Derryn Hinch style December 2000).
If he is good he will stay.

History Lesson # 2
In the 1980s 3AW was huge because the audience loved Personality Radio. Then in 1989 management axed that and put in “Thinking Persons Radio”
You all switched off and the station collapsed.
So they brought in Ross and Dean, Neil Mitchell, Paul Barber, Bruce and Phil etc and you all came back (eventually) and made the station number one.
Ultimately – you, the audience, program this station.
I have faith that Pricey knows the Melbourne audience. But if he doesn’t get it – you’ll let him know.
As for Bruce and Phil? Six nights a week, but with a reduced workload. Phil tells me he is very happy. To be that popular and that successful and employed full time in his 70s is awesome.
I celebrate 20 years at 3AW on December 18th. I am honoured and lucky to still be with them. Personally I am happy to see Pricey back home where he belongs.
Blackers and Maclaren are still on staff, if we can find new spots for Patti and Doug I will be happy.
Oh, and I want Rex Hunt back too!!!