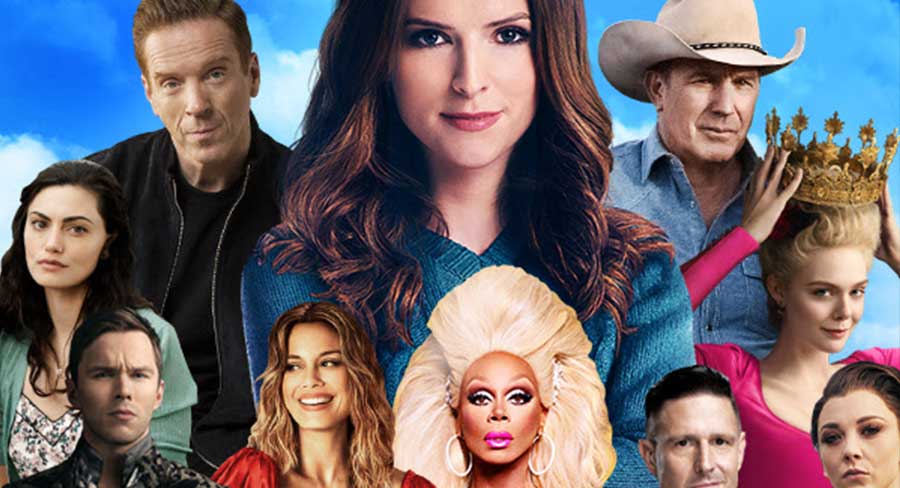 With Australians still waiting for the world to go back to normal Stan is continuing to release more premium content. In what Stan is calling ‘Australia’s biggest ever lineup’ shows that have been recently released or will be released soon include  Love Life, Billions, Normal People, Ramy, The Great, Yellowstone, RuPaul’s Drag Race All Stars, The Bold Type, Black Monday and all are exclusive to the platform. Also, the new Stan Original Australian Lockdown Comedy Festival will release a new episode every Saturday.

Stan has provided a preview for some of its top shows:

Featuring performances from over 20 of Australia’s favourite comedians, including Wil Anderson, Nazeem Hussain, Dave Hughes, Cal Wilson, Tommy Little, Claire Hooper and Tom Ballard, the Australian Lockdown Comedy Festival is a four-part Stan Original Series that will see some of Australia’s best comedians putting on rare and raw performances from the comfort of their own homes. Their audience will range from loud and loveable kids to adorable pets, bathroom mirrors, empty lounge rooms and laundry baskets. You’ll see them in their bathrooms, bathrobes, baths, bedrooms and kitchens but most importantly, they’ll be streamed directly into Australian homes ready to make us laugh.

It’s the horny AF series everyone is talking about. Based on The New York Times Bestseller, Normal People tracks the tender but complicated relationship of Marianne and Connell from the end of their school days in a small-town west of Ireland to their undergraduate years at Trinity College. At school, he’s well-liked and popular, while she’s lonely, proud and intimidating. But when Connell comes to pick up his mother from her cleaning job at Marianne’s house, a strange and indelible connection grows between the two teenagers – one they are determined to conceal. A year later, they’re both studying in Dublin and Marianne has found her feet in a new social world, but Connell hangs at the side lines, shy and uncertain.

The next instalment in the Penny Dreadful saga stars Natalie Dormer, Nathan Lane, Rory Kinnear and Daniel Zovatto in a twisting, supernatural crime caper set in 1938 Los Angeles – a time and place deeply infused with social and political tension. When a grisly murder shocks the city, Detective Tiago Vega and his partner Lewis Michener become embroiled in an epic story that reflects the rich history of Los Angeles: from the building of the city’s first freeways and its deep traditions of Mexican-American folklore, to the dangerous espionage actions of the Third Reich and the rise of radio evangelism. Before long, Tiago and his family are grappling with powerful forces that threaten to tear them apart.

The Great, All Episode May 16

Written and created by Oscar-nominated Australian writer Tony McNamara (The Favourite) and starring Elle Fanning (Maleficent) and Nicholas Hoult (Stan Original Film True History of the Kelly Gang, X-Men Franchise), The Great is a satirical drama about the rise of Catherine the Great from outsider to the longest reigning female ruler in Russia’s history. A fictionalised, fun and anachronistic story of an idealistic, romantic young girl, who arrives in Russia for an arranged marriage to the mercurial Emperor Peter – this comedic series sees Catherine immersed in a depraved and backward world that she quickly resolves to change. All she has to do is kill her husband, beat the church, baffle the military and get the court onside.

Love Life, the first full-length scripted series to star Oscar nominee Anna Kendrick, is about the journey from first love to last love, and how the people we’re with along the way make us into who we are when we finally end up with someone forever. Executive produced by Hollywood heavyweight Paul Feig (A Simple Favour, Bridesmaids), this fresh take on a romantic comedy anthology series is from creator and co-showrunner Sam Boyd (In a Relationship) and is produced by Lionsgate Television and Feigco Entertainment. The series will follow a different protagonist’s quest for love each season, with each half-hour episode telling the story of one of their relationships. Anna Kendrick (Pitch Perfect, A Simple Favour) stars in the first season along with Zoë Chao (Downhill, Strangers), Peter Vack (Someone Great, The Bold Type), Sasha Compere (Miracle Workers, Uncorked), and Lesley Manville (Phantom Thread, Another Year).

Condragulations, you’re a winner baby! Fan favourite queens from past seasons of this 13-time Emmy Award winning smash-hit reality series return to the competition – but only one will be crowned. The challenges are super-sized, the outfits are outrageous and the rivalries are fierce, as the queens do whatever it takes to win a coveted place in RuPaul’s Drag Race Hall Of Fame. R U ready for battle?