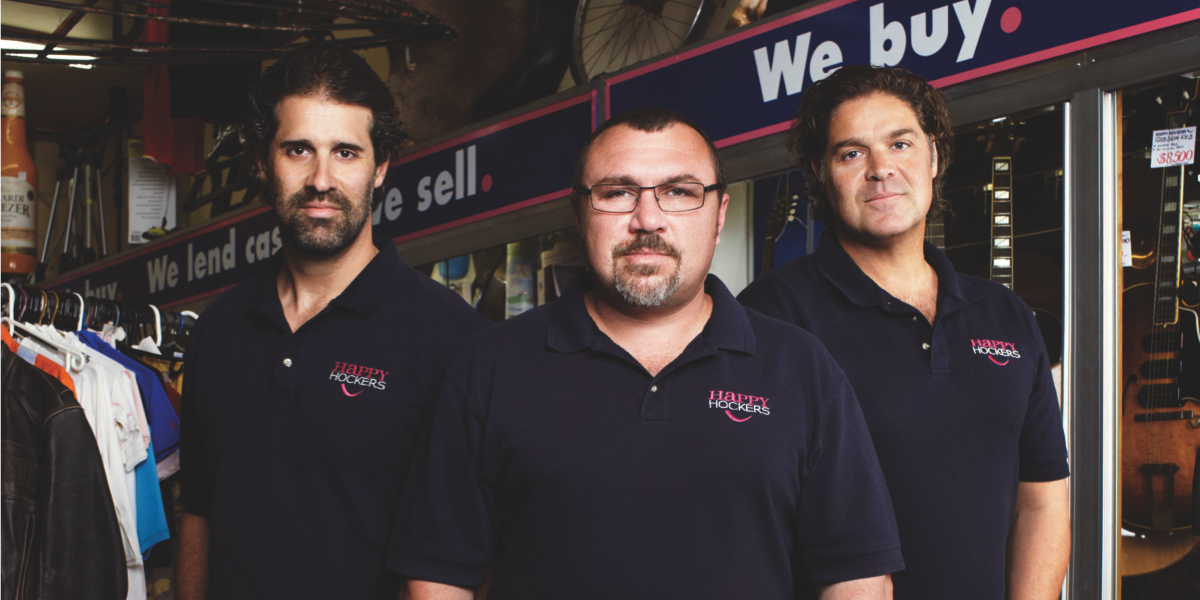 What do Las Vegas and Sydney’s Kings Cross have in common? Outside of being noted adult playgrounds and backpacker hotspots, both places are the locations of the highly successful Leftfield Productions format Pawn Stars. Following an exhaustive casting process, the US production house settled on Mediaweek’s neighbour Happy Hockers for the Australian franchise of the hit series.

Ahead of the series’ launch next month on Foxtel’s A&E channel, we spoke to Happy Hockers owner and soon-to-be reality television star Aaron Senes about the show.

“We were approached about two years ago by Leftfield, who wanted to put our business in the running for Pawn Stars Australia. We then found out that we’d succeeded in January last year, and we filmed throughout 2014 as well as a few months earlier this year.

“They had a talent scout looking at all of the [pawn] businesses in Australia that started online. On our website, we have a television section called Baz & Shaz, which is my brother [and business partner Ben Senes] and Shannon [Folden], where they do a little bit of information on each of the items. You can click on the website, and they’ll be talking about Ray Ban sunglasses or how to pick a fake watch or other things that are important to buying second hand. I really think that caught Leftfield’s eye, enough to make them think ‘Hey, these guys are interesting characters’ and it went from there.”

Interesting characters are pretty much the defining element of a career in the pawn industry, Senes explained. “We get every walk of life in our shop, from people who are scraping together whatever they can, to very very wealthy people who are asset rich but cash poor for a period in their lives. We get a lot of musicians, a lot of actors and a lot of small businesses on the lending side.

“With buying and selling second-hand goods, you get a lot of collectors and people who work on a budget. Why spend $2,000 on a watch when you can spend $1,000 in our shop? Why buy an $800 TV when you can buy it for $475 in our shop? Our clients are people who think budget and think value, as well as people looking to buy things that you can’t get any more. If you’re interested in antiques or collectibles, the second-hand market is where you find them, and other unique items,” Senes continued, as he also noted the environmental benefits of buying second-hand products.

When Mediaweek visited Happy Hockers, the store was brimming with second-hand wares including vintage posters, tools and even a Barack Obama figurine.

“We’re just three normal people
like anybody else,
just trying to make a
living through
second-hand goods.”

The premiere season of Pawn Stars Australia features alleged Don Bradman memorabilia, a fossilised megalodon tooth and a stuffed koala made from kangaroo fur, and Senes said that the shop’s wares definitely tended towards the unusual. As to what the most bizarre item that Happy Hockers has ever been sold, he was unsure. “It’s hard to say, because of the volume of stuff. We’ve sometimes been given skulls – teaching-related human skulls used for media things. There’s been some really cool sporting and music-related memorabilia – we’ve had stuff that The Beatles have signed, photographs and sports equipment. There are so many different things out there, which is what I really love about the business. There’s never a dull moment! You never know what you’re going to get around the corner. There’s always something, and it’s always interesting. Some things are great and fascinating, and others are bizarre and gross – we’ve had people come in and try to sell us their teeth before!”

Although the unpredictability of life at Happy Hockers makes for good viewing, Senes noted that he was confident that the interaction between the shop’s owners would also be a high point for audiences. “We’re just three normal people like anybody else, just trying to make a living through second-hand goods. There’s obviously a lending side to it, but it’s the same deal. People can relate to us because everybody’s got that guitar or that surfboard just sitting in their garage taking up space. Instead of leaving it there, they think ‘I can just take this down to Happy Hockers and leave with the cash to buy something that I actually want instead.’ It’s heaps better. Quite often, people will see something on a TV show like an old yoyo that’s valued at $300, and then they’ll get to cleaning out their cupboards,” he said.

“That’s what we love, because the things that we get are real-life times that everybody has had at some stage or other during their life. You can see the journey of these items, as they change in price and increase in value – but you have to have the knowledge to work with that! We’re not rocket scientists though. We’re just ordinary people who work in the second-hand market because it interests us and we can make a dollar on it,” Senes said.

The Senes brothers and their business partner Shannon Folden all have a close relationship, having been friends since they were young. “Our families have been friends forever. We all grew up together. Shannon used to run cafes and restaurants, and he got a bit over that business. Unique items were always a favourite of his. He was a bit of a wheeler and dealer on the side. We ended  up doing a few bits and pieces together online, and then he came to work at the shop and now he’s running it.”

The camaraderie born of working with family members and close friends obviously makes for good television viewing – the original US Pawn Stars takes place in a pawn shop run by three generations of the same family. It seems clear from talking to Senes that Pawn Stars Australia will have a similar tone. “We’re just three mates enjoying giving each other a hard time and loving what we’re doing. We bounce ideas and prices and knowledge off one another, and other people seem to laugh as we carry on. We’re just three blokes that enjoy working together and enjoy sharing the knowledge. There are a lot of things that you can’t just find a price on. You need to have a gut feeling. It’s good to be able to bounce off the people you work with, who share that same gut feeling.”

Senes’ career has been an interesting one, he revealed when Mediaweek asked how he became involved with the pawn industry. “It was the early 90’s, and my brother and I were approached by an ex-business parter asking if we wanted to go halves in a shop in King’s Cross. I was a professional sportsman before that, but I wans’t working due to an injury. We got stuck in, and really loved the business – so much that we bought it. Now, I’m a pawn broker.”[/blockquote]