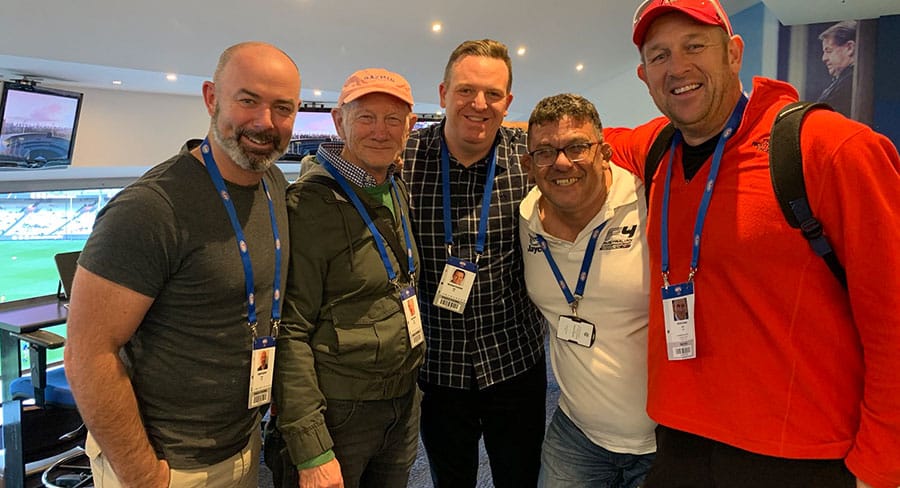 “KB has so much to be proud of during his brilliant career at SEN.”

It was revealed yesterday that one of the original broadcasters at SEN sports radio resigned last week.

Kevin Bartlett was the host of the morning show from 9am until noon when the station launched in 2004 and was the highest-rating broadcaster on the station.

The new owners of Melbourne’s SEN, under the leadership of Craig Hutchison, moved Bartlett from morning to drive at the start of 2018 where he co-hosted with station part-owner John Rothfield (aka Dr Turf) as ABC broadcaster Gerard Whateley moved to the SEN morning slot.

“It suits me to leave and it probably suits them that I leave as well.”

It has been a dramatic couple of weeks at the Melbourne radio station after a fire forced SEN to evacuate the building a fortnight ago. The station was off air for three hours after the evacuation because of a blaze on another floor in their building, with the station communicating to listeners via social media.

For a number of hours the station relocated to a radio commentary box inside the MCG before power was restored to one of their new studios. It took over a week for the station to be fully operational again late last week in their Southbank building.

Former colleagues of Bartlett’s paid tribute to him on social media after the news of the resignation broke.

Former SEN afternoon host now with RSN breakfast and 3AW, Daniel Harford wrote: “Without doubt, Kevin Bartlett is the greatest entertainer on radio. Comedic timing and sporting cache like no other. He ‘gets it’.

“He is also the most generous on air partner any presenter could wish for. He wants YOU to be the star. I am forever indebted to him.”

Seven’s Jason Richardson said: “KB has so much to be proud of during his brilliant career at SEN. He’s an incredibly generous host & absolute pleasure to work with! Well done ‘Two Dogs’. Send him off in style SEN.”

Writer and broadcaster Rohan Connolly said: “I’m sure KB didn’t make his decision lightly, he’s a very loyal person. All I’ll say is this: (1) It’s important to treat people who serve an organisation loyally with consideration and some respect. (2) Ditto the audience. Content actually matters.”

Photo: Bartlett posted a photo with former colleagues earlier this year, which wouldn’t have impressed management. Pictured with KB are Harford, Marko and The Ox (Macquarie Sports drive hosts) and Tony Schibeci (former SEN broadcaster, Voice of the G and podcaster.