• Jess Eva co-hosts ‘Moonman In The Morning’ at Triple M

The former Block star Jess Eva jumped ship from breakfast radio in the Sunshine Coast to Sydney’s Triple M network at the start of 2019.
With the huge shift from regional to metro radio, Eva is content in her new role at Triple M co-hosting breakfast show Moonman In The Morning alongside Lawrence Mooney, the soon-to-depart Gus Worland, and Chris Page. Eva told Mediaweek what it’s like co-hosting a show with three men, her experiences in metro radio, and her favourite moments so far at the new gig.

Eva said she is very grateful for her time in the smaller radio market. “I loved Sunshine Coast Radio. I have so much respect for every regional and provincial breakfast team. I was doing that for 13 years where you’re also playing producer, audio producer, breakfast announcer, semi promotions manager, meeting with the guys from Harvey Norman or something trying to get a sales pitch over the line; then you teach yourself how to edit video to get your social likes up, and it’s all purely for the love of radio,” explained Eva.

“You don’t get many ratings results and for most of my regional time we didn’t have ratings at all, so the only reason why you would work hard is because you love radio and you want to create a good product. Coming to Sydney you surrounded by four or five producers, an audio producer and a video producer.” 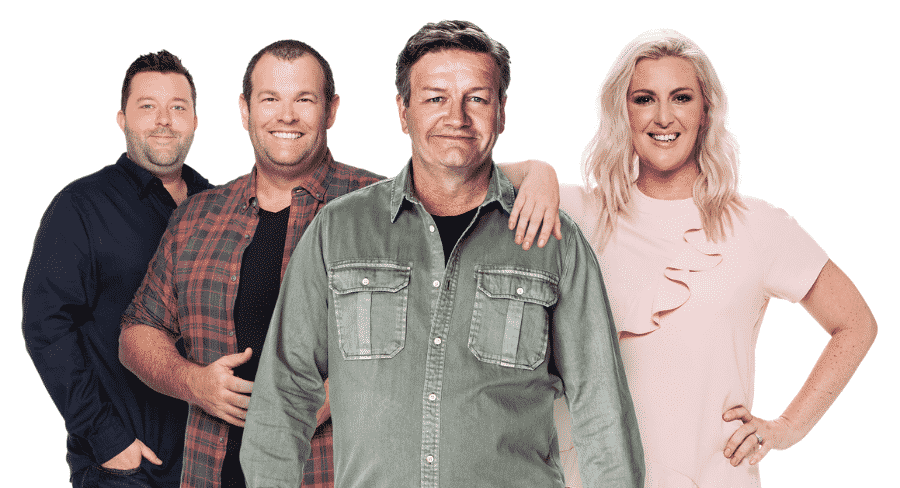 Eva has only been familiar to co-hosting a two-person radio show for her entire career, and is now co-hosting a four-person radio show. Eva said it was quite challenging at the start with adjusting to the team size. “However after the first couple of days, I thought to myself ‘oh my gosh. I’m getting paid more money than I’ve ever been paid before and I have to talk less’,” laughed Eva.

“Everyone in that show has something valid to say. We have this mindset that as long as the speakers sound good, it doesn’t matter who’s talking.”

Eva said she feels like one of the luckiest people in Australia working with Lawrence Mooney. “Anyone that’s met Mooney knows that he is one of the greatest minds in radio; to be able to work alongside him and observe and learn from him is fantastic,” shared Eva.

“There is no school in the world that would give you that training and he’s very generous in the way that he teaches you how to perform. I feel like I’ve improved more in the last eight months than I have in 13 years in radio. He has a genuine desire for this show to work and he is very generous in passing on his knowledge.”

On that note of working alongside Mooney, Eva shared with Mediaweek how she doesn’t mind working with the team of men as she gets along with them really well. “I love the boys and I would honestly tell you otherwise, because I want to make my experiences as real as they can for other women who are going into all-male environments,” said Eva. “Of course men are going to act a little differently to women off-air, but I quite enjoy it; It’s like having a whole bunch of brothers, and at the end of the day they stand up for you, they protect you.

“I had an incident I spoke about on-air a couple of months ago where a taxi driver was quite abusive to me, and Moonman was outraged. He talked about it on-air and he was actually emotional. Even though I know from an outside point of view he’s a comedy/satire guy, he has a heart of gold and would go to war for you if necessary. So, how lucky am I?” said Eva. “The male and female relationships have been really beautiful and healthy in my environment and my experiences.”

Eva shared her thoughts on the head of Triple M network Mike Fitzpatrick, and said he is a great leader when it comes to teamwork. “At the ACRAs on Saturday night, we were on his table. Every region, no matter where you came from, Mike Fitzpatrick was standing up giving his biggest round of applause in that entire crowd and had the rest of our table up to congratulate. Coming from a regional market, it just really hit me,” said Eva. “I think that’s where the culture of that love and teamwork comes from. I think we were the only network to do that; it’s very uncommon.”

Eva laughed when she said that some of her favourite moments at Triple M have been the hilarious conversations off-air. Although, Eva revealed that on-air, she’s really loved helping people that are in need. “We’ve taken a bit of the Block part of my background. We’ve teamed up with different tradesmen and renovated houses for people who are in desperate need – so I’ve really enjoyed that,” said Eva.

“I’ve also really enjoyed Moonman’s different characters – I think the idea of characters was a really brave thing to bring into the market, because you’re so vulnerable and it’s just you and I think he nailed them,” said Eva. “I love listening to Mooney talk, so sometimes I have to remember it’s my turn to talk and that I’m not an audience member,” said Eva as she laughed.

“Another great moment was the introduction of [executive producer] Laura Bouchet who we poached from Jonesy and Amanda. I think the introduction of her to our show in March was a winning move by the company – she’s the best in the industry and I think she has just fitted in so well and just made our little team complete.”