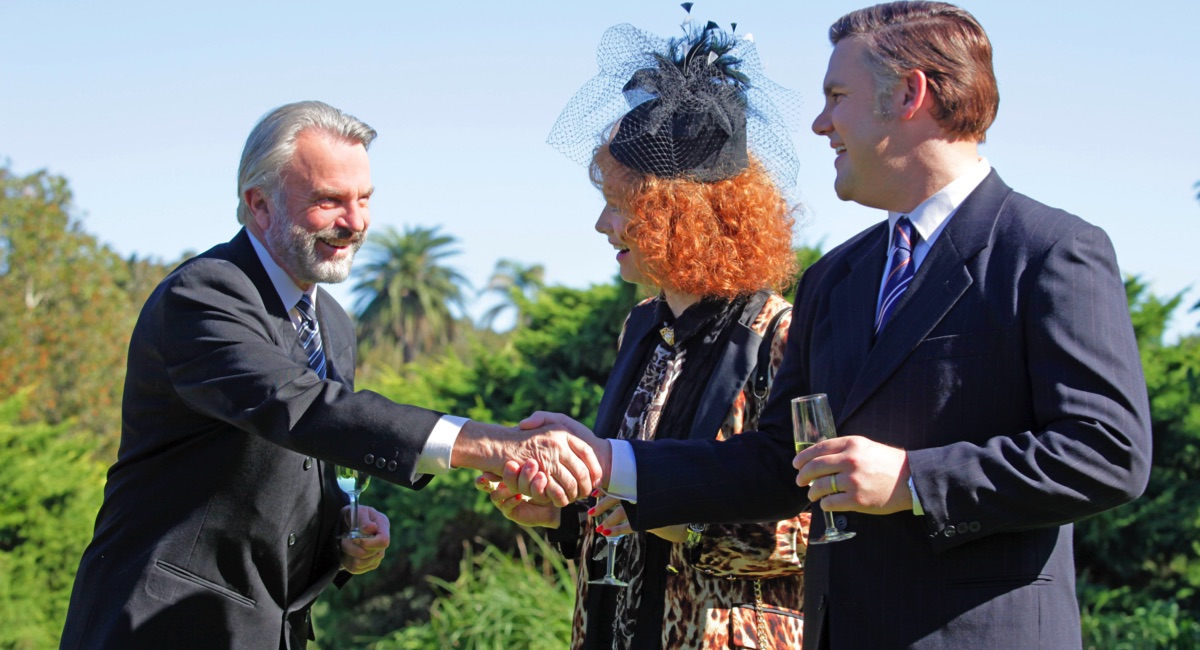 Eileen Bond doesn’t sound too thrilled about Nine’s latest Australian bio miniseries, the CJZ-produced House of Bond. Mediaweek contributor Dan Barrett visited the set during filming last year to talk with some of the cast and producers.

How much did you know about the famous Australian?

I was not familiar at all with Bondy. I obviously knew of him, but I didn’t know any real detail at all until I got this gig.

It appealed to me that it was a true story. I was playing a real character, a real businessman, and a bloke that did all that he managed to achieve. I am always drawn to something that is a true story. I was thrilled when I got the role. I just went into research mode and really analysed the script. I tried to talk to people who knew him. Once you dive in that far, you go into the story of him and realise he was a larger than life character who achieved so much from nothing. It’s quite fascinating. I was pretty stoked to be the one to tell that story.

What resonated about Bond’s life?

The thing that sticks out for me with Bond is that he had such courage, drive and passion to do what he wanted to do. He had this tunnel vision where he went “I’m going to do that” and then he did it at all costs. It’s quite fascinating to look at a 20-year-old guy saying he’s going to be a millionaire by the time he’s 21 and then go and achieve that. He started with nothing, then all of a sudden became a multi-millionaire, then won the America’s Cup for Australia. That’s such an epic battle to win. It’s still one of the biggest sporting wins in history. 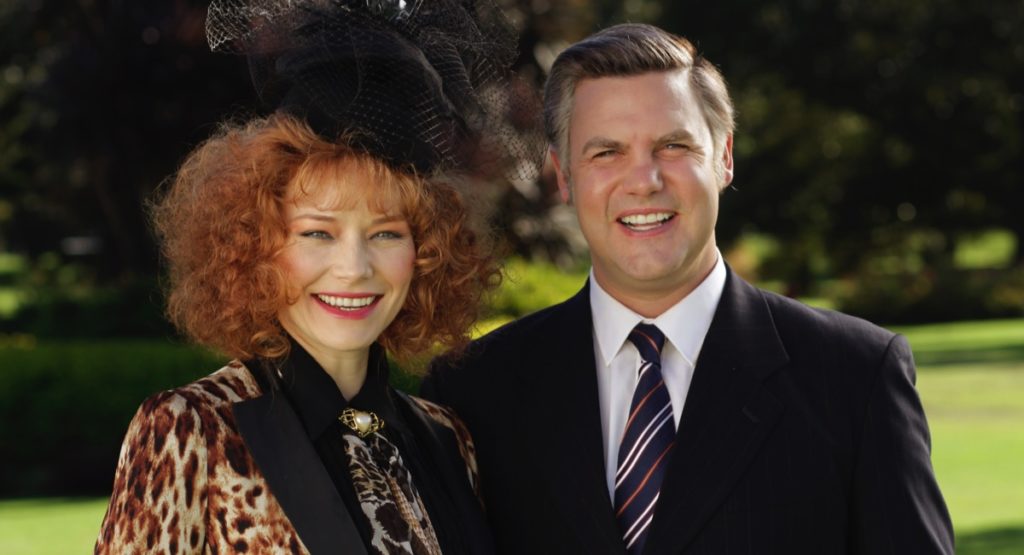 Adrienne Pickering and Ben Mingay as Eileen and Alan Bond

Which era of his life gave you the most to play with?

My favourite part of playing him was when he won the Cup, when he was the king. It was such an epic time. It was in the 80s. The 80s were awesome anyway. There he was out in the yacht, tanned up, with some cool silver pop sideburns, winning the America’s Cup and ruling the world for a minute. I can only imagine what that must have felt like, doing a tickertape parade with thousands of people and the whole of Australia chanting your name. It would have been out of this world. That was pretty cool. That was definitely the highlight for me.

Did you watch other biopics to see other actors portray a real-life person?

I didn’t look at anything else. I wanted to come at this fresh with the tools that I already had. I just wanted to do the script and get it told. You put yourself in the capable hands of a director like Mark Joffe. I felt safe like we were going in the right direction the whole time. It was good and reassuring.

Why are you back doing TV?

There’s been a sudden improvement in television worldwide. Certainly springboarded by the American cable shows, which are high quality, good scripting, well-acted, and you can see the names of the feature film directors who want to do it and the great actors. You get time to tell a story properly without the constraints of a feature film, where most of them are naff at best. There are many comic book re-runs and proportionally, very few independent dramas. That’s what I’m interested in. Anything that’s a bit independent. We’re in an independent world and that’s what we have to exist in. I’ve had my time in the studio system in turnaround. It’s very frustrating. I like to work. I’ve been directing since I was 23. The industry is always looking for whoever is the hot new thing without acknowledging the more experienced people who got better as they went along. Having said that, there are a few people who aren’t much good either. [laughs]

What TV shows do you find interesting?

I watch everything as a layman. I’m not one of these people who notice everything. I only notice it when it is bad and that is usually to do with performance. I love Veep. There are also good, but trashy, shows like Ray Donovan. I see a lot of cinema and not a lot impresses me. There are also the fabulous Danish dramas, which for a small country they’re really knocking them out. Maybe it’s because they’re speaking another language and you don’t notice all the faults. The Bridge, Borgen, all those series are high quality shows.

Were you interested in Bond immediately, or did you have to come to it?

The thing about this story is that it is larger than life. Apart from changing dates and things as we did with the Rinehart story, you can’t make this stuff up. In fact, it’s completely unbelievable if we made it up.

What were your style ambitions for the production?

What we tried to do with this was a cross between House of Cards, The Big Short, The Wolf of Wall Street, and a bit of Goodfellas. We set the bar low. [laughs]

Was there a concern younger viewers may not know Bond?

We don’t assume an audience knows who he is. I know that the promos don’t assume people know what the America’s Cup is, or that they know anything to do with the fact he siphoned $1.2 billion. We did House of Hancock as well, but people don’t know the backstory of who she is. It was the backstory we were getting to. The only contemporary part of Hancock was the last 10 minutes of the film. The rest was all backstory. Bond is different because it’s doing two things: it’s telling Bond’s story as well as telling how Australia changed along the way. How he self-created himself as an entrepreneur and became a hero in a sense by winning the America’s Cup in 1983. Then it’s about the downfall – it is about our awakening to heroes not being who we think they are.

I’m 45. When the America’s Cup happened, I was 13. I was watching the America’s Cup as a kid and it was a big thing. You didn’t understand the geopolitical or cultural effect that it would have on the country that we kind of grew up in overnight. My memory was feeling patriotic. At the end of part one is when we’re building up to winning the Cup. There’s a montage sequence cutting to all different people and their reactions. One is a young boy with his father sitting on the couch at 5am watching the race.

How much dramatic licence is taken?

You are always inspired by the events. You can’t make a doco. We try to tell the story we want to tell as well as staying objective. You want a polemic against Alan, but you don’t want a love letter to Alan either. We’re somewhere between, saying what we feel is important about the world. Alan also did a lot of good. Our dramatic question is: Is he a hero or a villain? It’s a question of how power corrupts. Once you are king of the world, what do you do? Some people, like Bill Gates, might give it away. But most people go for more power. The hubris is their undoing.

Is Australia running out of big stories?

I was joking we should do [TV chef] Peter Russell-Clarke. There are Hoges, Brock and Olivia. There are probably a couple of others I don’t know about yet. Will we run out? Eventually, but there’s still plenty of good fodder in our history to go to. I always thought Ivan Milat wouldn’t happen because it was too dark, but then it happened and it worked well for an audience.

When did CJZ start looking at Bond as a subject?

Bond was the one we fell on straight away. We started talking to Paul Barry about his books. He came on as a consultant on the film, which was fantastic because he knows the Bond story better than anyone. He was part of the development process with the script and we had his books as reference. His books are very business orientated and only touch upon the private lives, so then it’s about doing our own research. Nine has its own archive, so we pulled 20 DVDs of archive material.