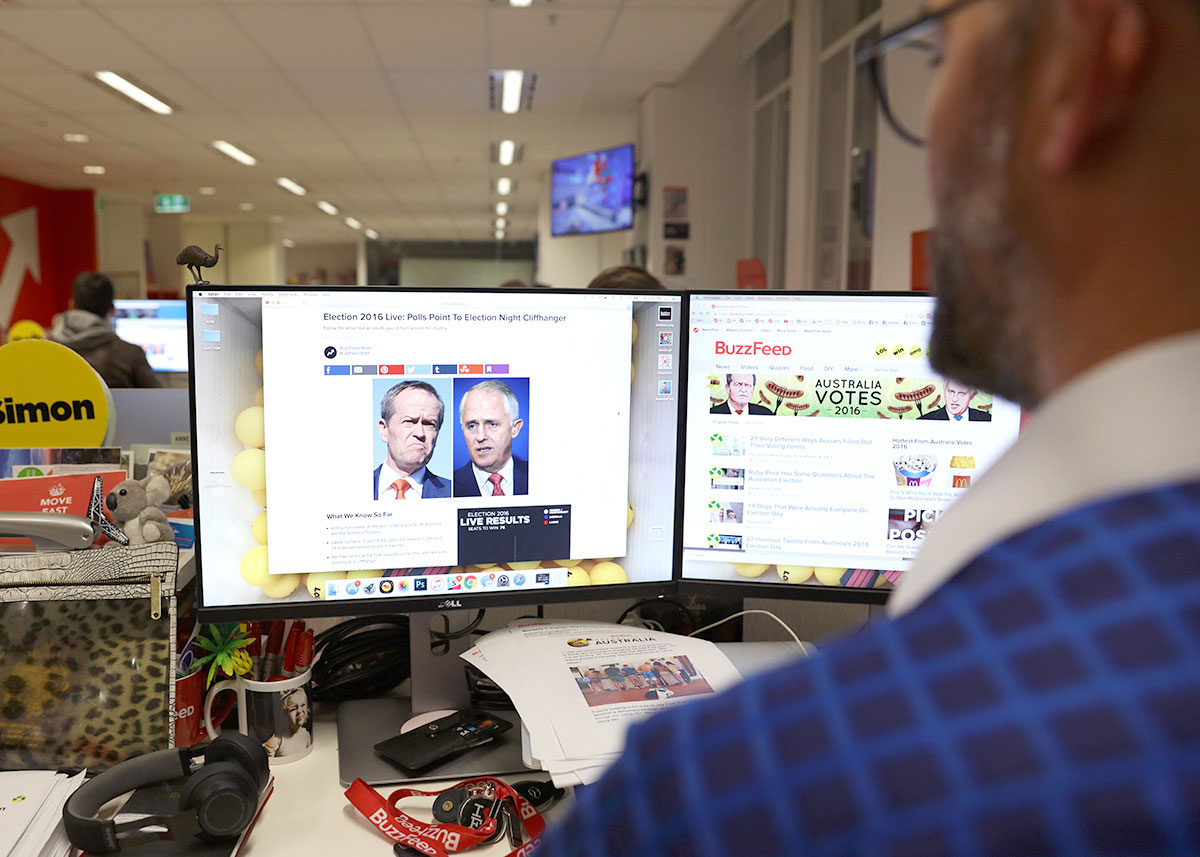 Inside the BuzzFeed Australia offices on election night

Election night was a cold and chilly Saturday evening – both the weather and for the political prospects of many candidates. Staying warm in their Sydney office, the BuzzFeed editorial team was hard at work providing coverage of what turned out to be a long and unpredictable night of Australian politics.

Within the office, news chief Marni Cordell led the team of 10 in publishing the news as it was developing on the BuzzFeed site and its social channels. Editor Simon Crerar oversaw the news gathering effort and tracked site traffic through BuzzFeed’s custom-made CMS, while ensuring video packages recorded from voting booths throughout the day were published online. Crerar also had the most important role of the night – managing the complex pizza order to keep the troops happy for what was shaping up to be a very long night.

As history was made early in the evening with Labor candidate Linda Burney claiming victory in the seat of Barton, now the first indigenous woman elected to Parliament. Cordell worked with BuzzFeed’s Indigenous Affairs reporter Allan Clarke in publishing the story. For BuzzFeed, with its progressively minded youth audience, this was one of the biggest stories of the night. 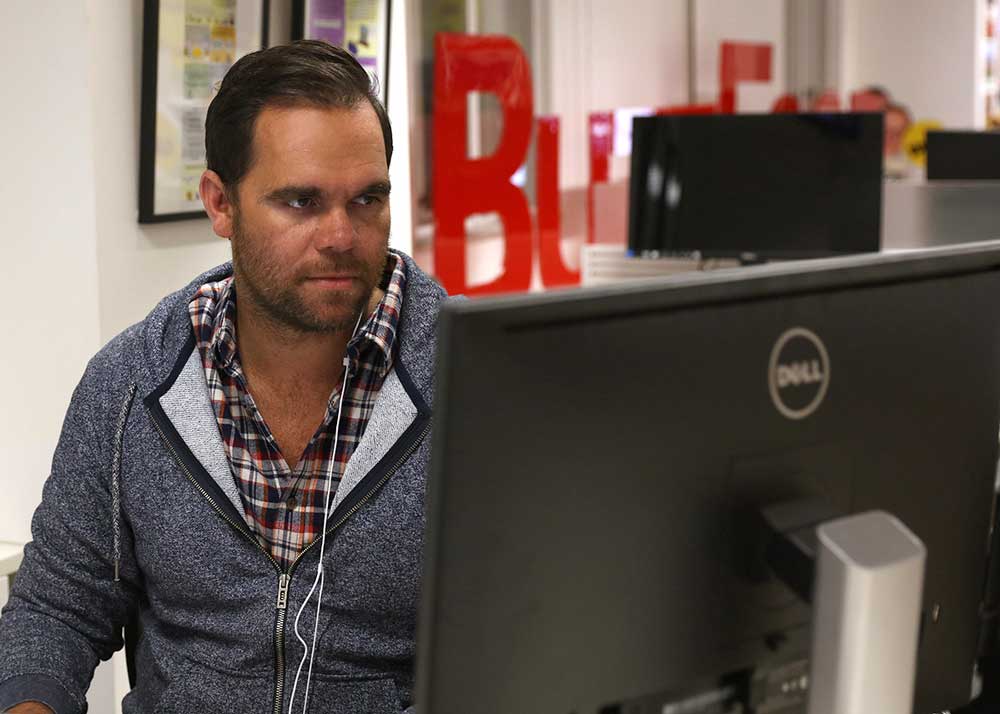 Meanwhile BuzzFeed reporters Alice Workman and Mark Di Stefano were out in the field, reporting from the Prime Minister’s and Opposition Leader’s events where they produced copy for the BuzzFeed website, along with social media posts, photos, and streaming Facebook Live video.

Cordell began working at BuzzFeed Australia in April. Previously she was the editor of New Matilda and, most recently, editor of Crikey. Her first day with BuzzFeed coincided with the failing of the government to pass the ABCC bill, informally kicking off the election campaign. From day one she has been in election mode.

“What I was excited about at BuzzFeed was taking a team of people who know how to deliver a story and know how to reach their audience. They’re inside the social web and introduce more discipline around the journalistic aspects of those stories,” Cordell explained. 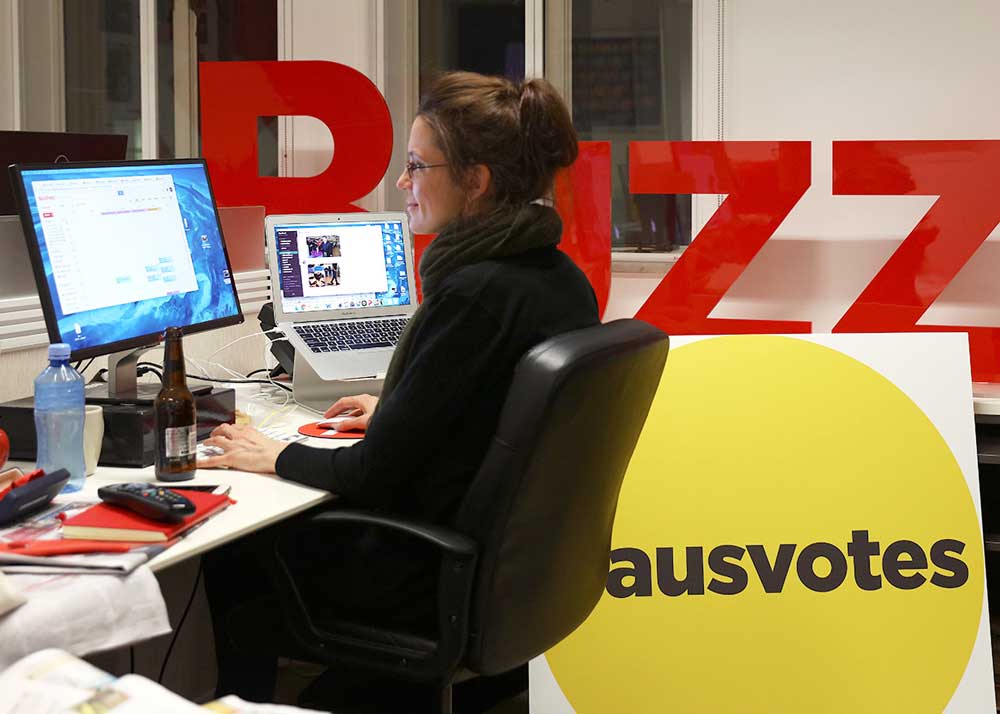 At first, it wasn’t entirely clear what direction the BuzzFeed team should take while covering the election, but after feeling their way around, “it became really obvious quickly which issues work for our readers. I narrowed the team down quite quickly a week into the campaign. I told the team that these are the issues that we’re going to focus on. Don’t worry about the rest,” Cordell recounted.

“We had a couple of big stories we were chasing, slow-burn investigative style stories, but other than that the issues we were focusing on were deregulation of higher education, unemployment. We came out of the budget lockup with a big story on the coalition’s PaTH program – unemployed young people get training and then put into internships, but the internships are really badly paid, around $4 an hour. You also get your welfare payment on top of that. We added it up and it was still under the minimum wage. We came out of the budget lockup with that story. We were the only ones leading with the headline and that went really well with our readers.”

Another issue that Cordell said resonated strongly with the BuzzFeed audience was the NBN: “Internet access and the lack of internet speed during the campaign. People have been really angry about the delays with the NBN. We’ve noticed that has done well for us too. When we were in New England, we could barely work in Tamworth. It’s a city. It’s not even a country town.”

“We’re recognising that the audience we have, which comes to us for the fun stuff, is also deeply engaged with the world and wants to know what’s going on” – BuzzFeed editor Simon Crerar

The most challenging aspect of the campaign, Cordell advised, was the logistics involved with providing such broad coverage with such a small team. Both Workman and Di Stefano were assigned to the media joining the Prime Minister and Opposition Leader on the road, but only for short stints.

“We pulled them on and off,” Cordell said. “A lot of the media did that. Even Fairfax pulled their journos off. It’s just too long. It’s so expensive. It averages about $1,000 a day.”

For reporter Alice Workman, seeing the humanity of the leaders during unguarded moments where they weren’t being media-managed was the most valuable experience of being out on the road with them. The media managing of the politicians also intrigued her.

“Putting on your scepticism hat and watching how perfectly planned and advanced everything is quite fascinating. Watching ‘avoid this sign, walk this way, these are the pre-planned people we want you to talk to’ – that’s all pretty fascinating.

“There was a rule after Bill Shorten got one picture outside a KFC, they weren’t allowed to go anywhere near a KFC after that. When they do shopping walks, they always avoid anything to do with lettuce,” Workman explained.

Live video has played a major role in BuzzFeed’s election coverage, with the team embracing Facebook Live. “I travelled around on my own for a bit doing that. It was a bit of a technical issue having to logistically do it all myself,” she said.

The use of social broadcasting tools has given Workman a greater appreciation for her peers. “Even though we often complain about old school media holding us back, all the TV and newspaper guys, everyone is podcasting, Periscoping, live Facebooking, blogging, and doing everything at the same time. We’re probably a bit more adept at it because we do it all the time normally, but everyone has been having a go and doing as much new media stuff as they can.”

Once the campaign concludes, the BuzzFeed team is going to make a hard pivot toward the issues that served as the foundation for the audience’s interest in this election. “The plebiscite is a really big one for us. We will be following that closely,” Cordell explained of the marriage equality plebiscite that was expected later this year.

“Obviously we have Lane [Sainty], our LGBT reporter, but what sets us apart is we have really good contacts in the LGBT community outside of the no and yes campaigns. We will all be on that story. It will be much like the election as we get close to it. It’s an issue that’s of interest to our readers.” 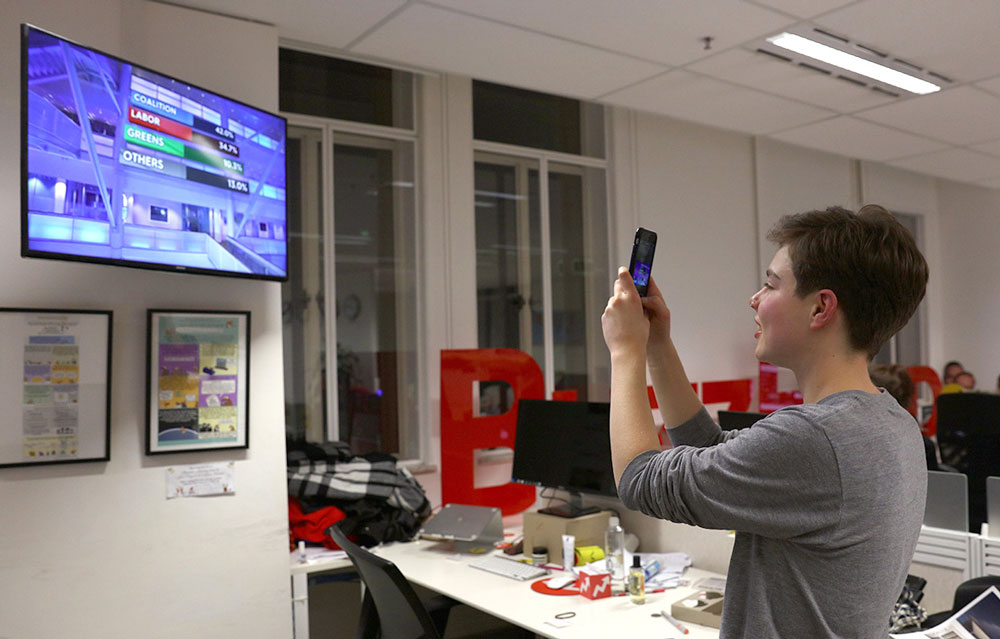 Throughout the election campaign, video consumption played a bigger role in BuzzFeed’s news reporting than it had previously.

“Our small newsroom is growing into news,” editor Simon Crerar explained. “We’re recognising that the audience we have, which comes to us for the fun stuff, is also deeply engaged with the world and wants to know what’s going on. We decided that we’re going to pivot into news video starting with the election campaign and pushing on afterwards.

“We’ll just see where we go with it. It’s not a thing that BuzzFeed has done too much of.”

An important lesson learned very early on for the team was to embrace technology that everyday people are familiar with. Crerar said that while it wasn’t an issue for the BuzzFeed team, people being filmed were often intimidated by professional cameras: “People are more engaged and keener to talk to you with an iPhone. They’re used to it. We’ve got a mic that plugs into the iPhone, a boom if we want it, and some extra light.”

The lessons that Crerar has learned through integrating video into BuzzFeed’s operations reflects the overall BuzzFeed ethos. As a publisher, BuzzFeed has been able to be nimble and produce a lot of content quickly and cheaply with its digital tools.

“Tonight, Mark did a live cross. We’ll have another one from him and from Alice later in the night. I was up the hill just then and there was a big ABC van with a satellite dish on top of it and millions of dollars of infrastructure to get a picture out of people’s TVs. Yet, we have the ability, through Mark’s phone, to get it out to two million phones of followers who have subscribed to our Facebook page. The barrier to entry has come down.”

Inside the BuzzFeed Australia offices on election night