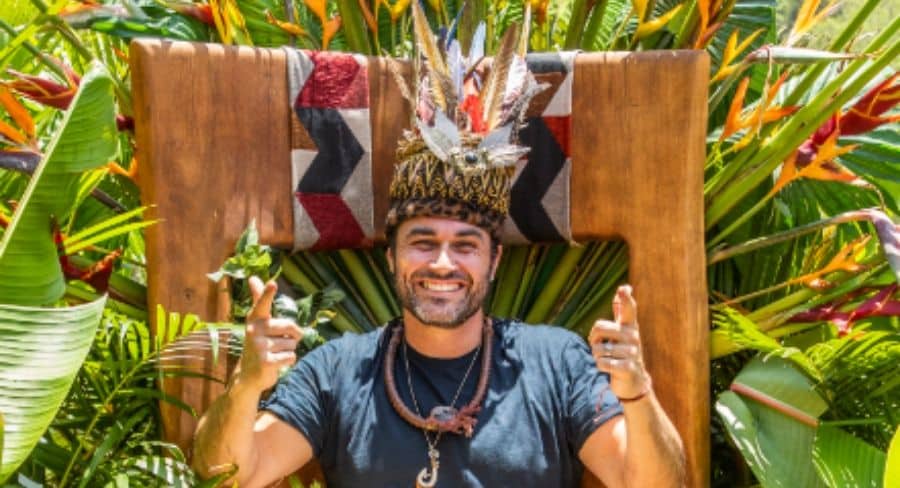 Last night on the I’m A Celebrity…Get Me Out Of Here! Season 6 Grand Finale, celebrity chef Miguel Maestre was crowned King Of The Jungle 2020, winning $100,000 for his chosen charity, R U OK?.

Maestre was the very first celebrity to saunter onto our screens, and from that very moment, Australia fell in love with the celebrity chef.

Warm, infectious and caring, he has a heart of gold which resulted in him being the resident camp chef, leader and dad.

Whether it was listening attentively to Erin Barnett opening up about endometriosis or comforting Tanya Hennessy as she sobbed, our sensitive Spaniard always put everyone else first.

Every night the celebrities raved about their dinner, with the talented and passionate chef putting a five-star spin on a mundane rice and beans.

From missing Ricky Martin’s call, to his strong views on Australia day, infidelity and pre-nups, Maestre proved he was as good of a sharer as he was a listener.

He wasn’t afraid to back down in a debate either.

When the topic of Tom Gleeson’s infamous 2019 Logie Awards campaign came up, Maestre challenged Dilruk Jayashina over the idea that it was just a bit of harmless fun.

Feeling Gleeson was making a mockery of an event that praises the pioneers in Australian television, Maestre said his good friend and colleague Amanda Keller was robbed of the prestigious Gold Logie.

Maestre competed in an impressive nine trials during his stint on I’m A Celebrity…Get Me Out Of Here! and no had qualms about jumping out of helicopters or pushing his limits to the extreme.

For Maestre, his participation in trials was fuelled by two reasons. One was to make money and create awareness for his charity, R U OK?, an organisation close to his heart and the other was to make his family proud.

From crying in the Tok Tokkie about missing his family, to breaking down seeing them crash camp, Maestre was always a blubbering mess when the topic of his loved ones arose.

After an emotional four weeks, the runner ups were ecstatic for Maestre to take the crown and win $100,000 for his chosen charity, R U OK?

R U OK? were also over the moon. R U OK? CEO Katherine Newton said: “Miguel has raised awareness of suicide prevention by highlighting the pressures of those in the hospitality industry and demonstrated what a difference an R U OK? conversation can make. We will use the funds to produce free resources for the industry to build on suicide prevention literacy and confidence levels to lend life-changing support when working or living alongside someone who is struggling with life.

“Both Miguel and Tanya Hennessy’s meaningful connections with their campmates reminded us all you don’t have to be an expert, just a good friend and a great listener. We hope their example will empower viewers to start a conversation with anyone they’re worried about.”