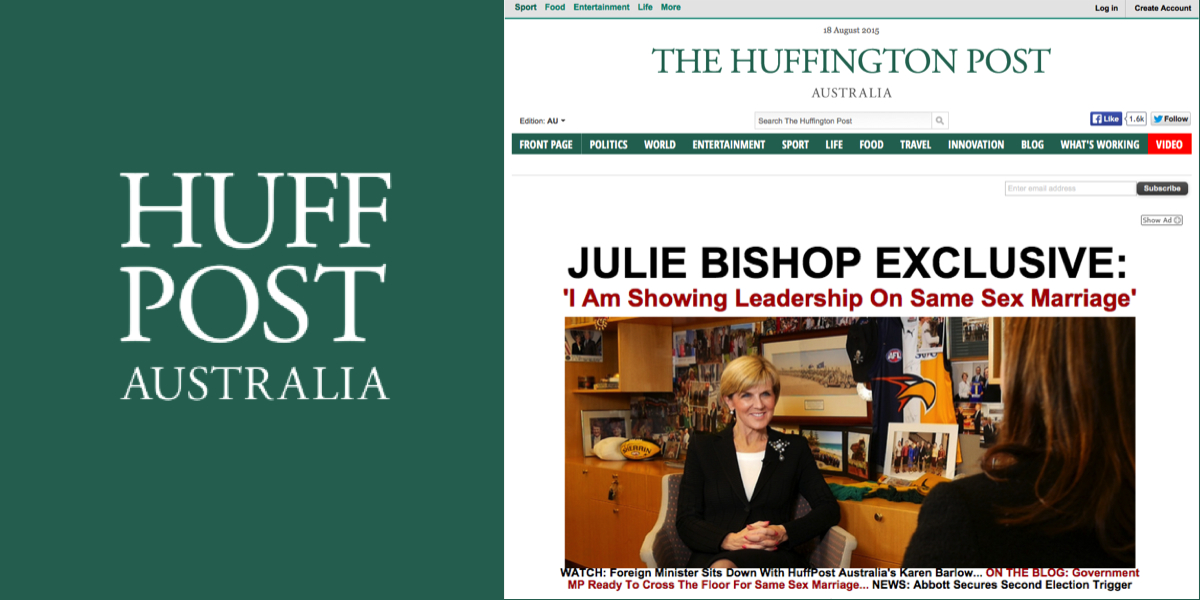 By Sally Rawsthorne
Although not slated to launch until tomorrow, Fairfax and The Huffington Post’s JV, HuffPost Australia launched this morning. Editor-in-chief Tory Maguire broke the news on Twitter, saying “So, we were ready a little early”. Multimedia is a clear focus of the sites, with the interview that informed lead story “I am showing leadership on same sex marriage” (about Julie Bishop) available to watch in full. Beyond Federal Parliament, HuffPost Australia’s launch home page looks at last night’s Bangkok bombing, the impact of the smoking ban in prisons, poachers in Sydney harbour and Jason Day‘s PGA win.

As well as news coverage, the first day of HuffPost Australia has 15 blog posts with catchy, clickable headlines such as “Will you civil union me?”, “I have smoked dope and I did inhale, that was the point” and “7 Steps to Ensure Your Renovation Doesn’t End in Divorce” from voices as diverse as NSW Senator David Leyonhjelm, The Block‘s Josh and Jenna, and Emma Watkins, AKA The Yellow Wiggle.

Furniture giant Freedom has sponsored the home page, with ads for its summer ’15 range taking the MREC and the leaderboard. Beyond the home page, advertising is less uniform, with various Mediaweek employees getting ads for Thredbo, Newscastle University and business insurance.

In a letter to readers on the site, Huffington Post founder Ariana Huffington said: “I’m excited to announce the launch of The Huffington Post’s newest international edition, HuffPost Australia. The 15th edition in our growing global network, HuffPost Australia will be dedicated to producing great original reporting about the critical issues that Australians face, and to telling stories that focus on helping Australians live more fulfilling lives, while opening up our blogging platform to voices from all across the country. HuffPost Australia will also be a rich addition to HuffPost’s What’s Working editorial initiative as we highlight people who are bringing fresh solutions to the country’s biggest problems. We can’t wait to open up the conversation around everything Australia can teach the rest of the world about the solutions, innovations and acts of compassion that all too often are left out of the media’s narrative.”

Huffington Post is trending on Twitter as we publish and has been among the popular trends in Australia since its launch was announced this morning.