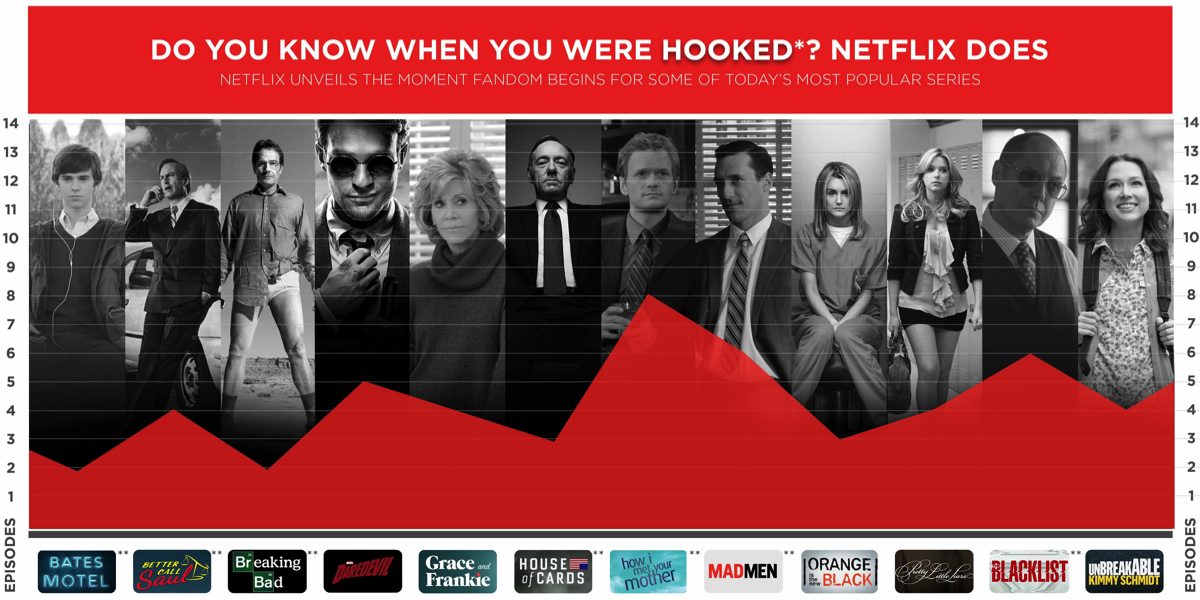 A Netflix research: What makes a viewers decide to watch a complete series?

It may have taken Walter White nearly an entire season to become Heisenberg in Breaking Bad and Frank Underwood 13 episodes to become VP (spoiler alert!) on House of Cards, but it turns out fans committed to these series long before those plot twists unfolded. Hint: it wasn’t in the pilot episode.

Netflix has analysed its global streaming data across the inaugural seasons of some of today’s most popular shows – both Netflix original series and shows that premiered on other networks – looking for signals that pointed to when viewers became hooked. It turns out that when commercial breaks and appointment viewing are stripped away and consumers can watch an entire season as they choose, you can see fandom emerge – that is when 70% of viewers who watched the hooked episode went on to complete season one – or, more poetically, when members were hooked and there was no turning back.

“Given the precious nature of primetime slots on traditional TV, a series pilot is arguably the most important point in the life of the show,” said Ted Sarandos, chief content officer for Netflix.

“However, in our research of more than 20 shows across 16 markets, we found that no one was ever hooked on the pilot. This gives us confidence that giving our members all episodes at once is more aligned with how fans are made.”

While the data identified the hooked episode, it was shy on pinpointing exact moments, but we have a few ideas of our own to help jog your memory… For starters, in Breaking Bad it may have taken the flip of a coin to decide whether Jesse or Walt would put the finishing blow on Krazy 8, but when the decrepit heap of a former drug dealer rains down from Jesse’s ceiling, there’s no denying viewers would stay to see how the season cleaned up (episode 2). Speaking of messes, Crazy Eyes drops both poems and fluids in her roller coaster romance with Piper in Orange is the New Black, but it was likely the throw of a pie to defend her (then) bae’s honour that had members asking for seconds (episode 3). For Dexter another episode equals another body, this time courtesy of the “Ice Truck Killer”, but our money’s on Dexter’s trip down memory lane reliving his inaugural kill that was the real tipping point – after all, fans never forget the first time (episode 3).

“There’s a unique sense of intimacy with creating a show for Netflix. Knowing you have an audience’s undivided attention and that in essence, they are letting these characters in their home, we unfolded storylines at a more natural pace,” said Grace and Frankie co-creator Marta Kauffman. “In episode four, we see Grace and Frankie having no choice but to confront their fear, anger and uncertainty head on, which to me as a creator was a nice turning point to shift the narrative to focus on the future instead of the past; it is nice to know viewers were there right along with us.”

While around the world the hooked episode was relatively consistent, slight geographic differences did present themselves. The Dutch, for instance, tend to fall in love with series the fastest, getting hooked one episode ahead of most countries irrespective of the show. Germans showed early fandom for Arrow whereas France fell first for How I Met Your Mother. In Better Call Saul, Jimmy McGill won Brazilians over one episode quicker than Mexicans. And down under, viewers prove to hold out longer across the board, with members in Australia and New Zealand getting hooked one to two episodes later than the rest of the world on almost every show. Despite these differences, the hooked moment had no correlation to audience size or attrition, regardless of show, episode number or country.

The data in this research was pulled from accounts who started watching season one of the selected series between January 2015 – July 2015 in Brazil, Belgium, Canada, Denmark, Finland, France, Germany, Ireland, Mexico, Netherlands, Norway, Sweden, UK and US and between April 2015 – July 2015 for Australia and New Zealand. A hooked episode was defined when 70% of viewers who watched that episode went on to complete season one. Hooked episodes were first identified by country, then averaged to create the global hooked episode. The hooked episode had no correlation to total viewership numbers or attrition.