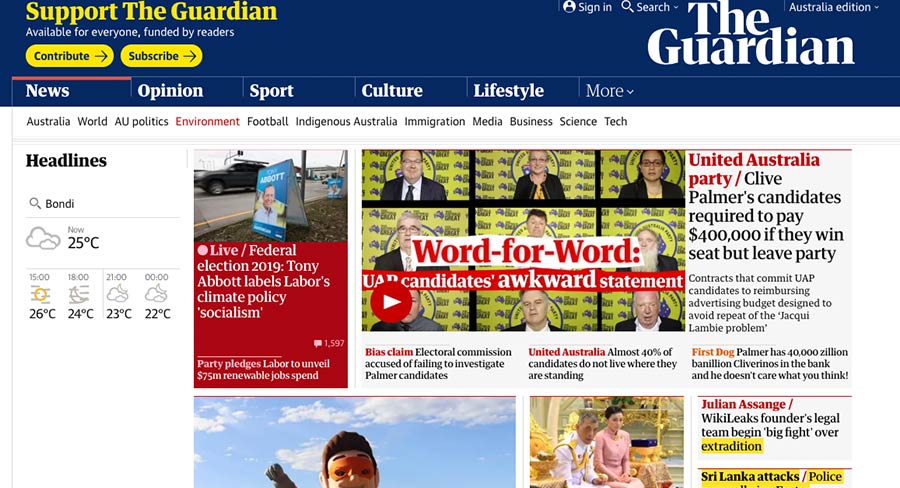 The Guardian now has over 655,000 monthly paying supporters

There are the highlights from their statement:

Three years of outstanding and award winning Guardian and Observer journalism has included a number of global and national exclusives including the Cambridge Analytica Files, the Windrush revelations and the Panama and Paradise Papers.

The Guardian’s audience has grown substantially with record number of regular readers and digital traffic. The Guardian had over 1.35bn page views in March 2019, compared to 790m in April 2016.

GNM has grown revenues across each of the last three years with revenue growth of 3% to £223 million in 2018/19. Revenues are now at their highest level for a decade.

GNM has achieved its break even goal delivering an operating profit at EBITDA level of £0.8 million.

The Guardian now has over 655,000 monthly paying supporters, across subscribers, recurring contributors and members, and an additional 300,000 one-off contributors in the last year.

International revenues have doubled since 2015/16 and continue to grow at double-digit levels per year. Both Guardian US and Guardian Australia are now financially sustainable.

GMG’s cashflow for the year is (£29)m, reduced from (£36)m in 2017/18 and (£86)m in 2015/16. At this level, GMG’s cash requirements are financially sustainable, falling within the expected long-term annual returns of the Scott Trust Endowment Fund.

The Guardian’s ‘relationship strategy’ was launched in January 2016 with a goal of creating deeper relationships with readers, increasing reader revenues, and reducing overall costs by 20%. The financial goal of the strategy was for GNM to break even at operating EBITDA level for year ending April 2019.

More people than ever before are reading, watching and listening to Guardian journalism from across the world. Over the past year the Guardian achieved record digital traffic with our highest number of regular readers and monthly page views averaging over 1.1 billion. In March 2019, a record month, the Guardian saw 163m unique browsers and 1.35 billion page views to its sites. The number of regular readers to the Guardian’s platforms has increased by 40% since 2016.

“In times of extraordinary political and economic upheaval the need for quality, independent reporting and commentary has never been greater. Guardian journalism is flourishing – holding the powerful to account and exploring new ideas.

“Thanks to the support of our readers and the incredible hard work and talent of Guardian staff, we have reached an important financial milestone. We are now in a sustainable position, and better able to deliver on our purpose by producing outstanding journalism that understands and illuminates our times.”

“Over the last three years we have made a huge amount of progress, and I’m exceptionally proud of how far we’ve come. Achieving these results is testament to the absolute commitment and ingenuity of everyone within the organisation. We are very grateful for the support of our readers, advertisers and partners who believe in the value of high quality media.

“GMG is now a more reader-funded, more digital, more international business. Although the significant turbulence in the global media sector shows no sign of abating any time soon, we have developed a set of core strengths which will help to ensure the Guardian’s ongoing independence and financial sustainability for the long term.”

GMG’s full audited financial results will be published in July 2019 as normal. A summary of key preliminary 2018/19 results is as follows:

Digital subscriptions across the Guardian’s premium app and tablet editions stand at 190,000.

Print subscriptions to the Guardian, the Observer and Guardian Weekly are at a record high of 110,000 in total.

• Advertising revenue has remained resilient in a challenging environment, with good growth in digital advertising. Advertising revenues grew by 3% in 2018/19. Print advertising now represents less than 8% of total GNM revenues.
• Guardian US and Guardian Australia have continued to find growing and loyal audiences in their markets. Both businesses are now financially sustainable in their own right, and have seen double-digit revenue growth in 2018/19. GMG’s international revenues have more than doubled since 2015/16 and we expect continued international growth in the year ahead.

The key goals of the strategy are:

Financial sustainability by ensuring cash requirements remain in line with the expected long-term annual returns of the Scott Trust Endowment Fund of £25-30m.