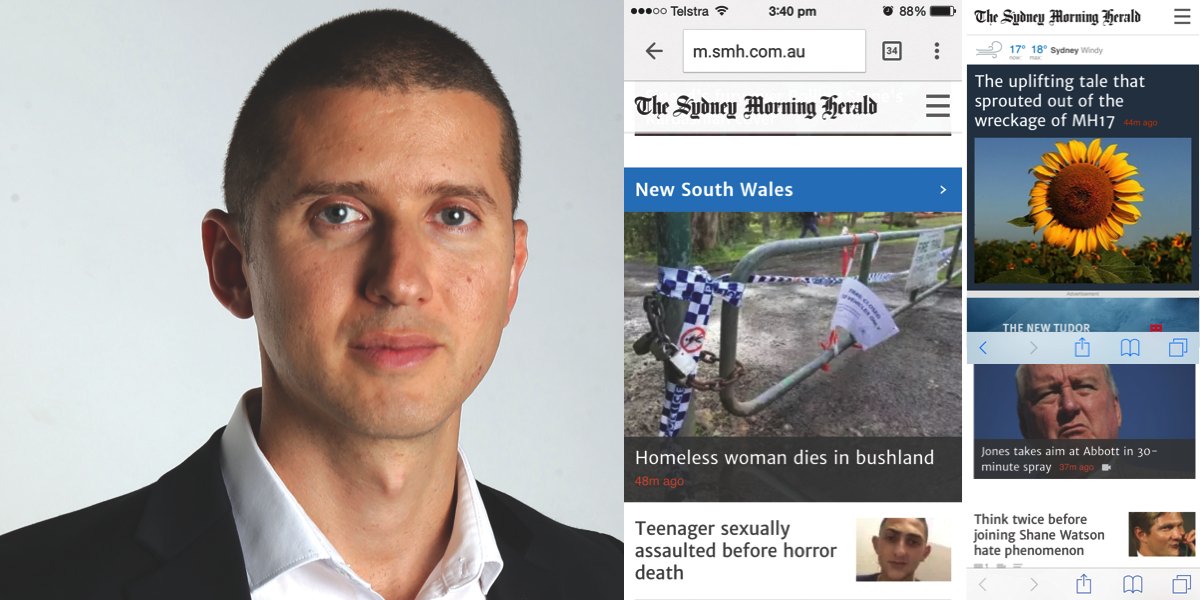 Getting to know The SMH and The Sun-Herald’s mobile editor Brian Brownstein: “A story will work well on any platform if it’s engaging and sold well”

We’re not only digital first now, we’re going mobile first too. A lot of our audience reads on the mobile, most of our users are on that device. Mobile is the screen these days,” The Sydney Morning Herald and The Sun-Herald’s inaugural mobile editor Brian Brownstein told Mediaweek recently.

“As such, it’s not just about using the device to house content, it’s about ensuring that the audience’s experience is just as good as that of someone reading the paper in print or on the desktop. We’re keen to optimise for mobile, and make sure that we’re giving a good service to everyone regardless of the type of device used,” he continued.

Brownstein said that The Sydney Morning Herald’s online content was developed with the mobile user in mind. “We are really focused on that mobile audience, and the way that our m site works. On the desktop site you have intros to hook people in – on the mobile, you don’t have that. You need to get your point across in a different way, and make stories interesting and appealing enough for our readers to click on them. We’re thinking about that when we build our stories.

“Traditionally, a story must be well-written for an audience to come to that. Thanks to pictures and videos, we now have other means of interesting them. The key for me is that a story will work well on any platform if it’s engaging and sold well. I don’t think there’s much of a difference [between desktop and mobile]. As long as the pictures or the words are compelling, then the audience will read it no matter what the platform for the story is.”

As such, Brownstein said that the Fairfax mastheads don’t have restrictions around the timing of its content. “We do notice a big mobile uptick early in the morning and when people are coming home from work, but that doesn’t mean that we will necessarily put shorter stories up earlier in the morning. An interesting story will be popular. I don’t subscribe to those arbitrary ideas that you can only have shorter stories on mobile and longer ones on desktop. Whatever the content though, it has to be quick to load and ready as soon as the user wants it. People are demanding these days, and they want content immediately,” he continued.

Accordingly, the Fairfax m sites are not beholden to data. “The real-time data is amazing – I can see how many people are on a story at any time, what the engagement rate is, how long the average person stays on a story, etc. We find that data really useful, but we’re not totally driven by it. We do use it to inform some decisions – we know, for instance, that people prefer different stories at different times of the day. People want to know what’s happening, and that’s why they come to The Sydney Morning Herald on mobile or on desktop.”

Although the mobile device is increasingly popular, Brownstein was quick to emphasise that it is exactly that – a device. “We don’t plan to separate our editorial across mobile and desktop and print, that’s probably too granular. The way that digital is going is it’s looking very much mobile-first, so we’re making sure that our site is the best that it can be. That’s our major focus at the moment. The thing about phones is that people always have them. It’s not a static environment – you’ve got your phone regardless of what you’re doing. What’s really exciting is that you can do so many things with so many people now. It gives real access to millions of people anywhere in the world at any time, seven days a week,” he enthused.

The inaugural mobile editor for The Sydney Morning Herald and The Sun-Herald, Brownstein has held a number of senior editorial roles at Fairfax including deputy editor and news editor for smh.com.au. Having started in sports journalism, he has been heavily involved in Fairfax’s digital coverage of events including the Olympics and the Football World Cups. When we spoke to Brownstein, his remit had just been expanded. “I’m still mobile editor, but I’ve just had a promotion so that I’m deputy digital editor too. When the digital editor is away, I look after the other digital platforms as well – desktop and social.”

Although Brownstein’s focus is editorial, he had a few comments on the mobile ad experience which has been notoriously bad since the rapid rise of consumption on that device. “There is a fairly general challenge that we face – apart from Facebook, every publisher is trying to figure out how to effectively monetise mobile. That’s the $100 million question, and is what every publisher wants to know. Our ad guys are constantly trying to encourage our clients to migrate to the mobile – it’s really important to them, because that’s where the majority of the audience is. That’s a big challenge for any company, having the majority of your audience migrate from one platform to another that you need to generate more revenue from.”